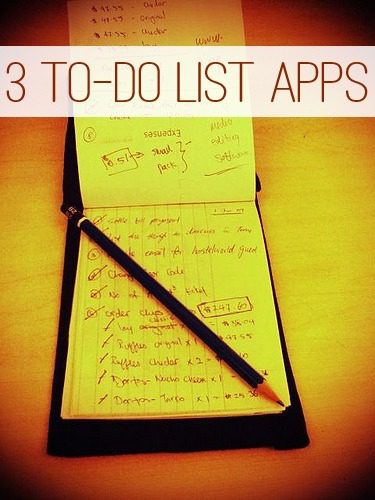 The following post is from Michelle of Mommy Misadventures:

I love making to do lists. There’s just something seriously satisfying about making a list and checking off the items one by one as you go. Being the digital junkie that I am, I was so excited when more robust digital task management services started becoming popular. Now instead of just creating digital to do lists, these task management services integrate with popular mail and calendaring applications for a far more organized experience.

Here are three of my top favorite to do lists that are available across the popular desktop and mobile platforms.

All three of these task management services are free to use but have premium service options.

Wunderlist is a sleek task management application that allows you to easily create and organize task lists. You can create recurring tasks, as well as a limited number of subtasks, and set priority. Wunderlist integrates with Facebook.

Wunderlist offers a premium option for $4.99 per month or $49.99 annually, which allows you to delegate tasks to other users, create an unlimited number of subtasks, and access to a variety of backgrounds. According to the Wunderlist website, file attachment for premium users is slated for future updates.

Astrid is a task management service with an easy to use interface. Task creation options include three levels of priority setting, task assignment (even to non-Astrid users) and an extensive notes and commenting feature. Astrid offers integration with both Facebook and Google. It also includes widgets for the Android platform.

Astrid offers a premium option for $5 per month or $50 annually, which buys you the ability to attach files (including PDFs, images, and documents), and voice backup and notes.

Since its launch in 2004, Remember the Milk has been a popular choice for task management. Compared to Wunderlist and Astrid, Remember the Milk’s(RTM)  UI is a bit clunky and dated, but its task creation and management options more robust than either Wunderlist or Astrid, offering location, tagging, time estimation, and URL options in addition to priority setting and notes.

RTM’s free service allows you to create tasks and lists, integration with Google calendar and Gmail, add tasks using Siri (on iOS devices) and task sharing. For $25 annually, RTM offers syncing with Microsoft Outlook, unlimited syncing between devices as well as the ability to use Android widgets.

Do you use an online to do list application to help organize your day? What’s your favorite?

Quick Tip: Use PrintJinni to Print from Your iOS Device