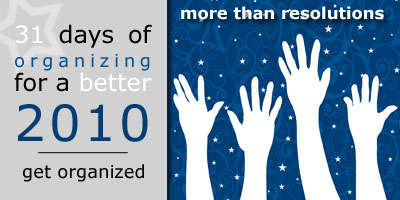 If getting organized — or finding better ways to organize — is one of your goals or resolutions for 2010, you’re not alone. It is definitely one of the top ten resolutions made each year. Earlier this week, I shared 5 quick tips to reduce clutter over at Fox’s iMag. Today, I want to look at 5 ways you can set yourself up for success when it comes to getting organized in 2010:

If you look at your home as a whole and write “get organized” on your to-do list, you’re going to fail. There are too many drawers, cabinets and crevices where stuff hides for you to tackle this project as a whole. Instead, start by choosing one room in your home. Now, pick one drawer or cabinet in that room. That is where you should start. Completely clean out, declutter and organize that space and then move on to the next.

Now, it is important to acknowledge that getting organized sometimes takes a more holistic approach. I prefer to empty out all of the cabinets and drawers in a room and then work on organizing and finding homes for everything from there. However, if you’re just getting started, approaching it in smaller tasks is a great way to set yourself up for success. There’s always time to reorganize and perfect your system later, but moving through each area quickly gives you a sense of accomplishment and builds a momentum that will help you reach your goal.

Tsh from Simple Mom is sharing 6 tips for getting organized today as well, and you’ll notice that starting small is the cornerstone of her advice too. We wrote our posts separately and without discussing them, but there’s a reason this is first on both of our lists. Trying to do too much or achieve perfection simply won’t work. It’s overwhelming and discouraging, and it will likely result in you giving up. Instead, start small and look at each step as an accomplishment that moves you closer to your goal!

If you truly want to get organized in 2010, there is no way around decluttering. You have to look at your stuff with a discerning eye and make the hard decisions about what to keep and what to get rid of. Even the most organized system loses its effectiveness when overwhelmed by stuff, and the less stuff you have, the easier it will be to get organized.

3. Give yourself a blank slate.

A common mistake when trying to organize a space is to simply move things around within the drawer or between drawers and cabinets. To create an organizational system that is easy to use and will last, try pulling everything out of the space you’re organizing. Set it on a flat surface such as the floor or counter so that you can see all of it at once. Then, begin grouping like items and thinking about where things should be put away so that you can easily find them.

Starting with a blank slate gives you room to start fresh without the constraints of your old system. It also becomes a motivating factor of its own. Because you start with a clean, uncluttered area, you’re more likely to think twice about every item you put back in it, which helps in the decluttering process.

4. Expect it to be an ongoing process.

Your organizational systems will naturally move from order to disorder if you don’t make an effort to maintain them. As I mentioned early last year when I was struggling with severe morning sickness and exhaustion, getting organized is not a one-time event. Rather than letting this discourage you, look at it as an opportunity. You don’t have to achieve perfection the first time around because you will be able to continually tweak your system.

5. Don’t fall prey to others’ expectations.

Finally, there’s a reason this blog is titled Organizing Your Way. I truly believe that getting organized will only last if you find a system that works for you. Sure, you could replicate a Martha Stewart system perfectly, and it would look organized. But chances are that you won’t be able to maintain it because it’s not your system and it doesn’t take your needs, preferences and lifestyle into consideration.

Don’t let yourself become discouraged by the idea that you have to achieve this organizing nirvana in order to be truly organized. Instead, create your own systems that reflect your personality and vision for the space. We’ve talked before about recycling different containers as storage for arts and crafts supplies, and you should think outside of the box when it comes to organizing every area of your home. You will be much more likely to maintain it if it meets your needs, even if it’s not a system you would see sold in stores!

Is getting organized one of your 2010 resolutions? Pick a drawer or cabinet and get started right now!

The 31 Days of Organizing for a Better 2010 series is sponsored by Get Organized Wizard. Find ready-made action plans, organizers and checklists for more than 200 projects in the Life & Goal Organizer.

Advice for Moms: How to Organize Proper Study Space for Your Child

Digitizing Your Paper Clutter with the NeatDesk