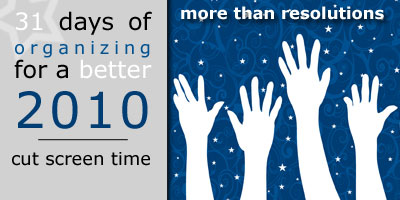 As a work-at-home mom, I’ll admit that my kids sometimes watch more TV than I’d like, especially during the cold winter months. To be honest, I’m not completely against TV. I’ve seen my girls play for hours with an idea sparked by something they watched, and they’ve all learned their phonics through LeapFrog’s Letter Factory. However, I do think the key is moderation, and it’s something that is a constant struggle for us to find that balance.

Maybe you limit your children’s TV time but find yourself watching hours each night and want to limit your own as well. Today, Sherri from Zen Family Habits is sharing her own story of turning off the TV and some tips for making it an easier transition. Although I usually do something while watching TV so that the time isn’t completely wasted, I’m inspired by her post to turn it off more often in the evenings as well.

Whether you’re looking to limit your children’s TV viewing or your own, here are my tips, from the trenches, on limiting screen time within your family:

1. Track how much you watch.

It always helps to start by tracking and writing down how much TV you’re actually watching. It can be motivating to see that number in writing and realize how often it gets turned on for just a few minutes and then left on indefinitely. When it comes to my own TV viewing, thinking about how much I could get done in the amount of time I spend watching TV is also motivating, even if I do try to multitask when it is on.

Think about your family’s situation and decide what your limits actually are. I know from experience that just saying we want to “watch less TV” rarely works; we need to set limits on what that actually means. At my house, our goal is two half-hour blocks a day — one in the morning and one in the evening, with one of those being an educational show like the LeapFrog movies mentioned above or a DVD from Planet Earth — plus one full-length movie a week. It may be that your goal is only to watch TV on the weekends or to only watch one movie a day. Really think about what you want those limits to be and define them in a way that is measurable.

Sometimes when we get stuck in a rut of watching too much TV, I declare a TV turn-off week altogether. Knowing that the TV is not an option makes my girls less whiny about wanting to watch it, which makes it easier to leave it off. Having it off for a whole week can also break the habit of turning it on because of boredom. It forces us to think outside the box for activities, crafts and games to keep us busy.

A system I’d really like to start using for TV time as well as computer and video games (which my girls are really just starting to play) is a token system where each token entitles them to so much time watching TV or playing a game. A token system takes you out of the equation as the bad guy. It also teaches kids to monitor their own time and make decisions about when they want to use it.

5. Watch movies instead of TV.

One of the reasons we prefer DVDs over the TV is that it’s so easy to just leave the TV on after one show is done. Before you know it you’ve  been watching TV for an hour or more. On the other hand, when a movie ends, it ends, and we usually only last so long with the repeating music on the splash screen before we turn it off. Another alternative is to record shows on the DVR and watch those so that, like a movie, it actually ends, which becomes a built-in reminder to turn off the TV.

As Sherri mentions in her post as well, a list of alternative activities is key. In order to limit your family’s TV viewing, you need to have a list of alternative activities ready to choose from. This should be a combination of activities the kids can do on their own as well as ones you do with them, but have enough ideas to get you through a week so that when the boredom sneaks in you’re not tempted to turn on the TV out of habit. Include crafts, games, baking, toy sets and outdoor activities.

I’ve found that physically unplugging the TV emphasizes our commitment to watching less and makes us less likely to turn it on as a boredom buster. Unfortunately, we use our TV for music pretty much all day — either turning on an XM channel or putting CDs in the stereo — but I want to get a separate stereo that we can use that when we want to keep the TV off.

Is limiting screen time one of your goals for 2010? What have you tried in the past? What are you going to try this time?

The 31 Days of Organizing for a Better 2010 series is sponsored by Get Organized Wizard. Find ideas, prompts and suggestions to motivate you to change in the Life & Goal Organizer.

4 Life Skills That Video Games Can Help You Develop

5 Ways to Make Working from a Home Blessing