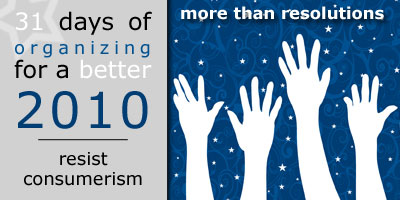 Before we can talk about ways to resist consumerism, we have to first define it. Without looking it up, I would define consumerism as an overwhelming focus or value placed on stuff. Today at Simple Kids, Megan is sharing her thoughts on consumerism, including an official definition of the term.

Resisting consumerism in a culture focused on consumption is not easy. And I’ll be the first to admit that there is plenty of stuff I like and would love to have. I don’t think that resisting consumerism and having nice things are incompatible, but it does mean that you put thought into the things you buy rather than just browsing a store and filling your cart with impulse purchases.

What this looks like for each family will be different depending on your personal choices and values, but regardless of where you fall on the spectrum, here are some tips to help you resist consumerism and become more intentional about what you purchase:

To get started, you have to define what resisting consumerism will look like for your family. Do you want to pursue a true minimalist lifestyle or simply avoid purchasing things that end up being discarded or given away six months later?

Start defining your philosophy by looking at the purchases you’ve made in the past that you now regret. What is it you regret about the purchase? How could you have avoided that mistake? What caused you to buy it in the first place?

2. Create a wait time on purchases.

Avoid impulse purchases that you end up regretting by waiting before making a purchase. Some people set limits on purchases over a certain dollar amount, but I’ve found that waiting is just as valuable for less expensive items.

For example, because we live in the boonies, we don’t run errands nearly as often as we used to. We do pick up basic groceries and necessities every week, but the other things on my “to buy” list don’t always make it on the grocery list. Sometimes I end up crossing things off altogether after a few weeks because I’ve realized we don’t really need them.

On the other hand, I’ve mentioned my new Kindle a time or two, and it continues to be one of my favorite gadgets. I’ve had it for about four weeks, and I’ve probably read more in the past month than I did last year. I’ve wanted a Kindle since Amazon first released it, but I waited and debated and researched to be sure that it was something I would really use and not just something to take up space on the shelf (it hasn’t yet even made it to the shelf because I’ve used it every day).  Even though I love it and can’t imagine going back, I don’t regret waiting on the purchase, and there are plenty of purchases I regret not waiting on.

As Megan mentions, it is so easy to feel discontented with what we have when we are bombarded with ads for things we need. Avoid commercials, shows that leave you discontent (such as those on HGTV) and catalogs to stop those feelings before they start. We also try to teach our kids how to handle the feelings when they do show up. A typical conversation in our home goes like this:

Daughter: “Ooh, Mom, look at that XYZ!! Can I have that? I really want that!”

Me: “Oh, wow, look at that. Sure, you can save your money to buy it or ask for it for your birthday!”

Very few of the “I want” items stay on their radar for very long. We don’t want to be the bad guys, always telling our kids they can’t have this or that, but we do want to teach them the danger of impulse purchases and the value of waiting before spending your hard-earned money.

4. Stay home or do outdoor activities.

Avoiding commercials and ads isn’t enough, though. One trip to the mall or Walmart, and you’re suddenly aware of all of the things you don’t have. Another side benefit of living outside of the city is we don’t run to the store multiple times a week. Sometimes our only shopping in a month is for the basics, and it’s so much easier to avoid impulse purchases when we avoid the stores altogether.

It’s always amazing to me how crowded the stores are on beautiful days. People get the itch to get out of the house when the sun is shining, but they just end up inside a store spending money. Instead of going shopping, go on a picnic or hike or head to the zoo or a museum!

I guest posted at Unclutterer last month, sharing four tips to help children fight clutter. When I opened up the conversation for additional tips, Tanna from Complete Organizing Solutions mentioned that one way her family fights clutter is to avoid licensed character products.

I’ll admit we went a bit overboard on Disney characters after our magical vacation, but Tanna is right — licensed products contribute to consumerism and clutter, as do collector’s items and other sets. It’s one thing to a build a collection of things you love, but buying Happy Meals every week just to collect the whole set of cheap, plastic toys is a marketing ploy that just results in more stuff.

There is some benefit to buying more expensive items. Gap clothing tends to be better quality and last longer than the clothing from Old Navy, for example. However, not only can you find off-brand items at department stores and places such as T.J. Maxx and Marshalls, but you can also purchase name-brand clothing from thrift stores and consignment shops without paying for the brand name.

Because thrift shopping requires you to invest time and effort to find things that you really want and like, you’re less likely to walk out with an armload of clothing that you feel like you have to have because of the clever marketing of stores.

What are some other ways you resist consumerism? What do you want to do differently in 2010?

The 31 Days of Organizing for a Better 2010 series is sponsored by Get Organized Wizard. Restore order and harmony in your home with The Ultimate To-Do List Pack, Home & Family Edition.

Question of the Day: What Are You Thankful For?

Self-Control: The Root System for a Good Life