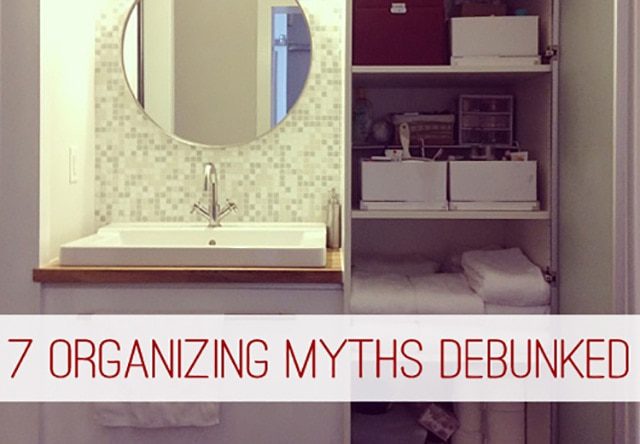 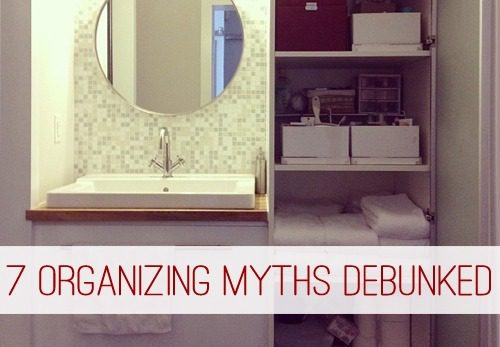 When it comes to organizing, there are many different reasons people say it’s just not for them. However, most of these stem from misconceptions about what it means to be organized.

Let’s take a look at the seven most common organizing myths and the truth behind them:

1. Organizing is only for type-a people.

One of the most common misconceptions about organizing is that it’s something only high-strung, type-A people do.

While it’s true that it might come more naturally, or even be fun, for those of us who fit that description, getting organized is a valuable tool for anyone. Not only does it allow you to be more efficient and more productive, but it also saves you time and money.

2. Organizing takes too much time.

Of course, some of you might be wondering how an activity that takes so much time can actually save you time.

In reality, getting—and staying—organized doesn’t have to take a lot of time. Of course, depending on the current state of your home, it can be overwhelming to figure out where you should even start. The answer is to start with one small room or area at a time.

Investing an hour to organize your pantry, or an afternoon to sort through your kids’ toys, pays off when you don’t waste minutes every day looking for certain ingredients or a half-hour trying to find the pieces to a specific game your children want to play.

3. Getting organized is frustrating.

Getting organized can be frustrating, but it doesn’t have to be.

I recommend a three-step method to organizing that starts with pulling everything out of the room or area you’re tackling. Next, sort everything into three piles—keep, throw away and give away. Then, start putting things away that you’re going to keep, thinking about what you need to be able to access, what you use most often, and what will work best for you.

Start with a small area so you don’t become overwhelmed, and put as much in the throw away or give away piles as you can. The less stuff you have, the less frustrating it will be.

4. Organizing has to be expensive.

I’ll admit I sometimes drool over all of the home organizing accessories and doodads that are available these days, all to make organizing easier and prettier.

But the truth is there are plenty of ways to organize that don’t cost anything, and if you’ve got a creative streak, you can still make them just as pretty. Be creative and think outside of the box about things you can repurpose or recycle in your quest to get organized. 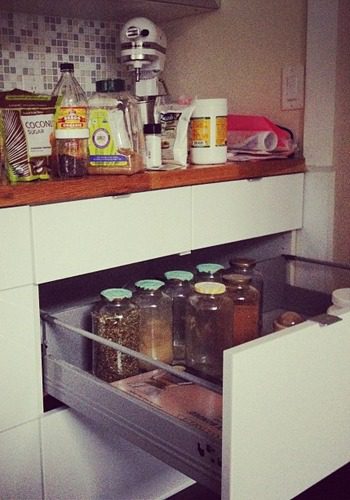 5. Once you organize your home, it just stays that way.

In many ways, this myth can be the most discouraging of them all.

If you’ve ever spent a weekend organizing, only to look back three months later and find everything in shambles once again, you know what I mean. For other people, the idea of having to organize again and again in order to keep your home in order just takes you back to myths number one and two and reinforces that organizing isn’t for you.

I’m not saying you have to invest hours upon hours each week to keep your home organized, though. Once you have a system in place, take just a couple of minutes each day to either put things away, throw them away or give them away so that you’re system isn’t overwhelmed by stuff.

6. A good organizing system will work for anyone.

Systems like FlyLady and The Clutter Diet have motivated a lot of people to get on top of their household duties and get organized.

However, the reality is that most people who follow these systems end up tweaking them to work best for their own life, and if you don’t realize that in advance, you can easily become discouraged by your inability to follow the system down to the tiniest detail. We all have different priorities, responsibilities and lifestyles, and if your organizational systems doesn’t reflect these differences, chances are that they won’t last.

7. There is a right way and a wrong way to organize.

The thing I stress most often to people is that there is no right and wrong way to organize. The right way to organize for your family is the way that works for you.

Dorothy at Urban Servant, who is the mother of 11 beautiful children, shared her laundry method a few years ago, and I think of it often because it perfectly illustrates this principle.

“I don’t fold anyone’s laundry but daddy’s. We have shelving with 12 laundry baskets in three rows, and I can toss clean items into anyone’s bin without too much effort. I sort a large load in about 3 minutes and move on to the next thing. Of course that means we don’t own anything that wrinkles or needs much special care, but I don’t miss them.”

This is a perfect example and one that I’ve used in the past myself. You should not feel guilty if the way you do laundry is to simply sort the clean clothes into separate baskets and call it a day. I’m a little too type-A for that system, and because it would drive me nuts, it’s not the right system for me. But if it’s the system that works for you, then stop feeling guilty about it and consider yourself organized.

What obstacles keep you from getting organized?

Organizing Your Way to a Simple Christmas: Christmas Cards

Homeschooling Your Way: Adjusting As You Go