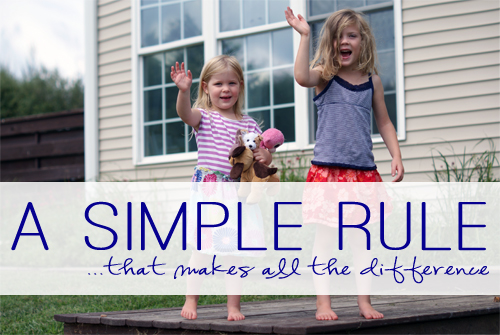 I recently heard yet another tragic story about a small child who was hit by a car in her driveway. It’s a story we hear all too often, and it breaks my heart every time because I know it could happen to anyone.

While stories like this are always accompanied by comments in public forums about the negligence of the parents (probably because we like to lay blame somewhere to make us feel better), the truth is that it happens in the blink of an eye to good parents all the time. It’s not about parenting; most often it’s about a small child making an impulsive decision to run towards a car simply because they’re excited.

I try very hard not to be a paranoid parent: We let our kids climb high, use glass containers and use public restrooms by themselves. We’ve never had the “stranger danger” talk (although we do have a rule that no one should touch the parts of your body that are covered by your bathing suit), and we actually encourage our kids to talk to strangers.

To be clear, it’s not that I don’t see the dangers in each of those situations; it’s that I work hard to be mindful of the dangers without letting them be so consuming that we stifle our kids’ development. (On an unrelated note, I’ve talked about our approach to free-range parenting in bits and pieces in recent posts, and I think it may be time for a full post on the subject!)

However, there is one area where I am absolutely, unashamedly paranoid, and that’s the danger of cars and kids, especially in your own driveway.

Because of this paranoia, we’ve always had a very simple, strictly enforced rule:

1. When there is a car coming down the road, you immediately come to the front porch or “bridge” (a wooden walkway at the top of 6 steps leading up from our driveway due to some crazy grading when our house was built).

2. If there’s a running car in the driveway, you park your feet on the bridge. Your feet are not to leave the bridge until the car is turned off and the person is out of their car (if they’re coming) or the car has left the driveway (if they’re going).

3. It does not matter if it’s Mommy, Daddy, a grandparent, an aunt or a friend. That is where you stay. No exceptions.


The rule is so strictly enforced from the time they are little that we don’t have to worry about cars coming up the driveway when we’re not outside with the kids (although we know about the car before they do 99% of the time because of the way our house is laid out, with a view of the road, and because we keep the windows open when they’re outside). And because the importance of this rule has been drilled for as long as we’ve lived here, our older girls make sure their younger siblings obey (and yell for us when they don’t).

Honestly, it’s actually pretty funny to watch them go scurrying when a car is coming!

There are two benefits to this, really: One, if their feet are on the bridge, they can’t be hit by a car. As long as they obey the rule, they’re safe. More importantly, if the driver is a family member or friend (as it is 90% of the time), that person can see and count the girls on the bridge to know that everybody is where they should be. While we still go slowly on the driveway, being able to see and count the girls while you’re driving removes that element of surprise if one of them dares to move from that spot.

If fact, this works so well for us that I actually prefer the girls to be outside when I’m leaving because I can see them on the bridge as I back away from them down the driveway. When they’re inside, we often have them sit at the window and wave (which also makes it easy to count them and know where they are), and we always make sure that the parent who is staying home knows where all of the girls are before the other person leaves.

Other versions of this rule include touching a certain tree or standing in front of the door. The key is having a single landmark where kids are taught to stand every time. And enforcing that rule even when it seems silly (“But you had stopped the car already, Mom!”) so that it becomes second nature.

As important as this rule is to us, nothing replaces the knowledge that there could be a kid in the driveway unexpectedly. It’s something you should be aware of each and every time you’re driving your car in your driveway or someone else’s because it only takes a split second for a child to make that impulsive decision that results in tragedy.

Does your family have a rule about cars in your driveway? Is this something you’re paranoid about?

My Everyday Road Trip & a Chance to Win FREE Gas for a Year!

Why Do You Take Photos?