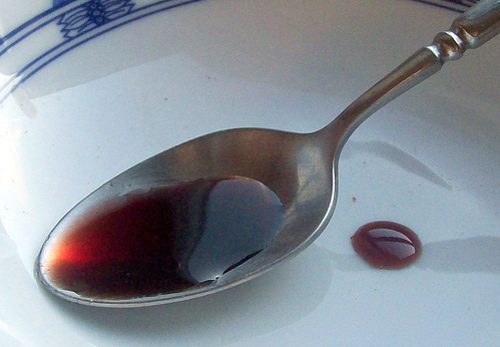 Last week I shared a bit about our journey toward using natural and herbal remedies. Today, I wanted to share some specifics about the remedies we’ve started using and how you can create a natural medicine cabinet. My original intention was to be very systematic about it and first focus on preventatives and then cold & flu and then first aid, etc.

But realistically, that’s a good way to get overwhelmed and discouraged, so I threw out that plan and decided just to tackle one little thing at a time as they popped up.

This post includes the changes I’ve made so far as well as some of my favorite resources for learning about herbal remedies!

A couple of months ago, Bulk Herb Store advertised on Life Your Way. At that time, I was incredibly impressed by the amount of free information they offer on their sites, including Shoshanna’s video series, which includes dozens of tutorials.

I began reading articles, watching videos and was really inspired to take some steps toward a more natural medicine cabinet.

Disclosure: I’ve partnered with Bulk Herb Store on this series, and in exchange they’ve sent me various products to use; however, I have also purchased products from them, and I truly believe that Bulk Herb Store is a reliable, high quality source for herbs, spices and more.

For recipes and tips, I absolutely love Michele from Frugal Granola’s ebook, Herbal Nurturing. Many of the recipes I’ve used come from her ebook, and I found them simple and easy to follow.

Because I’m just getting started, I haven’t invested in other reference books, but I know that as I get into more complicated remedies, I will want to have reference books on hand to be able to do my own research.

I’m planning to purchase both Rosemary Gladstar’s Herbal Recipes for Vibrant Health and The Green Pharmacy Herbal Handbook (with gift cards I’ve earned through Swagbucks!) to keep on hand because I find internet research to be overwhelming sometimes and both of those are considered pretty authoritative sources!

One of the first things we did was switch to raw honey in our kitchen not only for the health benefits (because it’s unprocessed, it contains so many good nutrients), but also to use to help soothe sore throats and tickle coughs.

This article from Bulk Herb Store explains the science behind the benefits of raw honey and lists dozens of uses for it (including as an antibacterial salve for wounds and burns!).

We now use raw, unprocessed honey regularly, and my girls look forward to an evening spoonful before bed when they’re sick (well, except our oldest, who is not a fan of the texture). I’m planning to use it to make homemade cough drops and mixed with cinnamon as a cure-all of sorts as needed too!

Vitamin D first began getting air time in mainstream media during the swine flu outbreak of 2009, but it wasn’t until this year that I really took the plunge and started giving it to my children regularly, both as a regular supplement and in larger doses at the first sign of illness. Here’s a great resource for understanding the role of Vitamin D, along with proper dosages, although it’s always a good idea to talk to your physician first, and you may want a baseline blood test to figure out your exact dosage!


Thankfully I haven’t yet had to use either of these, but since our family has had some rough goes with the stomach flu, I’m keeping them on hand.

In 2008, we had a bad case of the stomach flu, and my husband ended up in the ER, very dehydrated, on day 6 or 7. At that time, the ER doctor told us that electrolyte drinks often contribute to dehydration because of their high sugar content. Coconut water is an all-natural alternative, and I’ve heard anecdotal reports from several friends that this is their drink of choice for their family during illness.

Activated charcoal works to pull toxins out of the stomach (and can also be used as a poultice for bee stings) and can be used to speed up recovery from stomach flu, food poisoning or the ingestion of other toxins. In full disclosure, there seems to be a lot of disagreement on whether it’s effective in cases of stomach flu and food poisoning (there isn’t really any debate for other types of poisonings), but I figure it’s worth a try.

Here’s a great example of Shoshanna’s tutorials, as she shows you how she prepares activated charcoal for her family:

Simple is best, right? I’ve read over and over about the health benefits of both cinnamon and garlic and so both are making regular appearances in the things we’re eating these days. I’m all for strengthening our immune systems before we get sick so that they’re in a better position to fight illness!

Processed sugar is known to depress the immune system for up to 24 hours after consumption, while exercise is shown to boost it, so we’re reducing the sugar that our entire family consumes while also making sure the girls have plenty of space to play in our unfinished basement even once the bitter cold shows up and getting them outside to play isn’t as practical!

As I mentioned in my previous post, we used garlic oil in our 5-year-old’s ear to wipe out an ear infection last month, and it’s a remedy that we’ll continue to use. Debbie mentioned in the comments of that post that there is concern about introducing anything into the ear, but honestly, I’m more concerned about the effect of antibiotics on our family — and the world as a whole — with the development of antibiotic-resistant bacteria!

I used Michele’s recipe for garlic oil to make my own at home.

Elderberry syrup is an accepted remedy for cold and flu viruses, and while you can buy it, you can also make it easily at home. Although it can be used as a preventative, we’re planning to use it at the first sign of illness to boost our immune systems.

The idea of making a salve was a little overwhelming to me, but I’ve heard such great things about arnica for reducing inflammation that I decided to try Bulk Herb Store’s proprietary muscle salve mix. As it turns out, Sean and I haven’t needed to use it yet, so I can’t attest to whether it actually works, although I have rubbed it on the girls’ limbs a couple times when they were sore, and they at least say it does!

I’m also glad to have salve making under my belt, because it really was an easy process.

In the coming month, I’m going to try making cough drops, herbal teas and a sinus & sleep rub plus whatever else we end up needing along the way!

What steps are you taking to stock your natural medicine cabinet? Which seem easiest to you? What seems too complicated?

Spotlight – Improving Your Lifestyle with CBD in 2020