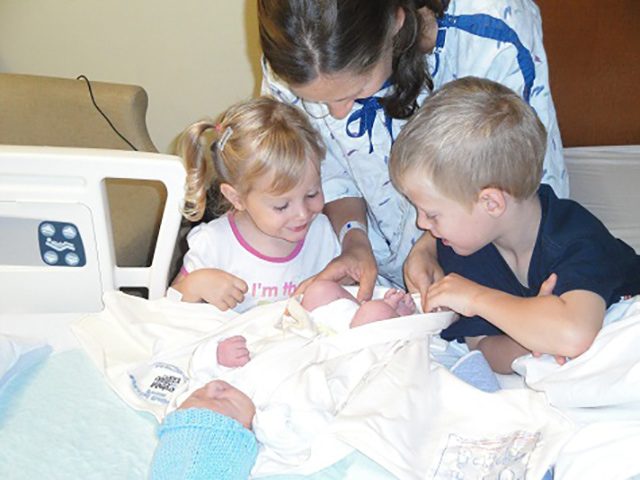 The following post is from Katie of Kitchen Stewardship: Are big families eco-friendly or a carbon footprint nightmare?

We all know that buying in bulk, preferably reusing containers when possible, is eco-friendly.

But when it comes to having children in Costco-sized portions, the environmentalists start getting testy:

That these earth-loving critics of large families see children purely as one more mouth to feed or one more being who will emit toxic pollution into the air their entire lives makes a lot of sense to parents of newborns, who probably feel pretty much the same way about their feeding/crying/pooping little blob of humanity.

Unlike pet plants or goldfish, these resource-sucking little beings will most likely grow up. At this point, we parents hope they fulfill their potential to be thinking, dreaming, creating, problem-solving, world-changing influences, not just another consumer of oil, natural gas, and food.

Each person has as much possibility of solving the world’s hunger issues and achieving world peace as they do to choose to over-consume and squander the wealth of the earth.

We can choose to live sustainably or not, no matter our family size.

I have five children, and I don’t even own a farm. Traditionally, big families were necessary to help with the harvest, and there was also an understanding that some children may be lost to disease. Now we have tractors, and everyone is going to make it through the winter.

Big families are very rare today. When I was growing up, it wasn’t uncommon to have a friend who came from a big family. Today, big families are like waterbed stores; they used to be everywhere, and now they are just weird. Admit it, whenever you see a waterbed store, you think, “Wow. That has to be a front for something illegal.”

—Jim Gaffigan in Dad is Fat

If we’re running out of anything here in America, it’s not resources—it’s restraint.

We drive wherever we want to go, turn on a plethora of lights and gadgets, eat big meals, and live in a disposable society.

We are not, as a general rule, gentle on the earth.

As Jim Gaffigan humorously points out, large families used to be the norm 50-100 years ago and no longer are. In fact, some countries are not even reproducing at replacement rates, yet the fear of running out of food in the future still reigns among those who believe in overpopulation.

The over-population advocates suggest that procreating beyond the replacement rate of 2.1 children per woman is reckless, irresponsible, harming the earth, and even selfish, but I disagree wholeheartedly.

In fact, I think the opposite may very well be true: Large families are an environmental dream come true and naturally foster a spirit of eco-friendliness.

There’s plenty of food and land on which to grow food, by the way. Our nation, with an ever-rising obesity and Type II diabetes rate, is in no danger of starvation.

More people on the earth won’t automatically send the world into a resource crisis and cause its quick demise. Here’s why:

Although humongous vehicles are an environmentally friendly no-no, many families of four and even five children fit in the same minivans their neighbors with 2.1 kids are driving. And when larger families do upgrade to the mondo-sized vehicle, they generally aren’t driving around all the time.

There are too many other things to do to be spending life on the road, so moms with big families learn to conserve trips, shop once a week or less, and simply can’t have all 8 children in an activity every weekday—and thus the Suburban sitting untouched in the driveway of a house full of children isn’t exactly guzzling gas more than the soccer mom’s who is constantly running around taking her two children to umpteen events per week.

Far from consuming resources like a vacuum cleaners, large families quite often reuse in the best “green” style. Each child likely uses the same high chair, crib, bouncy chair, and stroller, toys, and books. Hand-me-downs are going to be far more common when it comes to clothing than keeping up with the latest and greatest fashion trends.

So although a family of seven will eat more than a family of four, there are many, many resources that do not need to increase with each child.

Because of the economy of scale, big families can purchase food and supplies in bulk, which is easily the eco-friendly way to go, and they likely waste less food since there are more mouths to take care of leftovers.

Making larger meals rarely use more utilities than smaller meals—the oven or stove will be on for about the same amount of time, no matter how many lasagnas are baking or how big the soup pot is.

Large families are even an exercise in “living in bulk,”—meaning that their household is a “bulk” version of a smaller family. A house brimful with many people still consumes heating and cooling resources at the same rate as a house with fewer people and likely not much more electricity for most purposes.

Although the dishwasher and laundry machines will be run more often, moms in large families most certainly encourage the children to wear clothing more than once, motivated by ever-growing piles of dirty laundry. Lights, refrigerators, and entertainment appliances are generally shared by whoever is around, no matter if it’s one or nine. Living in bulk saves resources in the long run.

Let’s talk about the output of toxic fumes for which each person is responsible.

An individual’s carbon footprint is the idea that each bite of food causes a certain amount of energy to be used in its growth and transportation (and, therefore, subsequent pollution). Each time we travel we contribute to the pollution in the air and consumption of natural resources, and every item we consume (purchase) leaves its mark on the earth—a carbon footprint.

Certainly, each human being is going to have to eat a certain amount of food to survive, and the bigger the family, the larger that portion of the carbon footprint. But sourcing local food and sustainably raised meat (like the half cows large families can purchase that a family of 3 could never get through) is an equally effective way to reduce one’s footprint.

And although it isn’t always true, large families are more likely to be using natural family planning than tainting the water with hormonal birth control, which turns out to be a super big environmental and health issue.

Big Families Do More with Less

Bedrooms hold more children who learn to share space, showers are likely shorter per person because of scheduling necessities, furniture is often secondhand, and books, clothing, and even meals are made to stretch as far as possible. Large families, by their nature, tend to raise conservation-minded children. What better antidote to overspending and consumerism than a generation trained to spend less, waste less, use what is available and take care of what they have?

Raising a Generation of Treehuggers

Here’s Jim Gaffigan again to bring some levity to the situation: “I care about starvation in Africa, but I doubt the probability of our having one less child will somehow feed people. As for the carbon footprint, the seven people in my family live in a two-bedroom five-story walk-up apartment. Normally, you can’t walk three steps without running into someone. We don’t own a car or a pet farting cow. I can safely assume our carbon footprint is smaller than a lot of people’s.”

I’d never say that smaller families always have more disposable income or that only children are selfish beasts who will ravage the earth by default. That’s ridiculous and unfair.

I will say, however, that children from families larger than two or three are more likely than the average American to graduate childhood with a frugal “make do or do without” nature, a tendency to conserve resources and avoid frivolous waste, and an innate sense of stewardship of the earth simply because they were raised in an environment where they had to share and learn the lesson of the common good trumping the individual.

Whereas many claims that the problem of world hunger, pollution, and the decline of the global economy are directly related to overpopulation, I posit that over-consumption by the world’s richest—those who were never taught to share or conserve—is a much more direct cause of at least the first two if not the latter.

And in fact, if people don’t reproduce at least at the replacement rate, the global economy begins to fall apart because there aren’t enough working young people to support the retired elderly (Social Security, anyone?).

Your best investment in a sustainable environmental and economic future?

Why settle for less?

Let’s keep the conversation polite as if you have to share a room full of bunk beds with the other commenters in the thread. But I’d love to hear your thoughts on big families being “green,” an environmental hazard, or not a green issue at all…

For the inspiration for this post, I am indebted to Simcha Fisher, who wrote an article on this topic for Faith and Family Live in 2010. It has since disappeared as Faith and Family must have disbanded, but it’s a topic that has literally been on my list for four years.

5 Quick and Easy Ways to Green Your Home This Week

A Review of the Brilliant Earth Online Store