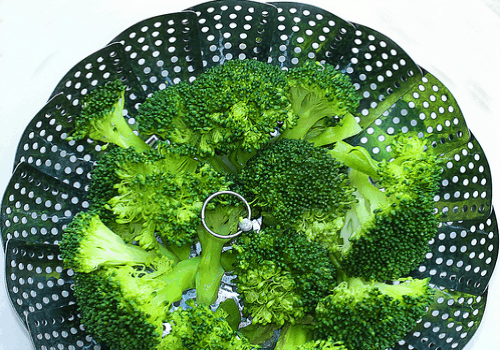 The following post is from Katie of Kitchen Stewardship: Does Your Organic Food Have Frequent Flyer Miles, Enough Heavy Metals to Be a Necklace or Both?

If you were startled by someone cheering in the freezer aisle at Costco last week, my apologies. That was me.

I was just excited that the frozen organic broccoli was from Ecuador.

No, I’m not some weird closet Ecuador stalker.

I was really just relieved it wasn’t from China because then I would have had a tough decision to make.

I like the organic frozen broccoli from Costco. Its quality is head and shoulders above the $1/lb. A bag of frozen veggies from any other store is organic to boot.

But previously, the product itself had been sourced in China. China, according to some, is no place you want to get your food. Organic, shmorganic. Some are saying that any food grown in (most parts of) China is far from toxin-free, even if it’s grown without chemical fertilizers or pesticides.

The story of food produced in China goes back much further than you might think.

It was in 2010 that Whole Foods was called out on the carpet very publicly for their 365 brand and the fact that “organic” certified food from China hadn’t even been inspected and should never have received the organic label. The Green Mama lays out the oxymoron: Only 1 % of food coming into the U.S. is inspected, and under Chinese law, foreigners may not inspect Chinese farms. Any quality control testing has to be done far away, so even Whole Foods’ own quality control testing can’t be very “farm to table.”

Organic food was questioned even a few years before that in this 2008 story, detailing levels of pesticides in organic ginger from China that were higher than is allowed even in conventionally grown ginger. At the same time, 15 out of 30 federally accredited organic certifiers were put on probation after an audit.

Laws for organic labeling allow for companies themselves to determine organic standards when the food is mixed together, whether in a processed organic TV dinner or just frozen mixed vegetables. The USDA or QAI certification team does not have to have inspectors on the farms in these situations.

Have there been any improvements?

Like all stories of public interest, the quality of organic food from China has ebbed and flowed. In 2012, Rodale reported that organics from China were facing greater scrutiny by the U.S.. The Seattle Times reported that U.S. Organic certification officials were visiting China more often than previously.

Is China a cesspool?

As recently as earlier this year, the Cornucopia Institute said food grown in China is “not good enough for pet food,” after concerns were raised about Chinese food imports here. The same old problem that’s been going on for at least 3 years (this story is remarkably similar in its points to The Green Mama’s above).

Natural News also nailed China as being nothing more than a “cesspool,” citing that “there is no limit to how much mercury, lead, cadmium, arsenic and aluminum is allowed in “organic” products.” This means that even if the organic qualifications are followed perfectly, with American inspectors on the farms, it may not matter in reality.

How does this work?

“Organic” certifies a process of how food is grown or produced. It certifies that the farmer doesn’t add pesticides, herbicides, petroleum-based fertilizer, metals or synthetic chemicals to the crop (among other things), and it certifies that the soil must be free from such things for a certain number of years before organic certification is approved.

But organic certification does nothing to address environmental sources of pollution such as chemtrails, contaminated irrigation water, and fallout from industrial or chemical factories that might be nearby. A certified organic farmer can use polluted water on their crops and still have the crops labeled “organic.”

For this reason: the environment in which organic foods are produced is critical to the cleanliness of the final product. (source – and it’s really one to read/skim the whole thing)

What’s a consumer to do?

Everyone has to eat, and we want the best for our families. What can we look for when even a USDA-certified organic label can’t point the way to non-toxic food?

This site has good tips for avoiding fake organic products, including watching for synthetic ingredients (avoid them), checking for verification with the Non-GMO Project, and seeking out Oregon Tilth organic certification, which apparently has higher standards. You can learn more about organic labeling here.

One obvious step might be to avoid food grown in China. There’s usually a source listed on the packaging in small print (although anything with more than one ingredient, even mixed vegetables, doesn’t have to list the country of origin).

While we’re looking at where our food is grown, we have to bring up another issue with buying food shipped halfway around the world. If seeking out organic food means we have to endure, as a global society, the ecological impact of food traveling thousands of miles, then the resources consumed in that trip must be part of our decision-making process. How much gasoline does it take to get five pounds of broccoli from China –or Ecuador — to Michigan? How much pollution is produced? Is it better environmentally to accept the pesticides sprayed in Indiana if it means my food only traveled a few hundred miles? Balancing these questions makes my head spin, and as with the fair trade chocolate question I wrote about a few weeks back, there’s no easy answer.

Is organic really worth it?

This is the real question to start with. Does eating organic food make a difference? To your health? To the environment?

There are organic pesticides – so are they less dangerous than conventional pesticides?

This writer says organics are too expensive and not worth the price at all, but the fruit flies in this experiment might disagree.

In all of this, the bottom line is what it often comes back to with food: Closer is better, try to buy local, and above all, know your farmer. If you ask the questions and you visit the farm, you can be assured that you know what you’re eating.

When you can’t buy local, it’s a judgment call on organics. See if you can figure out where the product is grown and go from there, keeping in mind the likely conditions in China. If you would get your well water tested before watering your garden with it,  you may want to consider staying away from Chinese food for now.

What importance do you place on organics? On the country of origin?

Are big families eco-friendly or a carbon footprint nightmare?

10 Steps to a Styrofoam Free World