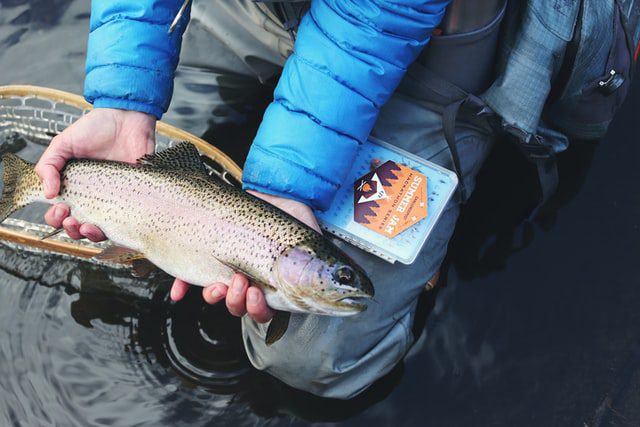 Photo by Sticker Mule on Unsplash

The following post is from Katie of Kitchen Stewardship: Does Your Water Have Estrogen In It?

Want to meet a transvestite fish?

Perhaps I should say “transgendered,” since fish don’t wear clothes or make their own choices on sexual preference. Unfortunately for a group of white sucker fish in Colorado, we humans have made some big life choices for them.

In 2004, scientists doing standard fish observations discovered a major problem: male fish growing female sex organs and eggs. Not only did half the male fish have female tissue, but there were five times as many female fish as males, to begin with, and the entire population was sterile.

Research associate John Woodling, in his fourth decade of doing biological research, said, “This is the very first time that what I’ve found scared me.”1

The fishy issue has been reproduced scientifically since then, and it was proven that it doesn’t take a large amount of estrogen to have a vast impact.2 Since estrogen has also been found in about 80% of American rivers3 and even in bottled water,4 this problem isn’t relegated to Colorado. Does that scare you, too?

How Estrogen Gets in Water

Most fingers are pointing at humans, naturally, as the cause of high environmental estrogen. Artificial contraception and hormone replacement therapy are generally the major culprits. The fact that women excrete these extra hormones via urine, which gets right back into our drinking water, means all of us with city water are as susceptible to problems as the fishes in the sea. In my book, that’s just another reason why natural family planning is a “green” option.

Unfortunately, there are other reasons for high estrogen in the environment5, including:

What are the Side Effects of Too Much Estrogen?

I get the heebie-jeebies when I read lists like the Symptoms of Excessive Estrogen:

See the full list here if you really need to know more. Some will say there’s no proof that estrogen or other hormones in our drinking water have any effect on human health and reproduction. Others claim that “vanishingly small” amounts may have a huge impact, especially if exposure is in utero.6

Even without charts and graphs, I can feel the reality of increasing infertility in our society just by living as a woman of childbearing age. The pressures are acute, and I don’t know that I need solid proof that hormones in the water cause reproductive issues and cancer. Some things just don’t feel right, and this is one of them.

Can Estrogen and Hormones be Filtered or Removed from Drinking Water?

There’s no easy answer for that one, as research is conflicting. In 2006 something called Fe-TAML was said to knock out all the estrogen, was questioned here the same year, yet was still a viable option in 2008, found to reduce estrogen in drinking water by 95%7 or even 98%.8 This study, also in 2008, found that a live wastewater treatment plant using something called a membrane bioreactor removed 98% of estrogenic activity.

Do Home Filtration Systems Remove Estrogen from the Water?

Within the home, “granular activated carbon filtration, reverse osmosis filtration, and nanofiltration all effectively remove the majority of [pharmaceuticals].”9

That said, most sources I read only cited reverse osmosis filters as capable of removing hormones like estrogen. There’s a decently long list of particles that carbon filters can’t even touch10, including bacteria, so it feels unlikely that they could handle hormones (just my guess).

Reverse osmosis filters have a couple of drawbacks, including having to run continuously using electricity, generating wasted water, and removing everything, including healthful magnesium and calcium salts that sometimes need to be added back in. Some say that even they do not remove hormones like estrogen from our drinking water.

As usual, the best medicine is prevention.

What You Can Do

Any time you’re seeking change, the first and most important step is always to start with yourself. Let your actions be an example to others while at the same time making a positive impact, no matter how small. Even though you’re only one fish in the sea, you want to be swimming in the right direction.

Continue to increase your awareness: hormones aren’t the only medications found in city drinking water. “The federal government doesn’t require any testing and hasn’t set safety limits for drugs in water,”11 so antibiotics, antidepressants, and much, much more could be in your next mid-afternoon cuppa.

Ideas for an Eco-Friendly Easter

Should We Stock Up on Incandescent Bulbs?