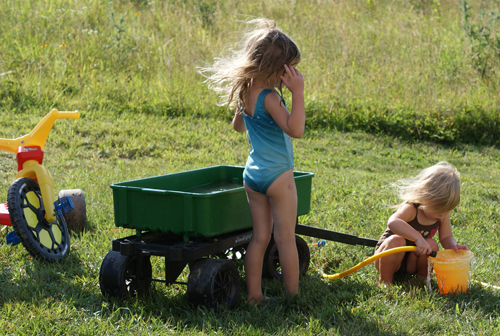 There are some great posts in the archives that don’t get much attention anymore, so I’m sharing my favorites to keep them from getting lost in cyberspace. I am constantly amazed by how much easier life is today than it was a few years ago, and I hope this will be encouraging for those of you who are in the trenches of the early years!

If I could tell my younger self one thing about life with littles, it would be this: The fun stuff gets easier with each passing year!

As kids get older, it certainly brings additional challenges — puberty and peer pressure, rebellion and attitudes — so I can’t say that parenting itself gets easier with each year.

But the fun stuff, like going on vacation or watching the fireworks? Those definitely get easier.

The activity that inspired that post was sending our girls out to play in the sprinkler. In years past, it has been a rare activity because it always took a lot more time to get four kids six years old and under ready to go out than they actually spent outside (kind of like playing in the snow during the winter months!). 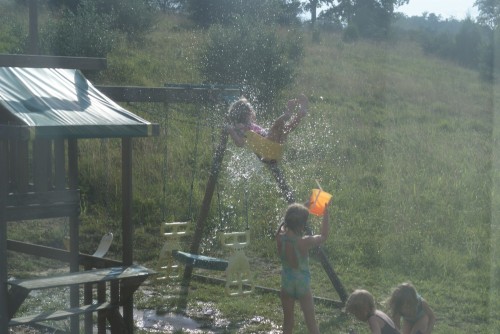 We call this our redneck water park!

This year, however, our girls have spent nearly every afternoon outside playing with the hose and the sprinkler, making mud puddles and mud pies, having water fights and more.

Our oldest three girls can get themselves into bathing suits, set up the sprinkler or hose on their own, and — when they’re done — dry themselves off and get dressed. Most of the time they’re more than happy to help the almost 3-year-old get ready too. And even though she never lasts as long as they do out there, having one kid come in after 20 minutes isn’t nearly as frustrating as having all four come in sopping wet right after we sent them out!

Don’t wish away the younger years.

To be clear, I’m not talking about wishing away the younger years and pining for the independent years; I’m talking about embracing the stage that you’re at!

If I could go back and give my younger self advice, it would be to not worry so much about trying to “do it all” with my littles. I would tell myself not to feel guilty that the sprinkler was a once-a-summer activity or that the cool craft supplies I bought ended up packed away in a box. 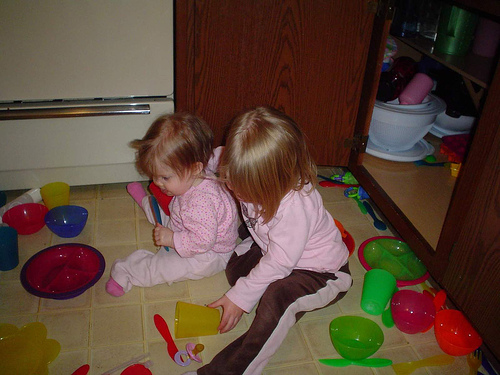 I’d tell the younger me to stick to simple things — like playing with bowls and spoons from the kitchen cabinet, cuddling to read Snug House, Bug House for the 27th time or pushing them in the stroller on a walk — instead of stressing about the things I wasn’t doing.

And I’d make sure I knew that it really does get easier, that in the blink of an eye they’ll be making their own peanut butter sandwiches, buckling themselves into their carseats, spending hours creating with the aforementioned craft supplies…

…and playing outside all day in the sprinkler without any help from me.

What fun stuff has gotten easier as your kids have gotten older?

My Job as a Hiking Guide

Plan Your Next Birthday Party with This Free Printable

On Documenting Our Life in Pictures