The other day I was looking through some old pictures, and I realized that once upon a time I actually had a hobby that didn’t involve a computer. Shocking, right?

Since we’re talking about fun food this week, I thought I would share some pictures of my hobby with you.

I used to love making themed cupcakes — for birthdays, holidays and just because. I haven’t made any at all in more than two years, but our second daughter turns 6 in just a couple weeks, and I’m going to make kitty cat cupcakes for her since we just got a new kitty and everybody’s excited about her becoming part of the family!

Click through the gallery to find out how I made each of these cupcakes. 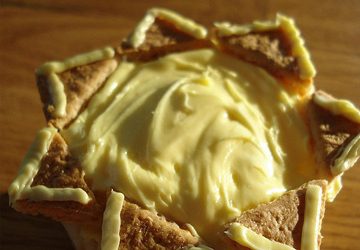 Directions:
Frost your cupcakes with yellow frosting. The beauty of these cupcakes is the frosting looks best when it’s got some texture and swirls to it, so there’s no need to frost it perfectly!

Use a sharp knife to cut small triangles out of your graham crackers. I found that a slow sawing motion worked best to keep them from breaking as I cut.

Arrange the graham cracker triangles around the outside of the cupcake, pressing them firmly in place.

Add a generous spoonful of yellow icing to a plastic baggie and cut off the tip. Carefully pipe around the outside edge of each graham cracker. 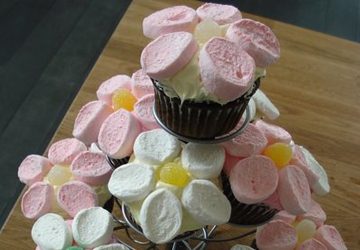 Directions:
Frost cupcakes and stick a gumdrop in the center of each one. Set aside.

Use a sharp knife to cut your marshmallows into thirds. They will be VERY sticky, but they’ll pucker, making them look like petals.

Arrange the petals around the gumdrops. 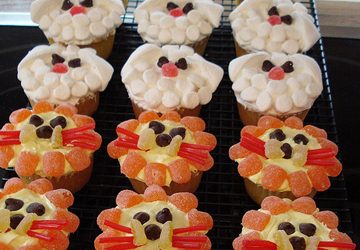 Directions:
{For the Lions}
Frost the cupcakes with yellow icing and add three chocolate chips for the eyes and nose. Set aside.

{For the Lambs}
Frost the cupcakes with yellow icing and add two chocolate chips for the eyes and a pink gumdrop for the nose. Set aside.

Cut the mini marshmallows in half (7-8 per cupcake). Cut the regular marshmallow in half along its length, then cut each half in half again diagonally for the ears.

Set the “ears” in place and fill in the rest of the cupcake with the mini marshmallow halves. 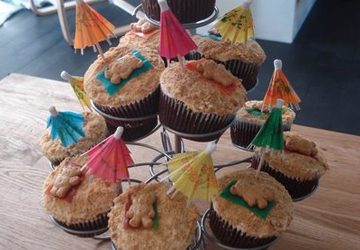 Directions:
Frost the cupcakes and sprinkle with graham cracker crumbs. Set aside.

Cut fruit roll-up strips into “beach towels”, approximately 3/4″ by 1.5″, to fit the teddy grahams. Position on the cupcake and lay the bear on top and press down. Add a matching beach umbrella. 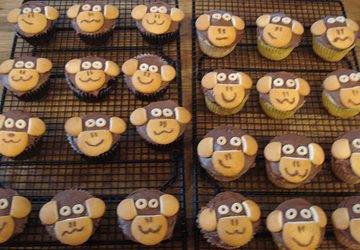 Directions:
Frost cupcakes and position two cheerios on each as eyes. Set aside.

Carefully cut one edge of each vanilla wafer (about 1/4 from the edge), one regular size and two minis for each cupcake.

Position the ears and mouth and press down firmly.

Add a generous spoonful of chocolate frosting to a plastic baggie and snip of the corner. Pipe a nose and mouth onto the big vanilla wafer. You can get creative here and add all kinds of expressions! 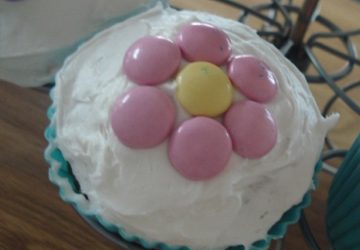 Directions:
Frost each cupcake and then arrange the M&Ms in a flower pattern on the top of each. Voila — simple but pretty! 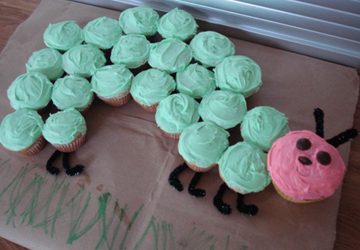 Directions:
Frost the regular-sized cupcakes with green and the large cupcake with pink frosting. Arrange three M&Ms or chocolate chips on the pink cupcake for the eyes and mouth of the caterpillar.

Cut a paper bag open and use it to cover a cookie sheet or piece of cardboard. Draw grass at the bottom and then arrange the cupcakes in the shape of a caterpillar body.

Add antennae and legs to the caterpillar with small pieces of black pipe cleaner. 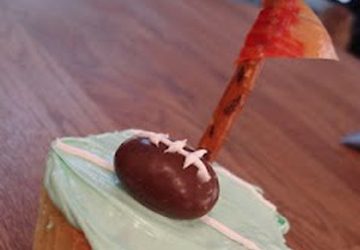 Place a large spoonful of white icing in a plastic baggie and snip off the tip. Pipe two field lines on the top of the cupcake.

Set a chocolate-covered almond on the “field” and pipe football laces onto the top.

Cut a small triangle from the fruit roll-up and carefully wrap the end around the top of a pretzel stick, pressing it into place. Insert the other end of the pretzel stick into the top of the cupcake. 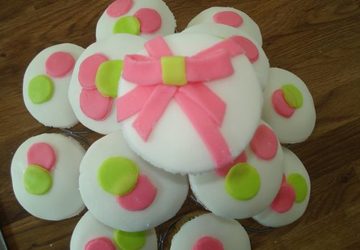 Carefully roll out the white fondant and use a large glass or round cookie cutter to cut out circles for the top of each cupcake.

Roll out the colored fondant and cut strips to form the ribbon and bows. Use a tiny circle cookie cutter to make dots for the remaining cupcakes. Press the embellishments onto the top of each cupcake.

How we’re getting our eating habits back on track