It’s been a while since we’ve gotten a new video game, and our girls were excited when we told them we had a new game to play! I have to admit that my favorite part was realizing that now that our oldest two girls are reading fluently, they’re actually able to read the instructions on the screen, which makes learning a new video game a whole lot less frustrating for all of us! 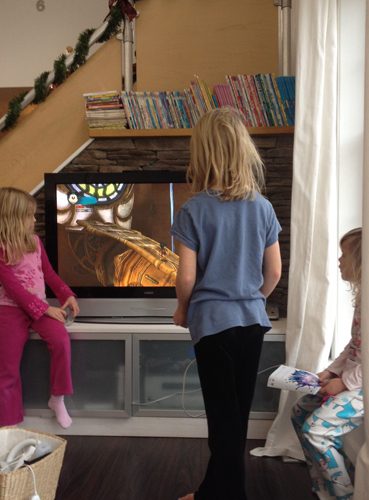 In Epic Mickey 2, Mickey returns to the Cartoon Wasteland to help Oswald save the Wasteland by repainting areas that have been destroyed and thinning the Mad Doctor and other evil characters.

Our 8-year-old jumped right in and was quickly able to figure out how to play the game, and the little girls were happy to watch her and follow along with the story. (Yes, we played in our pajamas; we got our first dusting of the year yesterday and they happily declared it a “snow day!”)

Although the game is a bit advanced for our younger girls (I’m sure in part because we don’t play video games that often), the “power of two” feature of this game lets you play as a two-player team, working together as Mickey and Oswald, so the little ones were able to play by partnering with our oldest or Sean or I. This co-op feature also makes this game about teamwork rather than competing against one another, which is a nice change since they spend plenty of time competing already!

I also like that while there’s a definite good versus evil plot line in the game — as Mickey and Oswald try to defeat the evil doctor and his goons — without violence, as the “fighting” is all done with the paintbrush and thinner.

All in all, this is a game we enjoy playing as a family, and I think it would make a great gift this Christmas!

This post is sponsored by Disney’s Epic Mickey 2: The Power of Two the video game.