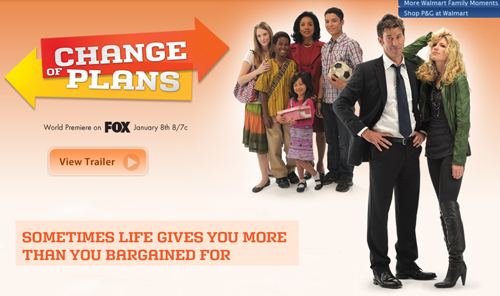 My husband and I had a chance to preview Change of Plans, a Family Movie Night special presented by P&G and Walmart that premiers tomorrow night (1/8) at 8 EST / 7 CST.

I know what your thinking, and we weren’t too sure either. We’ve watched quite a few made-for-TV movies over the past few weeks as our regular shows have been between seasons, and some of them have been just…well, bad. Poor acting, silly story line, cheesy scenes.

My husband rolled his eyes when I told him we needed to watch this movie last night, although he was a little more hopeful once he saw that Joe Flanigan, from Stargate Atlantis, and Phylicia Rashad, from The Cosby Show, had starring roles.

Turns out, this is a really, really cute family movie.

Brooke White does an amazing job, especially considering she was only recently discovered on American Idol, and the story is sweet, family-friendly, upbeat and funny.

From the official site:

Up to this point, Sally Danville’s life has played out just as she hoped it would. A beautiful and free-spirited musician, she and her fighter-pilot husband, Jason, live life on the go, free of domestic responsibilities.

But with a single phone call from Child & Family Services case worker, Dorothy (Phylicia Rashad, The Cosby Show), she learns that things don’t always go according to plan. Sally (Brooke White, American Idol) is met with the news that her best friend from college has died in a tragic accident on a Peace Corps mission and has named Sally the legal guardian of her four kids – 3 of them adopted from third-world countries.

Now Sally and Jason (Joe Flanigan, Stargate Atlantis) must quickly learn to parent this instant family and help the kids deal with the culture clash of life in America. The story is both humorous and heartwarming, revealing how fulfilling life can be when you look beyond your own plans and invest in the lives of others.

Click here to watch the trailer and enter to win a 55″ Vizio TV, 1 of 3 portable DVD players or 1 of 100 DVD copies with a bonus soundtrack CD from Moms4FamilyTV.com!

4 Simple Ways to Make Your Kids the Best of Friends

6 Things You Can Find in A House with a Toddler

Overnight Success: How to Be a More Patient Mom