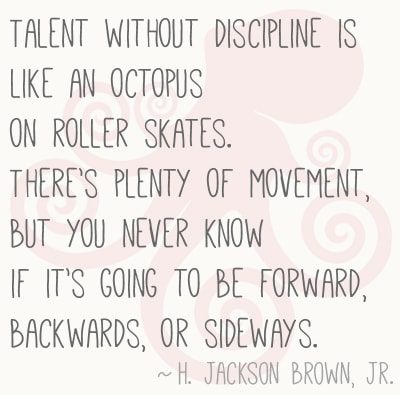 I’d rather not admit this out loud (I might ruin my perfect reputation — ha!), but I’ve spent the last 6+ months feeling very scattered.

While I thrive on keeping multiple balls in the air at once, I felt like my balls were all rolling around on the floor instead of gliding gracefully through the air, and I just couldn’t seem to get on top of anything, let alone everything. And when the first trimester morning sickness and exhaustion hit…well, then they all started to roll downhill, with me chasing frantically after them.

I’ve actually dealt with something similar several times — a kind of chronic exhaustion and fatigue that left me unable to focus — but I had learned to address those physical symptoms with vitamin D supplements and apple cider vinegar water, and this time it just felt like I’d lost my ability to manage my time and get things done.

Thankfully, my morning sickness and exhaustion began to fade just in time for our trip to Florida at the beginning of May, and even in the midst of family fun, relaxation and Disney, I was anxious to get home and get back to work, which felt good after a few months of dreading my work responsibilities.

When we got back, I mentioned to some friends that I needed to move back to a handwritten to-do list because using various apps and documents just wasn’t working, and the resounding response was, “YES! I need to do this too!”

Within hours of making that commitment (but before I’d actually taken the time to get off my tush and go find my notebook and write my list!), I came across this quote by H. Jackson Brown, Jr., which perfectly sums up everything I had been feeling:

Talent without discipline
is like an octopus on roller skates.
There’s plenty of movement,
but you never know if it’s going to be
forward, backwards, or sideways.

I can’t even describe the epiphany I had when I read those words. Despite the somewhat hilarious word picture they paint, I felt as if it had been written while watching me flail around for the past 6 months!

So I got out my notebook and did a huge brain dump, and then I began making to-do lists. Long-term to-do lists, monthly to-do lists (focusing on just one major project at a time), realistic weekly to-do lists and daily to-do lists to keep me on track. (The key for me, in addition to actually making the lists, is to keep my notebook open next to me so that there’s no ignoring it!)

It’s been about five weeks since I rediscovered my handy notebook, and I can honestly say it’s made a difference. I’m getting things done, checking off projects and feeling more productive in general. And that is a good feeling!

Do you have octopi-like tendencies? Does keeping a written to-do list help you stay on track?

Free and Fantastic Productivity Apps for the Android Mom

Keeping Up with the Little Things

Personalize Your Productivity: How to Create Your Best Productive Self