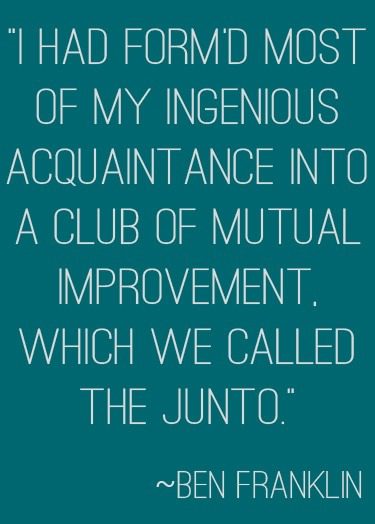 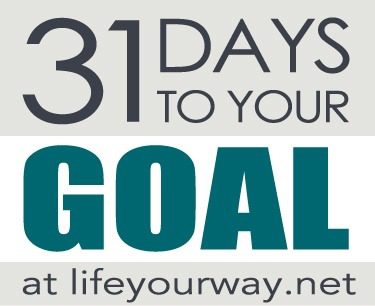 This is a tidbit I picked up from The Happiness Project, and I was excited to realize I do have “a club of mutual improvement”. Do you?

In case you can’t see the quote from Benjamin Franklin above, it says: “I had form’d most of my ingenious acquaintance into a club of mutual improvement, which we called the Junto.” In business, this is often referred to as a mastermind group.

Two-and-a-half years ago, I did a blog series called the 30-Day Giving Challenge with a group of bloggers. We formed a Skype group to chat through the details of the series, coordinate giveaways, etc. It was a diverse group of women — an unlikely group of friends, really — but here we are a few years later, having been through births and miscarriages, business launches and crises, marriage issues and kid worries, an election (which is significant given our diverse political views) and more, and our group is stronger than ever.

But this group is more than just a support group. While we don’t have an outline of rules or meeting minutes like Ben Franklin’s Junto, we’re not afraid to ask the tough questions, to force each other to look deeper, to encourage one another to do the hard things. And there’s not a woman in the group who wouldn’t say their life has been changed by being a member. Our viewpoints have been broadened. Our beliefs challenged and refined. Our visions sharpened.

Our Junto formed by accident, but Ben Franklin and Gretchen Rubin have both shown that you can form one intentionally as well, either around a specific interest or goal or for the broader goal of “mutual improvement”.

It takes a little bit of boldness to step out and invite people to a group like this, and it takes time for the group to find its rhythm, but it’s worth the effort if you’re willing to try!

Do you belong to a Junto or mastermind group that challenges you and helps you pursue one or more of your goals more intentionally?

5 Secrets to Motivating Yourself

3 Simple Words to Revitalize Your Work Style in 2013