The following post is from Emily of Live Renewed: Going Green vs. Buying Green 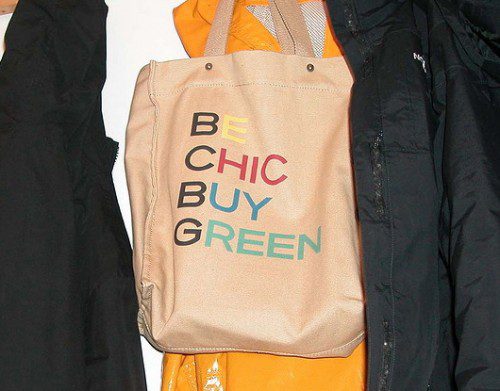 Earth Day was last Friday, and retailers everywhere jumped on the bandwagon by offering all kinds of ways to go green by purchasing their version of an eco-friendly product.

But, to me, going green is really about so much more than just buying “green” stuff.  It is more about lifestyle change than it is about consuming stuff.

I mean, I already have a house full of stuff.  And just because some of my stuff isn’t necessarily green, doesn’t mean that it’s not safe, or that I should just run out and purchase all new “green” stuff, and dispose of my old “bad” stuff.  That kind of defeats the purpose.

Plus, buying green stuff can be expensive.  It’s an unfortunate reality that most green and safer products are more expensive than their conventional counterparts.  Or, they often require a larger upfront monetary commitment.

Even though cloth diapers can save you hundreds, or even thousands, of dollars over using disposables, coming up with a couple of hundred dollars for the initial investment may not be possible for some families on a very tight budget. As Mandi talked about last week, each family’s level of going green is dependent on what season of life they are in.

These three “R’s” tell us what is really most important about green living.

Reducing the amount of stuff that you have, use, and consume.

When we have less stuff, we find we are content with less stuff. We are more intentional about the things that we do bring into our homes, we make sure they are actually things that we need and will use and love, and not just a “really good deal” or even the latest “green thing” to have.

We save money by buying less stuff, and this also allows us to be more conscious about the stuff that we do buy.  Purchasing safer products for our family, or items that are fairly and sustainably produced.

Less stuff means fewer raw materials needed to produce that stuff, less transportation of the stuff, and less packaging.  In my opinion, less stuff is all around good for the environment.

I’ve challenged myself to get rid of 100 items in April.  Even though we reduced our stuff by about half two years ago when we moved into our home, and have cleaned out and purged things since then, I am still amazed at how much stuff we have in our home that we don’t really need or use.

Reusing stuff you already have and making it work for you instead of running out and purchasing something new.

We can look at an item before we put it in the trash or recycling bin and try to come up with another use for it, like crafts for kids, reusing food waste as composting material, or glass food jars for organizing or other food storage.

Make an effort to use reusable items instead of disposable, whether fabric bags at the grocery store, cloth diapers, kitchen cloth, or reusable food storage containers.

Reusing can also mean passing your kids’ outgrown clothing along as hand-me-downs or accepting hand-me-downs from others.  Giving away stuff that you no longer need or use to charities, or having a garage sale.


Recycle, if you must.

While the first two “R’s” are the most important because they help to reduce the amount of stuff that we use and consume, recycling usually still means that we consumed something first.

For example, drinking water from a plastic water bottle and then recycling that bottle, instead of refilling a reusable water bottle.

We absolutely should recycle as much stuff as we can, instead of throwing recyclable items into the trash.  But, just like we should be working to reduce the amount of waste our families create, we also need to be careful that we’re not just consuming stuff because it is recyclable.

When we reduce, reuse, and recycle, we benefit both our wallets and the environment and create a mindset that is more about lifestyle change than about buying the latest and greatest “green” stuff.

Do you think buying green stuff is as important as going green?  How do you reduce and reuse instead of consuming more stuff?

Buying Used: How to Fill Your Home with Secondhand Stuff