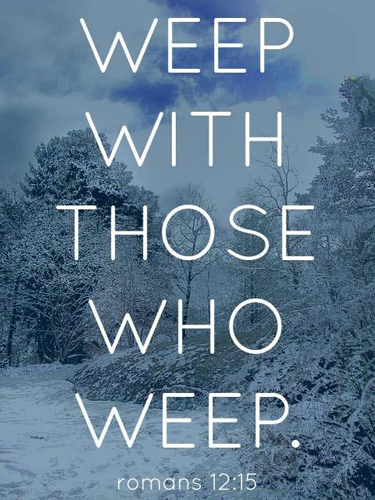 Today, many people in the blogosphere are holding a blackout. They’re not posting, instead observing a digital moment of silence for the victims of Sandy Hook Elementary.

While I love the heart behind that movement, silence isn’t the way I grieve and remember; talking and living and loving are. So we’re still posting here at Life Your Way today, but I do want to take a few minutes to share some of the posts from around the blogosphere that have touched my heart this weekend.

Newtown As I Know It:

This tragedy hits close, shockingly close, to our home. Within walking distance families currently nurse a private grief that I find unimaginable.

What disturbs me, though, is that most of you are hearing about Newtown for the first time. Please know that there is another side than the sheer horror of what you’ve seen.

There’s the truth–what life is really like here. And though we’ve only lived in this town for a year and a half, this place will be part of our family’s heart, and history, forever.

This is Newtown as I know it.

We know what six looks like. We know what it sounds like. How it cries and whines. How it sings and laughs. How clever it is and how much more clever it grows every day. How it sounds out words on signs as we drive past in the car and how happy it is when it gets them right. How annoying it sounds when it teases its little sister and how kind it sounds when it soothes her when she falls down and hurts herself. We know how lovely the words “Mom” and “Dad” and “I Love You” sound in its six-year-old voice.

“I can wear these pants,” he said, his tone increasingly belligerent, the black-hole pupils of his eyes swallowing the blue irises.

“They are navy blue,” I told him. “Your school’s dress code says black or khaki pants only.”

“They told me I could wear these,” he insisted. “You’re a stupid bitch. I can wear whatever pants I want to. This is America. I have rights!”

“You can’t wear whatever pants you want to,” I said, my tone affable, reasonable. “And you definitely cannot call me a stupid bitch. You’re grounded from electronics for the rest of the day. Now get in the car, and I will take you to school.”

I live with a son who is mentally ill. I love my son. But he terrifies me.

In Which We Need Pragmatists and Prophets:

In the night, we are the borderless chorus of mamas, we need a song, and so we hum old lullabies for empty beds with old Tinkerbell sheets. We’re watching with those who weep and wait for morning dawn relief, it will not come and our marrow weeps underneath the tragic optimism of our routine. We want to snatch our tinies up and run away somewhere, anywhere surely there is a place we can hide from this horror, the terrors of death.  But we wait until the bell, we turn off the news, we make spaghetti.

I’m also reprinting the list of those killed here.

I want to forget the name of the killer — and I won’t print it here on Life Your Way — so that he doesn’t go on to live in infamy, inspiring other would-be killers to follow in his footsteps.

At the same time, I want to know the names of the victims. To memorize them. To honor them as individuals and not just as a group of 26. To learn their stories and assure their families that they won’t be forgotten.

Staying as Informed as Possible, Despite Other Life Responsibilities