The following post is from James of Google+ Tutorials: 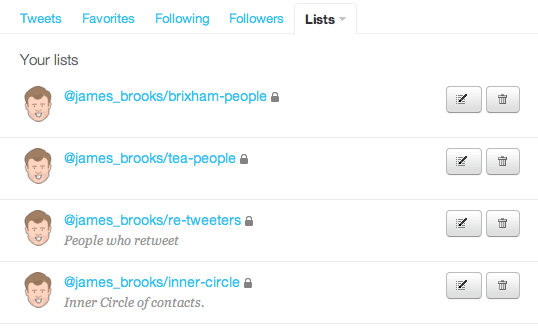 So you are running a blog and things are ticking along nicely. You are using Twitter as a way to interact with your community and promote your blog, smart.

The question is, are you using Twitter to it’s full potential and gaining a loyal following or are you just playing a superficial numbers game?

You see, for the first couple of years that I used Twitter, that’s what it was all about for me, numbers and “social proof”. I wanted people to see my Twitter account, see that I had a billion followers and think, “This guy is pro; I MUST subscribe to his blog.” What I didn’t really realize was that, actually, far more could be gained from Twitter than just a number.

The key to getting the most out of Twitter and using it to grow your blog dramatically is managing your followers more effectively. As far as I am concerned, the number one way to manage your followers well and use Twitter to it’s full potential is to start using lists and start using them well!

I personally use a couple of different types of Twitter lists which I highly recommend that you put into place too. Do it today! You will be super pleased with the results!

The following lists are lists that I personally use on a daily basis. It makes things extremely tidy for me, and helps me to specifically target and manage Twitter users who are going to help me to move my blog forward:

This, for me, is my most important list. In this list I put everyone who I want to interact with on a regular basis, and who’s tweets I don’t want to miss. This is the list that I check on a regular basis. It means that I can focus on specific people without the noise of the rest of the people that I follow on Twitter.

Anyone who ever retweets any of my tweets gets put into this list right away. This means that I have a list of people who are clearly interested in and appreciate what I am doing. I make sure to regularly check this list and keep up a relationship with these people. This means tweeting them from time to time, and retweeting any of their content that I find valuable and interesting.

I also start Twitter lists for groups of people who Tweet about particular niches that I am working in. This is a great way of finding out the latest news in a particular niche in a targeted way as well as offering the opportunity for you to engage in conversations with people easily about certain niches and convert them to loyal followers of your blog.

For example, I currently have a couple of niche group lists. One is for people who tweet about tea, as I am currently developing a tea blog. The other is a list of people who live in my town, as I am hoping to start some kind of local social media project.

Utilizing the lists feature is one way to use Twitter more effectively, and by focusing your efforts and managing your followers well, you will have a lot of success in growing your blog.

Do you already use Twitter lists? Perhaps you feel like I have left something out? Let’s have a conversation in the comments below.

How *I* Blog {My Interview at HowTheyBlog.com}