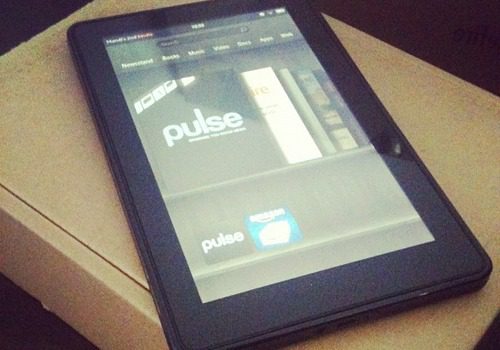 I don’t often buy the latest and greatest gadget right when they’re released.

Although I had an original Kindle, and I have both an iPad and an iPhone, I still have early versions of both of those devices, and I got all of them much later than many other people.

But I was so excited when Amazon announced the Kindle Fire — and impressed by it’s accessible low price — that I ordered one right away. And even paid the $3.99 extra for overnight shipping!

Which means that last Tuesday I got to be one of the first consumers to play with this nifty device!

To be honest, I was feeling a little stressed out and grumpy last week, and although I’d been so excited in the days leading up to the Kindle Fire’s delivery, I found myself frustrated by the differences between the Fire and the iPad and not really in the mood to try to figure them out.

Because of Amazon’s generous 30-day return policy, though, I decided to give the Fire a fair shot. I set my iPad aside (except for practicing our homeschool memory work because I haven’t taken the time to transfer all of that over to the Amazon Cloud yet) and focused on using the Kindle Fire.

At this point — just a few days later — I think I’m falling in love. There are still areas where the iPad outperforms, but there are others where the Fire wins hands down!

iPad Features That I Miss

While I’m actually really enjoying the Kindle Fire now that I’ve had time to get to know it better, there are a few features I am really missing:

At this point, I am leaning toward keeping the Kindle Fire as my personal device, while reserving the iPad as a family device for Sean and the girls and to use while homeschooling. I will continue to evaluate and personalize it over the next two weeks, and I’m confident that I’ll continue to discover features I love.

For someone who is debating between the two, I think the Kindle Fire is the obvious choice for someone who mainly wants a reader with options to browse the internet, check mail, listen to music, etc. For more heavier consumption or a devoted Apple user, the iPad may be a better choice…but with such glaring differences in their prices — $500+ for the iPad compared to $199 for the Kindle Fire — most users will be perfectly content with the Fire!

Have you had a chance to play with a Kindle Fire? What features do you love? What do you think it’s missing?

Quick Tip: Use PrintJinni to Print from Your iOS Device