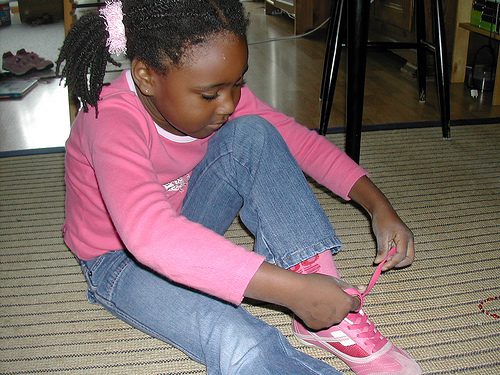 As a new mother, I was sure I would teach my daughter to use the potty before she was two and read at three or four years old.

What I’ve discovered as she’s gotten older and we’ve added more children to our family, though, is that I prefer the lazy approach to parenting, which is following my girls’ lead and (often) waiting until they’re older to teach those skills. Time and time again, I find myself starting something only to realize that it’s too much of a struggle to continue, and when I pick it up again later, the skill comes so much easier.

Over time, we’ve seen this play out again and again, and it’s become an important part of our parenting philosophy. For example:

A trap that I think we often fall into with our firstborn children is always looking ahead to the next stage and trying to move forward too quickly, but time and time again, I’ve seen how quickly they learn to do something if I just wait until the timing is right. I’m thankful for the experienced homeschool moms on the Sonlight Forums who stressed this philosophy in their conversations when I was just a new mom hanging out there to learn as much about homeschooling as possible. Because of their influence, it was easy for me to embrace this philosophy as my own rather than trying to stick with my early-is-always-better-pipe dream.

On the other side of the spectrum, I fully believe that our children are capable of more than we give them credit for. For example, we memorize a huge amount of information each week through the Classical Conversations program — things like the 8 parts of speech, the 7 types of biomes, Latin verb conjugation, and events on the world timeline. The Montessori influence in my life also means that they had daily chores, offered lots of opportunities to learn about topics that might otherwise be saved until later, and are trusted with things like glass and other fragile objects.

I think these things fit with my better-late-than-early philosophy because I don’t always expect them to master things right away; I just introduce a new concept and follow their lead.

So I guess you could say my educational philosophy — like most things in my life — is an eclectic mix. Rather than choose just one label, I’d define it as a mixture of better-late-than-early, early academics and child-led learning.

How would you describe your educational philosophy if you homeschool or your children attend school?

Why we homeschool year round (yes, even in the summer!)

Can You Get Your MBA Online & How?