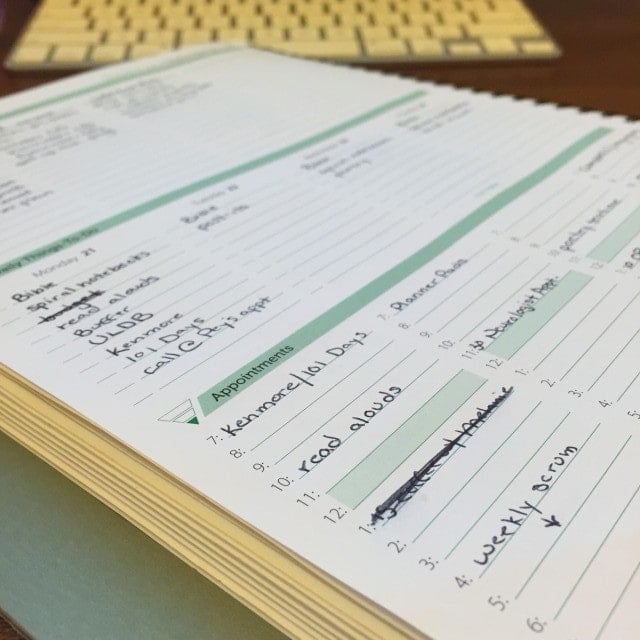 Like most of my fellow type-A’ers, I have a thing for office supplies, calendars, and planners. There’s nothing quite like turning to a fresh page in your planner or looking back at a page of completed tasks.

My problem is that I tend to get “planner blindness” after a certain amount of time, which means that every planner I’ve tried has eventually lost effectiveness for me, forcing me to switch to something new. I’m not quite sure why this happens, and it hasn’t been something I’ve been able to really figure out or control; I just switch systems when it happens and continue on my way.

My longest-running system was the Daily Planner from Invite.l, which I used for more than a year. Again, I’m not sure what happened, but ever since I abandoned that one, I’ve mostly stuck to Steno pads and notebooks for running to-do lists. (Because as much as I love planners, I don’t want to spend money on them just to shove them in a drawer after a month or two!)

However, at the beginning of August, Anne posted a picture of her planner on Instagram with a caption about organizing and recording all of her various scraps from the previous week as she began planning for the coming one. I was intrigued by the layout of the planner and the many comments from people who also use Planner Pads, and I immediately hopped on their site to get an idea of how it worked.

The idea is simple: each week gets a two-page spread that includes 7 separate to-do lists across the top, daily task lists in the middle, and appointments at the bottom. It works as a funnel, allowing you to write to-do lists by category or project, assign those tasks to various days, and give them a specific time slot on the agenda.

There is also a sidebar for calls to make and expenses (I use this section for grocery/shopping lists), a blank page for notes, and a full-page monthly calendar at the beginning of each month.

Because we’re so close to the end of 2015, they have a great selection of 2015 planners on sale, which seemed like the perfect way to try this system out for me. And I’ve been hooked since it arrived!

This planner has been a game-changer for me as I juggle Life Your Way, my work for Ultimate Bundles, homeschooling, tutoring, and more. I’ve always categorized my to-do lists, but I love that those separate lists are built into these pages so that I’m not guesstimating how much space to leave for each list or trying to create my own sections. And I love having a written calendar in my planner for scheduling appointments, making plans, etc.

It’s not a cheap system (which is why I recommend starting with a clearance planner!), but they do offer a money-back guarantee, and the difference it’s made has been worth every penny. Now, if I can just figure out how to make this one stick long-term!

Check out these printable planners.

Do you use a planner? Do you switch systems often or stick with the same one long term?

Moving Out of Your Home? Here is Why You Should Call a Junk Removal Service before You Move

Your Placement Guide to Pedestal Fans for Effective Airflow