The following post is from Shaina of Food for My Family and Olmanson Photography:

Soft, yeast doughnuts filled with a thick blackberry jam and topped with a lime glaze made an appearance at our house recently. This is how they came to be.

We were sitting in church, the organ music filling the room as offering plates were passed starting in the front pews. Next to me on the thinly-padded bench my son’s feet swung in time with the music – one, two, three, four. Back and forth.

As the plate passed from one hand to the next in our pew of six, he turned to me with bright eyes and long lashes wide open and hopeful. Then in a voice just above a whisper, “Mom, can we get doughnuts after church?”

We are not a doughnut family. In fact, I can count the number of times that we’ve been out for doughnuts together in any given year on one hand. This is not for a dislike of doughnuts. It’s hard to dislike fried dough when done right, after all. No, this is because some parent is picky about their doughnuts. Having had a good many great doughnut, just any old doughnut won’t do.

Equipped with my smartphone, the search was on. While we found doughnuts that day in s’mores and salted pretzel and bear paws the size of your face, it did nothing for quelling the craving. Instead, it only sparked a desire in a certain parent’s heart to create a doughnut that would live up to expectations, that would sit on the tongue rich and light and just sweet enough all at once.

That is how we ended up spending the next day off school making doughnuts. We mixed dough after breakfast and read while waiting for them to rise. We cut them out and colored during the second rise. Then as we snacked on leftover berries and handfuls of nuts, we prepped the last bits and set up the pan for frying just before lunch. There were no complaints. 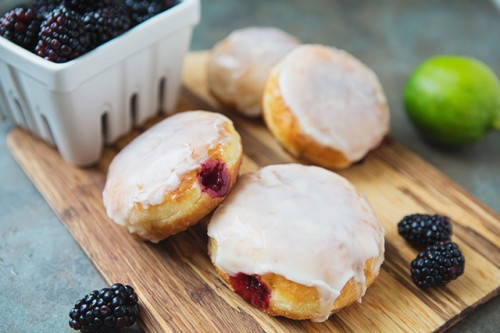 
Have you ever made doughnuts at home?

Healthy Foods That You Can Make Using A Rice Cooker

Brunch is in the Air: 9 Fabulous Brunch Recipes