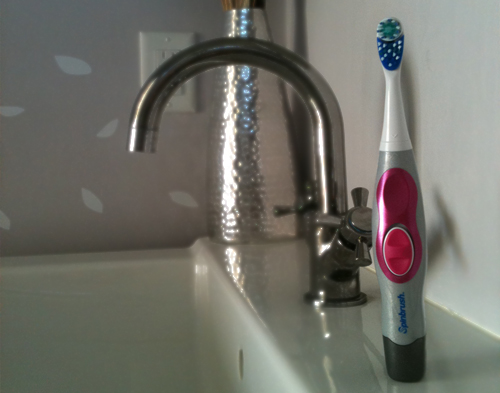 I’ve never been very good at the flossing every day thing (shh, don’t tell my dentist!), but we do care about keeping our teeth and gums healthy…not just so that they last, but also to keep the cost of our dental care as low as possible!

For us, that means brushing our teeth at least twice a day, avoiding sugary candy for the most part, and flossing a few times a week.

Enter the Arm & Hammer Spinbrush ProClean, which can also be an important part of a healthy oral care routine. In fact, it’s been clinically proven to remove up to 70% more plaque in hard-to-reach places!

A couple of weeks ago I mentioned that Sean was anxious for the chance to try the Spinbrush ProClean himself to see if it was as great as I’d made it out to be.

He’s a man of few words, so it took some prodding for me to get a full review from him, but here’s what he had to say:

Overall, he really likes the Spinbrush ProClean and plans to keep using it…so I guess I won’t be able to laugh at him in the mirror anymore!

The maker of Arm & Hammer products challenged me to switch to Arm & Hammer Spinbrush ProClean this summer, and they are giving away $12,000 in the Arm & Hammer Switch & Save Challenge Sweepstakes.To be entered to win one (1) of twelve (12) $1,000 prizes, simply reply to the question below!

Remember to join other Arm & Hammer Switch & Save conversations for even more chances to win.

This is a sponsored conversation written by me on behalf of Arm & Hammer. The opinions and text are all mine. Official Sweepstakes Rules.


Tags: taking care of yourself