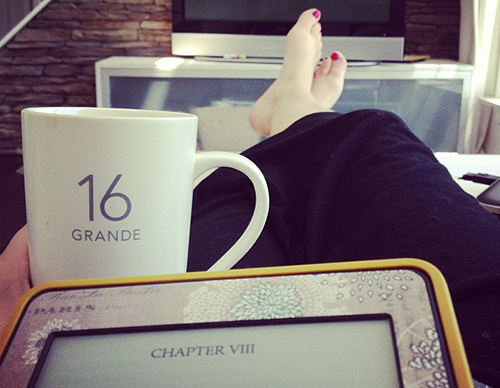 2013 was a good reading year for me. I’d hoped to hit 100 books read, and while I didn’t quite make it thanks to 6 weeks of severe morning sickness and several months of working doubletime to prepare for my maternity leave, I’m still pretty excited by what I read.

Looking back over this list, though, one thing I’m determined to change in 2014 is to only read the books I really enjoy. I read a few freebies simply because they were available, but I didn’t really enjoy them, and now I feel a bit like I wasted that time.

As always, my goal is also to read more nonfiction in 2014 as well. I really enjoy nonfiction, but it doesn’t provide the same escape that fiction does, so while my nonfiction wishlist is almost always longer than the fiction list, I move through them much more slowly. I started off 2013 reading two nonfiction books a month, and I think I’d like to get back to that level for 2014.

As for the lists below, I hate trying to categorize books because there are so many that could fit under multiple categories. Is Harry Potter children’s fiction or fantasy? Do I call Kindred historical fiction or science fiction? So instead of stressing myself out trying to come up with the “perfect” categories, I’ve just broken them down into Nonfiction and Fiction and listed them in the order I read them (or at least the order I entered them into GoodReads!).

At the bottom, I also made a reading list for 2014. I’ve actually started a lot of these books — before I decided that bouncing between 5+ books at a time just wasn’t my style — and a lot of them I’ve purchased when they’ve been on sale. There are a ton more in my Amazon wishlist, but some of those have been there for years, so I decided to just stick to the ones I am actually planning to read in the near future. Also, looking at last year’s reading list, I do a terrible job of planning out what I’ll read ahead of time!

And finally, as part of the all new Life Your Way (big announcement with details coming soon!), I’m doing away with both weekly and monthly reading lists. Instead, I’ll just be telling you about the books I read when they’re interesting enough to justify a post. Be sure to friend me on GoodReads for the books that don’t make the cut as well!

Psst…if you’ve posted a 2013 recap or a reading list for 2014, I’d love to read it — so I can fill up my wishlist even more, of course! Be sure to leave the link in the comments.

A Year of Biblical Womanhood by Rachel Held Evans

Love Does: Discover a Secretly Incredible Life in an Ordinary World by Bob Goff

The Happiness Project: Or Why I Spent a Year Trying to Sing in the Morning, Clean My Closets, Fight Right, Read Aristotle, and Generally Have More Fun by Gretchen Rubin

5 Days to a Clutter-Free House: Quick, Easy Ways to Clear Up Your Space by Sandra Felton

Kisses from Katie: A Story of Relentless Love and Redemption by Katie J. Davis

People Before Profit: The Inspiring Story of the Founder of Bob’s Red Mill by Ken Koopman

It Starts with Food: Discover the Whole30 and Change Your Life in Unexpected Ways by Melissa Hartwig

You’re Made for a God-Sized Dream: Opening the Door to All God Has for You by Holley Gerth

Forgotten God: Reversing Our Tragic Neglect of the Holy Spirit by Francis Chan

The Book of Business Awesome: How Engaging Your Customers and Employees Can Make Your Business Thrive by Scott Stratten

The Magician’s Nephew by C.S. Lewis

The Lion, the Witch, and the Wardrobe by C.S. Lewis

The Horse and His Boy by C.S. Lewis

Through the Ever Night by Veronica Rossi

Prince Caspian: The Return to Narnia by C.S. Lewis

The Voyage of the Dawn Treader by C.S. Lewis

The Maze Runner by James Dashner

The Silver Chair by C.S. Lewis

The Last Battle by C.S. Lewis

The Moses Quilt by Kathi Macias

Where Wildflowers Bloom by Ann Shorey

When the Heart Heals by Ann Shorey

Love in a Broken Vessel by Mesu Andrews

Touching the Clouds by Bonnie Leon

Palace of Stone by Shannon Hale

The Scorpio Races by Maggie Stiefvater

The Hunger Games by Suzanne Collins

When Love Calls by Lorna Seilstad

Pride and Prejudice by Jane Austen

Sense and Sensibility by Jane Austen

The Fault in Our Stars by John Green

The Assassin and the Pirate Lord by Sarah J. Maas

The Assassin and the Desert by Sarah J. Maas

An Untamed Land by Lauraine Snelling

Harry Potter and the Sorcerer’s Stone by J.K. Rowling

Harry Potter and the Chamber of Secrets by J.K. Rowling

Harry Potter and the Prisoner of Azkaban by J.K. Rowling

Harry Potter and the Goblet of Fire by J.K. Rowling

Harry Potter and the Order of the Phoenix by J.K. Rowling

The 4-Hour Workweek by Timothy Ferriss

THE QUESTION: Teaching Your Child the Essentials of Classical Education by Leigh A. Bortins

Jab, Jab, Jab, Right Hook: How to Tell Your Story in a Noisy, Social World by Gary Vaynerchuk

Looking for God in Harry Potter by John Granger

Hands Free Mama: A Guide to Putting Down the Phone, Burning the To-Do List, and Letting Go of Perfection to Grasp What Really Matters! by Rachel Macy Stafford

The Greatest Gift: Unwrapping the Full Love Story of Christmas by Ann Voskamp

Million Little Ways, A: Uncover the Art You Were Made to Live by Emily P. Freeman

Harry Potter and the Half-Blood Prince by J.K. Rowling

Harry Potter and the Deathly Hallows by J.K. Rowling

Bread & Wine: A Love Letter to Life Around the Table with Recipes by Shauna Niequist

Outliers: The Story of Success by Malcolm Gladwell

Hooked: How to Build Habit-Forming Products by Nir Eyal

Daring Greatly: How the Courage to Be Vulnerable Transforms the Way We Live, Love, Parent, and Lead by Brené Brown

What Alice Forgot by Liane Moriarty

Question of the Day: Do you judge books by their covers?