Her first taste of ice cream…after which she threw up all over me.

Amy recently shared her experience with discovering that her kids have “hidden” dairy intolerances.

Based on the number of comments she got and the questions I got on Instagram when I mentioned that I’m getting ready to eliminate dairy from my diet before Jackson is born, I thought I’d share our experience with nursing babies and dairy intolerances as well:

Our first daughter (who was mostly sunshine and roses) dealt with mild reflux from the time she was born and intermittent fussiness. Although I didn’t know much about intolerances and allergies at the time, I eventually asked to have her tested for a dairy allergy because Sean’s cousin had dairy issues (which they called an allergy, although I later learned that she’d never been tested to see if it was an actual allergy) until she was in preschool. The tests came back negative, and the allergist assured me that I could continue to eat dairy and she would grow out of her intolerance. Not knowing any better, I did, and she did. She was able to handle cheese and yogurt by about 9 months old, and whole milk at about 15 months old.

Our second daughter had similar issues, and I drastically reduced the amount of dairy in my diet for our sanity (she wasn’t quite as happy-go-lucky as her big sister!), but she also outgrew her issues on about the same schedule as her big sister.

Number three’s experience was also similar, although she wasn’t able to handle whole milk until about 18 months.

And then our youngest daughter came along and threw us all for a loop. Actually, I thought things were going about the same as they had for the other three, except she was extremely irritable and easily overstimulated from about 1 week old. She outgrew her need for Zantac (for the reflux) around her first birthday, and we kept her off most obvious forms of dairy because she would throw up after eating things like ice cream, cheese or drinking milk, but I was mostly perplexed and not too worried. At around 16-18 months, we realized her bowel movements were very odd. She was pooping 4-6 times a day, and they were pretty unpleasant diapers each and every time.

She would also have occasional screaming fits that left me in tears because she was so inconsolable, but we chalked most of that up to her personality while watching for any other signs that might point to autism or a sensory processing disorder.

Eventually we headed back to the doctor for another allergy test, but still it came back negative, so we just stuck with avoiding obvious forms of dairy—ice cream, yogurt, cheese, milk, etc.—and hoped for the best.

And then, at 18 months old she began one of her screaming fits one day while we were in the car, and it happened multiple times a day every day for the next week or so. She would wake up in the middle of the night screaming, scream in her carseat, scream in my arms. It was truly one of the hardest weeks of parenting I’ve ever experienced, and we were really at a loss trying to figure out what was the matter.

One night, after almost a week of this, I started to seriously consider that it could be related to the reflux we thought she had outgrown, and Sean ran down to the gas station by our house to get a pack of Tums. We broke one in half and gave it to her, and she immediately settled down and slept for several hours. When she woke up again, I gave her the other half, and it worked a second time.

The next day, we made an appointment at our pediatrician’s office (thankful for their weekend hours!) and took her in. I explained what had been going on the last week and asked for a new prescription of Zantac. She was also diagnosed with an ear infection, which can be caused by reflux. We made a follow-up appointment and took her home, and it really was like a switch had been flipped and we had our stoic (she’d never been particularly bubbly!) toddler back.

At our follow-up appointment, our pediatrician gave us a referral to a gastroenterologist but agreed that we could try an elimination diet before taking her as long as we were diligent about coming back and following up as necessary.

Out of desperation, we eliminated all forms of both dairy and gluten from her diet for several months. When we were ready to test gluten, we were relieved to realize that it was not the culprit, and she hasn’t had any issues with gluten at all since we reintroduced it. 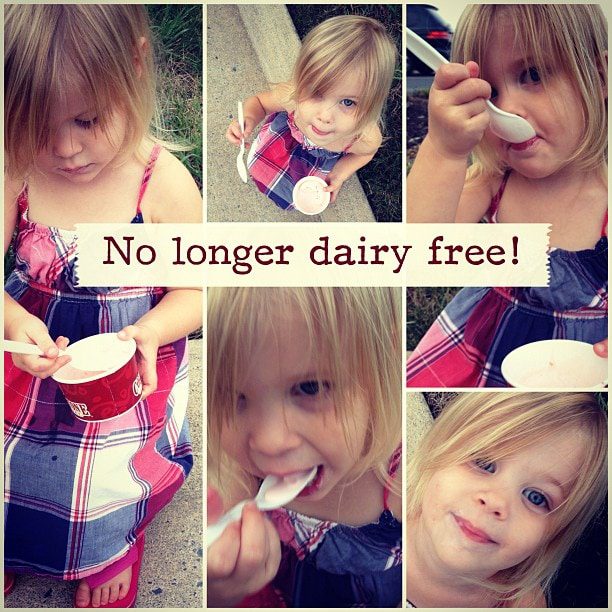 We kept her off dairy for several more months, for about 10 months total, before attempting to reintroduce it. During that time, she became a happier child, started sleeping through the night, and began to have regular bowel movements just once or twice a day. When we reintroduced it shortly before her third birthday, she handled it fine in both small and large amounts. (Interestingly, I discovered after my Whole 30 this spring that I have some dairy issues of my own. I had always assumed that our girls’ issues came from Sean’s side of the family!)

My biggest takeaway from all of this—and what I desperately wish I’d realized sooner—is that even when an allergy isn’t present, eating foods that your body can’t handle causes damage.

And the only way to really heal that damage is to completely, 100% eliminate the issue.

While our older girls did just fine with trace amounts of dairy, our youngest’s sensitivity was much more severe, and her body just couldn’t overcome it while she was continually being exposed to dairy protein, even in small amounts.

For this reason, I’ll be eliminating dairy before Jackson is born this time around. Because milk protein (and that’s what the intolerance is to in most babies and young children—the whey or casein protein, not the lactose) stays in breastmilk for two weeks or more, my plan is to start a Whole 30 at about 35 weeks. That should give us at least two weeks before he’s full-term and up to 4 or 5 weeks depending on when he arrives.

I will stay strictly dairy free until he’s at least 6 months old. No exceptions and lots of label reading because dairy is unfortunately hidden in a lot of foods. My hope is that we’ll avoid reflux and the need for Zantac altogether this time around and that we might actually get some sleep before he’s a toddler. But mostly, I don’t want to contribute to any longer-term problems, since I feel pretty guilty that Sidney had so many issues for so long simply because I didn’t know better!

(Edited to add: Our plan didn’t quite work as I’d hoped and at two years old, Jackson is still dairy free. We’re not sure why the dairy intolerance seems to get worse with each baby, but we’ve learned to live with it and we’ve still got our fingers crossed that Lucas will have an easier time than his siblings!)

Finally, to add to Amy’s list from last week, the signs of a dairy intolerance for us include:

Please note that I’m not a doctor and don’t play one on, er, the internet. This post is simply our family’s experience and not intended as medical advice, and I’d encourage you to do your own research and talk to your doctor if you suspect one of your children may have a dairy intolerance as well!

Has anyone in your family dealt with a dairy intolerance? Have you ever had to eliminate dairy while nursing?

{30} Real Food Changes to Make in Your Kitchen

How Important Is It, Anyway?