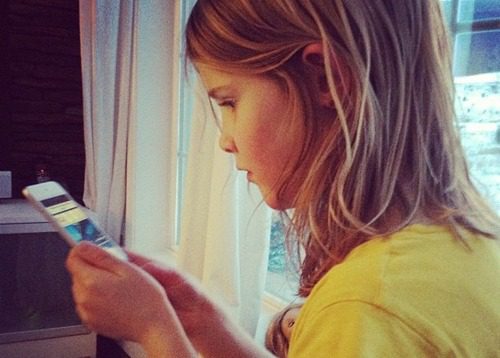 To be honest, I’m not exactly sure what the point of this post is. I’m not offering advice or really even sharing a story; mostly, I’m just trying to process my own thoughts and hear yours as well!

Let me start by saying that I’ve been a mom long enough to know that I know nothing about raising adolescents or teens. The one thing I do know is that, when the time comes, I likely won’t parent them the way I think I will from where I sit today.

That said, a lot of our girls’ friends (10-12 year olds) are starting to join social media sites like Facebook and Instagram, so I’ve been thinking about social media and what our approach will be over the next few years a lot lately.

Another thing I do know for sure is that — unless the law changes — our children will not be joining social media sites until they’re 13, as required by law. I know many people disagree with this somewhat arbitrary age requirement and believe that they as parents should be able to make that decision, but I just can’t bring myself to enable my kids to break the law in such a blatant manner (and to be clear, to join any of these sites, your child has to lie about their age, so it’s not exactly a grey area). That’s just not a precedent I want to establish.

But we’ve been resisting the kid-friendly gaming and social sites as well, and I’m not sure we’re going to change our mind on that any time soon either.

Because our girls are homeschooled, I actually think technology is a great way to enable interaction with their friends throughout the week, but I still find myself hesitant to really let them jump in with both feet…or even dip their toes in.

There are a few reasons I feel this way:

1. It is much easier to introduce them to technology later than it is to pull them back once they’ve already started.

2. We are really enjoying the benefits of our established 20-minutes-a-day of electronics time and all of the extra time it gives them for reading, imaginative play, etc.

3. I’d rather them use things like the ol’ fashioned telephone and letter writing or even FaceTime and emails sent from my account to interact with friends rather than instant messaging or static posts on a social media site.

4. Perhaps the biggest reason, though — which relates to #1 — is I have some pretty big concerns about teens and social media in general, and we’re not ready to introduce them to that world until we can come to peace with how we will manage and monitor that later on.

For example, the teen culture on Instagram is pretty fascinating to behold and somewhat scary, honestly. Most of the teens I know have hundreds of random followers (and there are even teen accounts with hundreds of thousands of followers). In fact, many teens caption their photos solely in hashtags for the purpose of getting more followers, and beyond the obvious concerns about inappropriate sharing, racy photos and being addicted to social media, the popularity contest aspect of it worries me.

I know how hard it is for me not to get caught up in likes and comments on my photos and posts, and I don’t necessarily want my girls to start worrying about that in the midst of developing their self-confidence!

On the other hand, there are teens like imhannahnicole (Rachel from Finding Joy’s daughter) who are posting gorgeous photos, poignant thoughts and more and using Instagram to display their art and talent in a way that seems really healthy to me, so I’m not opposed to social media altogether. Instead, I’m just trying to figure out how you establish those healthy habits, and my gut feeling is that it doesn’t happen through early exposure but through holding off until they’re really able to handle it in a healthy way.

But I’m trying to avoid the forbidden fruit phenomenon as well, so I think it’s a delicate balance!

Now it’s your turn: How do you feel about kids and social media? Do your preteens use social media sites despite minimum age requirements? What rules will you establish for social media and teens?

Question of the Day: How Many Open Windows?

Quick Tip: Use Hotkeys to Save Time & Keystrokes