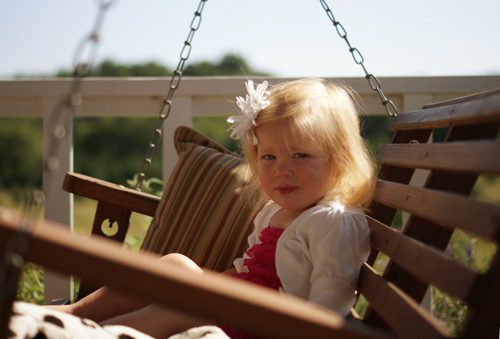 Our Baby Girl has never been a happy kid. She was colicky as an infant, and at two years old, I’m not sure she’s outgrown it yet!

As an infant, she had definite dairy sensitivities, just like our other three girls, and I eliminated dairy from my diet while nursing. She was on Zantac, which helped some, but not completely. And unlike my other girls, she didn’t really seem to outgrow it, so at two years old, she’s still dairy free.

We weaned her off Zantac shortly after her first birthday, but she was still experiencing some tummy issues and a generally unhappy disposition, so we had some allergy testing done, all of which came back negative.

When she became inconsolable for almost an entire week early in the summer, we finally realized that she was still dealing with reflux issues, and at that time she went back on Zantac.

At a follow-up appointment with our favorite pediatrician, we discussed our options. She really wanted us to go see a GI specialist but agreed to wait until Sidney’s second birthday to give us time to try some natural remedies such as papaya enzymes (which my Dad began to take when none of the 15 prescriptions he tried helped his GERD and now swears by), probiotics and a gluten/casein/soy-free diet.

When the papaya enzymes and probiotics alone didn’t help, we began to research a gluten/casein-free diet. However — to be honest — I was in overwhelm paralysis as I thought about making such a huge shift to our lifestyle, and I kept putting it off.

One night at a meeting with some friends, I basically broke down talking about everything we were dealing with. They began to share ideas from their experiences (in their own families or with friends), and they prayed for wisdom and peace for us as we began the process.

That night, I set a goal of transitioning her to a gluten/casein/soy-free diet the following Sunday and began researching what exactly that would involve.

Thankfully, Sean and I happened to have a kid-free/work-free weekend planned just days later, and as he watched preseason football, I had some uninterrupted time to research gluten/casein/free recipes.

One of the keys for me was to focus on what she could eat rather than what she couldn’t eat. I did print out the list of unsafe ingredients to refer back to, but I really focused on listing meal and snack ideas that we could refer back to later. (Download or print my gluten/casein/soy-free meal list here!)

Although gluten/casein-free alternatives can be expensive, making a transition for the whole family somewhat cost prohibitive, I looked for meal ideas that could serve the whole family as much as possible.

We pretty much serve all of our kids gluten/casein-free snacks (lots of fresh and dried fruit, popcorn, etc.) since it’s hard to explain to a 2-year-old why her sisters get pretzels or crackers and cheese and she doesn’t.

For other meals, we serve similar foods even when the rest of us are eating casein or gluten — such as rice noodles and pasta sauce when we have baked ziti or taco chicken with corn tortillas when we have quesadillas. The only exception to this so far has been pizza night since I haven’t yet made or purchased a gluten-free pizza crust (she’s used to pizza without cheese since she’s always had it that way), but on the two occasions that the girls have had pizza, she’s handled it surprisingly well.

Overall, I’ve found the transition to be much, much easier than I expected. Remembering to take food for her when we’ll be eating out — such as when Sean and the girls visit his mom or when we recently attended a wedding — has been the hardest part. But our family has also discovered a lot of new foods that we all like, including egg salad and this tomato soup. We’ve adjusted fairly well to making two versions of many meals, and I’ve enjoyed being more intentional and trying new things in the kitchen.

Unfortunately, at three weeks in, Sidney still needs Zantac every other day (as opposed to twice a day), which is an improvement but not quite what we were hoping for, and with her birthday less than a week away, we  may end up at the GI anyway. But she’s also been happier in general, which makes everybody happy, and I think the gluten/casein/soy-free diet has been good for her, even if it didn’t address all of her issues.

Although it’s not an exhaustive list by any means, my hope is that our gluten/casein/soy-free meal list will give other families some meal ideas as well. I would encourage you to double check any of the meals/ingredients listed for yourself, and please let me know if you see anything that may be questionable since we’re just getting started ourselves!

Has your family dealt with any allergies or intolerances? How did you handle the transition to a something-free diet?

Baked oatmeal any way you want it