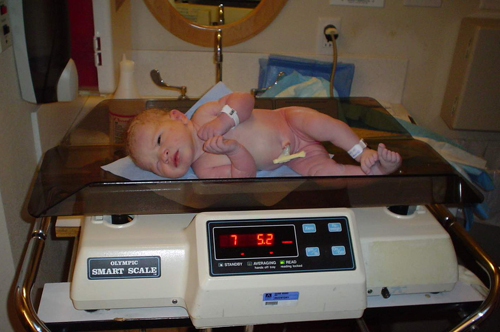 It’s Baby Week at Life Your Way, and I’m sharing my birth stories (with a chance for you to link up with your stories on Friday!) as well as an awesome selection of giveaways. Thanks for joining me as we celebrate the upcoming birth of our fifth baby and first son!

We had originally hoped for a homebirth (I say we, but in truth my husband was terrified of the idea and was a reluctant supporter), but could not find a midwife that we felt comfortable with. So we chose the best doctor in our city and proceeded from there.

I immediately signed up for Bradley childbirth classes and anticipated their start for 4 months.

In the class we learned about the stages of labor, the emotional and physical changes during labor, possible complications, preventative measures, the importance of exercise and good nutrition, and — of course — natural pain management techniques. I hoped and prayed for a fast, easy delivery but prepared myself for a “typical” 13 – 14 hour labor.

At 31 weeks we made our first trip to labor and delivery with what turned out to be very regular, timeable braxton-hicks contractions. No baby that day, but the doctor recommended that I take it easy until at least 36 weeks.

At 36 weeks I had my first internal and my cervix was beginning to dilate and efface. I was so excited and anticipated her arrival with every ounce of my being!

My cervix continued to change over the following weeks, and at 38 weeks I was at 3cm, 75% effaced and the doctor stripped my membranes. That afternoon I began cramping and having sporadic contractions. These contractions lasted all night and at one point were coming 6 minutes apart for a couple hours. Everyone thought the baby was coming. Little did we know!

One week later, I had been having continuous contractions every day and night, and I was not-quite 4cm and 90% effaced at my appointment. At least things were still progressing, but I truly thought “this baby is never coming!” The doctor stripped my membranes again and sent me on my way.

At this appointment, I also received the news that because of a rise in her malpractice insurance premium, my doctor was no longer going to be an obstetrician, she would just continue the gynecological practice. Amazingly, this went into effect immediately, and the doctor I had seen for 8 months and come to love would not be delivering my baby. She had an arrangement with another doctor in our town (the second best) to cover her practice when she was out of town, and she was transferring all of her patients to him. I could have searched for a new doctor, but with just one week until my due date, I resigned myself to the fact that I would not meet the man who was to deliver my baby until it was time to push.

We had a fairly uneventful last week, continuous contractions still, but nothing too painful, and I had kind of gotten used to them at this point. On Saturday night we went out to dinner to celebrate our 2nd anniversary and our last “date night” as a couple without children.

Sunday we went to church and then to Lowe’s to pick up a few things. I remember saying to Sean as we walked through the doors at Lowe’s, “I think today might be the day.” Just a simple comment and then we continued other conversations! 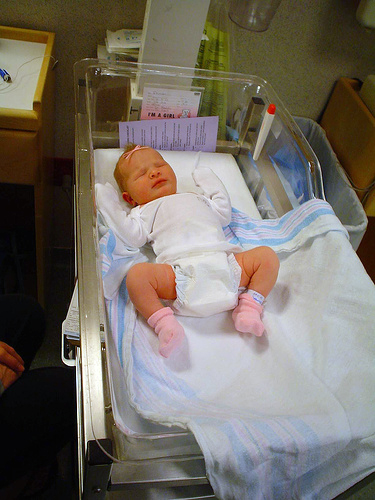 That night we got ready for bed and were sitting in our home office at our computers. I received an email with a multimedia presentation that I wanted Sean to watch, but the volume was turned down on my speakers. I leaned forward to turn the speakers up and felt a slight “pop!” in my abdomen. It wasn’t very painful, but I definitely noticed it! I said “I think my water may have just broken” as I felt a slight leak. I continued playing the presentation, trying to figure out if what I felt was my water leaking or not.

I decided to lay on the couch for a little bit and then get up, b/c I’ve heard this can cause a “gush” if your water is broken. However, within just a few minutes I knew without a doubt that it was my water and I sent Sean to take a shower while I added the last few things to our bags, called our parents, and sent an email to our family and friends.

My contractions began shortly after my water broke, and I could definitely tell the difference between these and the ones I’d been experiencing for so long and these! I wasn’t too worried about timing them, b/c I knew I wanted to go to the hospital and be checked regardless of how far apart they were. I was having a really hard time concentrating on what I was doing, which really surprised me so early in labor.

About an hour later, we headed to the hospital. On the way, I realized that the contractions were coming every 3 minutes apart or so and was glad when we arrived. We checked in and as I sat in the bed being monitored and checked and answering all of the nurses’ questions, the contractions became very painful and were coming 1-2 minutes apart – seemingly on top of each other.

Imagine my disappointment when the nurse said I was at 4cm! No progress – I couldn’t believe it. I asked why the contractions were coming like they were and her response was, “I don’t know – sometimes they just do!”

I begged the nurse to allow me to get in the shower and was very frustrated when we turned on the shower and found that we couldn’t get the temperature below scalding. I pleaded with her to move us to another room, and reluctantly she did. During all of this, my husband was having trouble with the calling card and kept asking me questions. Again, I was very surprised at how hard it was to concentrate, but we wanted to call our parents (who lived across the country at that point) to tell them what was going on.

As I waited for the room change, I began to tell Sean that I didn’t think I could do this without drugs. “Yes, you can,” he said. “You can’t have drugs.” Although this was exactly what I’d coached him to say, I don’t think he understood my level of desperation!

We finally made it to a room with a working shower and the relief was immediate! I would sit with the water on my belly in between contractions and then kneel on a stool with the water on my back during a contraction. However, this only lasted about 5 minutes before I began to feel sharp pressure. I didn’t feel as though I needed to push, but it definitely felt like something was going on. I asked Sean to call the nurse, but when the contraction ended the feeling went away, and I told him we didn’t need to call her.

However, with the next contraction the pressure returned, so I asked him to call the nurse after all. She arrived and asked if I felt like I needed to push. “Would I be able to say unequivocally ‘Yes!’ if I did?” I asked. “Yes,” she said. Hmmm – this confused me even more, b/c I didn’t feel like I needed to push, but the pressure was becoming unbearable. I finally asked her to check me “just in case” and moved from the shower to the bed.

By the way, what they say about your modesty going completely out the window is so true – I think I walked to the bed naked, but who knows! And I didn’t really think about clothes again or who was seeing what until an hour or so after baby girl arrived!

She checked me and said, “Oh! You’re about 9cm.” Being on my back only intensified the pressure, and I was so thankful when she began applying counter pressure against my knees. She called more nurses and had them call the doctor, but everyone was in shock, b/c this was just a little more than an hour after we had arrived and been told that I was still 4cm!

I felt much better knowing that the reason the pain had been so unbearable was b/c I was in transition, and that I would have my natural birth after all.

The nurse did not want me to push b/c she said I had an anterior cervical lip. However, about 15 minutes later the doctor arrived and they said I could begin pushing. At first the pushing brought so much relief and felt so good. However, as her head began to move further and further down, the pain was unlike anything else I’d ever felt, and I literally felt like I was going to tear in two. It was different than what I had expected, and I felt like I was losing control!

I became a bit of a crazy woman, yelling during contractions to “get her out!” and then apologizing when it would subside. Even though I had only been pushing for about 20 minutes, I begged the doctor to do something, anything to get her out. He offered an episiotomy, which was the one intervention I wanted the least, and I gladly accepted!

My poor husband; I had been lecturing him about natural childbirth and the cons of every intervention for months so that he’d be able to support me, and so he asked meekly, “Are you sure that’s what you want? Her head is right there.” “I don’t care; I need her out!”

The doctor performed the episiotomy. By the way, the most horrific sound I’ve ever heard was the sound of those scissors – knowing that he was cutting into my body even though I couldn’t feel it! He told me that I didn’t need to push and gently massaged my perineum during the next contraction and out came her head! What relief I felt! And it was all over with just seconds later at 11:21pm when they laid Peyton Joy on my chest. While they took her to be cleaned up, measured, and weighed, the doctor worked on removing the placenta and stitching me up. A few minutes later they brought her back to me, and as I began to nurse her, the doctor came over, held out his hand and said, “I’m Dr. Lunt, by the way!”

From start to finish, my labor lasted just a few minutes longer than 3 hours – it was nothing like I had expected, but I felt incredible afterwards. I walked to the recovery room 2 hours later after being stitched up and nursing our beautiful little girl. We were released from the hospital at noon the next day, and my recovery was pretty easy. Honestly, I had more pain from our early nursing efforts than I did from giving birth!

It wasn’t long after Peyton’s birth that I began thinking about what I would do differently next time, and because we moved back east at the beginning of our second daughter’s pregnancy, I had a chance to make many of those plans a reality. More on that tomorrow!

Enter to Win a $25 Target.com Gift Card from TradingCradles.com (2 Winners!)