Did you know our family was in Disney World last week?! If you read many posts here or follow me on Instagram, Facebook or Twitter, you probably did. Sorry about that — we were pretty excited leading up to the Disney Social Media Moms Conference!

Our family loves Disney World, and because we have family in Florida, we’ve been lucky enough to make several day trips to the “happiest place on Earth” as well as one longer trip with my parents.

From left to right: me, Amy, Amy, Shannon, Amy & Jennifer

This trip was extra special, though, not only because we were attending an invitation-only conference put on by the amazing team at Disney, but also because some of my closest friends were there too. It’s rare in life to find a group of friends as diverse as this (in background, politics, perspective and more) that gets along so incredibly well, and we were over-the-moon excited that our in-person chat sessions were just as good as our Skype chats and that all of our children and husbands enjoyed each other as much as we do!

Before our trip, Disney announced their brand new Story app, which allows you to tell your own stories in pictures and words and share them on Facebook or via email. I put together a brief recap of our trip with the photos on my phone. Sadly, between juggling a fussy three-year-old and an iPhone battery that kept dying, I didn’t take as many pictures as I’d hoped too, but I love the story that the ones I did take tells:

Some of our favorite moments were attending Merida’s Royal Celebration, the big girls’ first ride on Big Thunder Mountain Railroad (they loved it!), sleeping in an Ariel room at the Art of Animation resort (our two-year-old was asleep when they got there and the next morning she woke up and stood in awe in the middle of the room just taking it all in!) and watching the Wishes fireworks from the courtyard of the Contemporary resort with some of our friends!

Of course, Disney didn’t invite us there just to knock our socks off; they also used the opportunity to tell us about some of the things they have on the horizon. A few of these are really cool, and I’m excited to share them with you as well:

Magic of Healthy Living
Disney’s Magic of Healthy Living initiative is an unprecendented commitment from a major media corporation to encourage healthy eating and exercise habits in children. With new advertising standards in place to ensure that the food promoted to kids meets their nutritional guidelines, the TryIt! campaign to encourage kids to try new foods and activities and the Mickey Check system to highlight and promote healthier foods in the parks and at grocery stores, Disney is a leader in this area.

I, for one, was happy to see lots of fresh fruit and veggie options with all of our meals and at restaurants, concession stands and cafes throughout the parks and resorts!

More FastPass attractions
Our family has never really taken advantage of the FastPasses at Disney, mostly because we’ve been there off-season and haven’t really needed to — although last trip we missed Dumbo completely because the line was so long (we made up for it by riding it twice this year!). However, we did use the FastPass system on this trip, and I’m sold on its benefits now!

Basically, a FastPass lets you hold your place in line without actually standing in line. You insert your ticket into a FastPass machine to print a FastPass that lets you skip the line when you come back during a certain window of time. So, for example, if you go to Dumbo at 1:35pm, and there’s a 45 minute wait, you can head to the FastPass machine and print a FastPass that tells you to come back between 2:45pm and 3:45pm, and when you come back, you get to go through a separate line that basically puts you at the front. Cool, right?

Well, the coolest part is that they announced at the conference that FastPasses are coming to more rides and attractions, including character meet & greets, in the future. It requires a little more planning on your part to make sure you gather your FastPasses and show up when you need to, but the planning is well worth making the most of your time and avoiding long lines, especially in the heat! 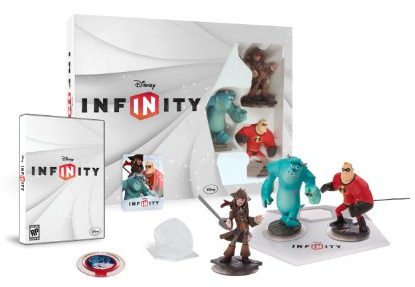 Disney Infinity
Disney also introduced us to their new Disney Infinity game system (available for Wii, Playstation 3 or Xbox 360), which will be released later this summer.

This unique toy-based video game allows kids to create their own games with their favorite Disney characters — customizing play worlds, mingling characters from various movies, solving puzzles and overcoming obstacles. The system literally lets kids design their own games, which they can then share with other players, and the tradeable play sets and figures work on all three systems. This is a video game that harnesses kids’ imagination rather than limiting them to the inventions of the video game creators, and while we’re not huge video game players here, I’m looking forward to getting this for the girls!

P.S. Right now you can enter to win one of three Disney Infinity Starter Packs on Facebook.

This post is getting long, so I’m going to stop there, but be sure to come back tomorrow for my top tips for enjoying Disney World with your family!

We received discounted Disney World tickets and accommodations as part of our conference fee for the Disney Social Media Moms Conference, but as always, all opinions are 100% mine!

Has your family been to Disney World? What is your favorite ride or attraction?

Have You Thought About the National Debt Lately?