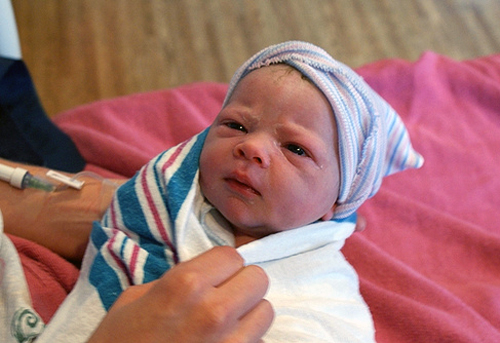 It’s Baby Week at Life Your Way, and I’m sharing my birth stories (with a chance for you to link up with your stories tomorrow!) as well as an awesome selection of giveaways. Thanks for joining me as we celebrate the upcoming birth of our fifth baby and first son!

After three very different birth experiences, I wasn’t really sure what to expect with #4, but I was hoping it would be reminiscent of our second daughter’s birth at the birth center. The doctor who had performed my c-section with #3 was so wonderful that I knew I wanted to see her with the next pregnancy again (even though, once again, I had never met her before she delivered our third daughter!).

Because my last two births had been at 37 and 38 weeks pregnant, we expected that I would go into labor during that timeframe as well, and I was so nervous. We live in the boonies and at the time Sean was driving a delivery route that took him an hour to an hour-and-a-half away during the day. And I was home all day, without any neighbors nearby, with 3 little ones.

As it turns out, I was dilated to 3 centimeters at my 38-week appointment, and my OB  — knowing my history and my concerns — offered to break my water at the hospital.

The plan was to break my water Saturday morning, and we all expected things to progress very quickly based on past experience. We arrived at the hospital at 8:00 a.m. on the dot and were immediately ushered back to a labor & delivery room. We were assigned a nurse, Marianne, and really couldn’t have asked for anyone better to be with us through my labor and Sidney’s birth. She went through the 800 million questions in the computer (the same ones I had already answered twice during false labor visits…) and helped me get into a gown while we waited for the doctor.

Dr. Wade finished her rounds and came to my room at about 9:00 a.m. to break my water, which was uneventful and painless. She told us that she’d be close by and to please let her know when things were getting close. Apparently her last delivery happened so fast that the nurse barely even caught the baby, and she was not looking for a repeat! I stayed on the monitors for about 30 minutes after the amniotomy while we watched Sidney’s heart rate to see how she would react. During that time, I registered one contraction, and it was then that I began to doubt whether things would go as we had expected.

Finally, with a hep lock in my wrist and wearing plenty of pads to catch the continuing gushes of amniotic fluid, Sean and I set out to walk laps around the maternity ward. Our hospital is not very big, and we realized that this was going to be a very boring day if things didn’t pick up quickly!

For about two hours we walked around L&D and the mother-baby unit, and I had maybe 10 contractions during that entire time. I did finally realize that I had more contractions when changing positions — i.e., after squatting or sitting for a few minutes or once I sat down after walking — and so I kept switching things up to try to help the contractions along. The good news was I was still progressing despite the lack of contractions (I was at about 6cm by noon), but it just felt odd to not really have anything regular or predictable.

My sister had a test she couldn’t miss on Saturday morning, and I was really disappointed that she was not going to be able to be at Sidney’s birth, something we had been planning for since we found out I was pregnant. Fortunately, she finished her test early, and when she called to say that she was on her way (but a little bit more than an hour away) at 11:00 a.m., we all started joking that Sidney was just waiting for her to arrive. Sure enough, about 10 minutes before she showed up, I realized that the contractions were getting stronger and definitely coming every 5 minutes or so. By the time she had put her stuff in my room and signed some legal releases for the hospital (acknowledging that some people “have adverse reactions to watching someone give birth” — ha!), the contractions were only about 2-3 minutes apart and definitely stronger.

Lindsay walked with me for maybe 20 more minutes before I decided I was ready to get in the shower, which is my favorite way to cope while in labor. I felt sure that I was approaching transition with as intense as things were getting. Dr. Wade cleared me to get into the shower with many warnings that I needed to get out in plenty of time if I felt any pressure at all.

Here’s where things started to go “wrong”. The problem is I never, ever know when it was time to push. I always wonder if maybe it’s time, but I never feel an urge to push; I just do it when they tell me to. I was in the shower for maybe 10 minutes when I started to wonder if maybe it was time. I got out (this was about 1:15 p.m., I think) to let Marianne check my cervix, which had only progressed to 7 cms, but she didn’t want me to get back in the shower because of how fast things usually go at the end. Honestly, I should have insisted on getting back in the shower — and I think she would have agreed if I had — but I didn’t.

Things definitely were more intense outside of the shower, even with the assistance of the birthing ball, and 10 minutes later I again started to wonder if it was time to push. By then, I had progressed to 8cm, and the nurse decided I needed to stay on the bed (but on my knees or whatever felt good) instead of getting back on the ball. Again, I should have insisted on at least getting back on the birthing ball, but I didn’t.

At this point, I was still smiling and laughing between contractions (although the contractions themselves were requiring me to really focus), but that was about to change. Dr. Wade came in, and we waited through a few contractions (that quite honestly just didn’t feel right anymore — they had gotten shorter and less intense, but almost more painful) before she decided to check me one more time. Folks, the words that came out of her mouth are perhaps some of the most discouraging words I have ever heard a doctor say. “Hmm, you’re back down to a 6 now. But I can still stretch it to an 8.” Yippee?

She asked if I wanted to try to push through a couple contractions to see if we could help things along, and it was quite possibly the worst feeling I’ve ever felt. After a few very unproductive and excruciating tries, she asked if I wanted to try getting back on the ball instead, and I quickly agreed. Within seconds of getting back on the ball the contractions were intense and productive, and I was having to really, really focus during them. I ended up sitting on the ball at the end of the bed (rather than beside it), and I was able to use the stirrups as handles during contractions as I kind of rolled around on the ball. That made a huge difference in my ability to cope.

At some point, I seriously began to doubt my ability to finish what I had started (as if I had any choice at this point…), and a song popped into my head: “Strength will rise as we wait upon the Lord. We will wait upon the Lord. We will wait upon the Lord.” I think I must have repeated those lines to myself 100 times during the next 15-20 minutes. Finally, I said out loud, “I really don’t think I can do this,” to which my husband quickly responded, “Oh, that means it really is time. She always says that.” I just kind of shook my head, as I still didn’t feel the need to push, and Dr. Wade said, “We’re going to trust your husband on this. Let’s get you on the bed.”

Sure enough, I was complete and ready to push, but after the pain of pushing too soon, I was hesitant to even try. However, even though I didn’t feel the need to push, pushing did feel good, and I started pushing with the next contraction. Although it was hard and intense, it felt strangely good too, as if I was finally doing something.

It didn’t take long before everybody was saying they could see Sidney’s head and that it would just be a few more pushes. I started pushing and felt the “ring of fire”, something I’ve never fully experienced because the doctor numbed my perineum the first time and because our second was born in just 3 pushes. This time, however, it took me 2 full contractions of pushing before her head emerged, and it was definitely the most intense feeling of my life. One more push and her shoulders were out, and anyone who’s given birth knows the instant relief in that moment. 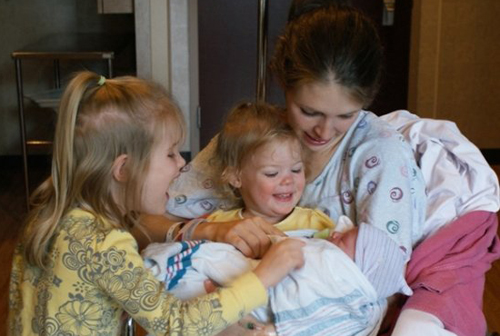 Because I was almost upright as I pushed, I was able to see Sidney right away. She was tiny and still covered in vernix. She didn’t cry a lot but seemed healthy, and her APGARs were 9/9 (the nurse joked that she would have gotten a 10 if only she had peed on the doctor!). Finally, once Dr. Wade suctioned her just to be sure, she laid her on my tummy, and the memory of the pain quickly began to fade. I have to tell you — the nurses and Dr. Wade kept remarking that I was a textbook natural birther and that they couldn’t believe how in control I was during labor and delivery, but it did not feel that way to me at all.

To be honest, I was — am? — a little disappointed that I wasn’t better able to read my body’s cues. Our second daughter’s birth had been so easy and amazing, and I had really hoped to recapture that. Although I did end up needing two stitches, I tore very minimally, and my recovery was a breeze compared to the rest, which was a blessing since I had four little ones under the age of five at that point!

I’m preparing myself for anything this time around and trying to let go of any expectations of what Jackson’s birth will be like. I’ll be sure to share that story once he arrives, but in the meantime, I’d love to hear your birth stories. Come back tomorrow to share your links in a linky!

Question of the Day: Summer Plans

Enter to Win a $25 Target.com Gift Card from TradingCradles.com (2 Winners!)