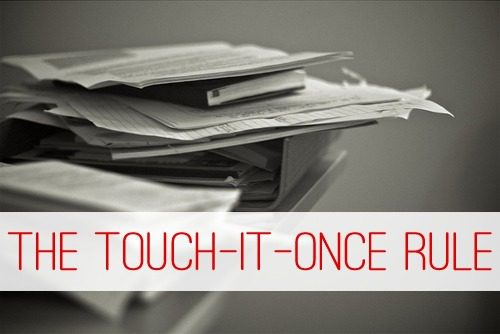 While we often approach decluttering and organizing as one-time tasks, the truth is that that upfront investment is really only half the battle (albeit a very important half!). Once it’s done, you still have to spend a fair amount of time keeping it that way!

There’s really no way around this (other than moving out of your house, sealing the doors and windows and just looking in on it from the outside like a museum piece!), but there is a simple rule that makes it much easier to maintain. We call it the touch-it-once rule.

Most clutter forms when we set something down because we don’t know what to do with it or don’t feel like dealing with it at that moment. When you do that, though, you end up spending twice as much time dealing with it because you still have to go back to it later.

In our home, this is often abandoned hair accessories, arts & crafts that our girls make for us, the stuff we bring inside from the car, dirty dishes in the sink and even trash after opening a package (yes, I did just look around my house to make that list).


Instead of falling into the trap of setting things down to deal with “later”, commit to taking each item to its home right away. Here are a few examples:

My husband and I have both been trying to do this very consciously for the last couple of weeks, and it’s amazing how often we set something down out of habit even though it would have only taken a second to deal with it.

When you get the urge to set something down and deal with it later, think through what obstacles are in the way of putting it away right away.

There are limits to this, of course. For example, we create stair piles fairly frequently because it just doesn’t make sense to run upstairs every time I find a little toy that needs to be put away with the rest of a set, but then I carry as much as I can each time I go up and down the steps so that I don’t have to make special trips. (I’m not sure if that makes me efficient or lazy, but it is what it is.)

The “rule” itself is not nearly as important as creating good habits, which takes practice. To get started, take some time to look at the piles and clutter around your home and think about whether they could be avoided with the touch-it-once rule!

Do you follow the touch-it-once rule in your home? What exceptions to this rule would you add?

8 Great Summer Upgrades to Your House

Being Busy is Not a Badge of Honor

How to Secure Your Home With Smart Home Technology