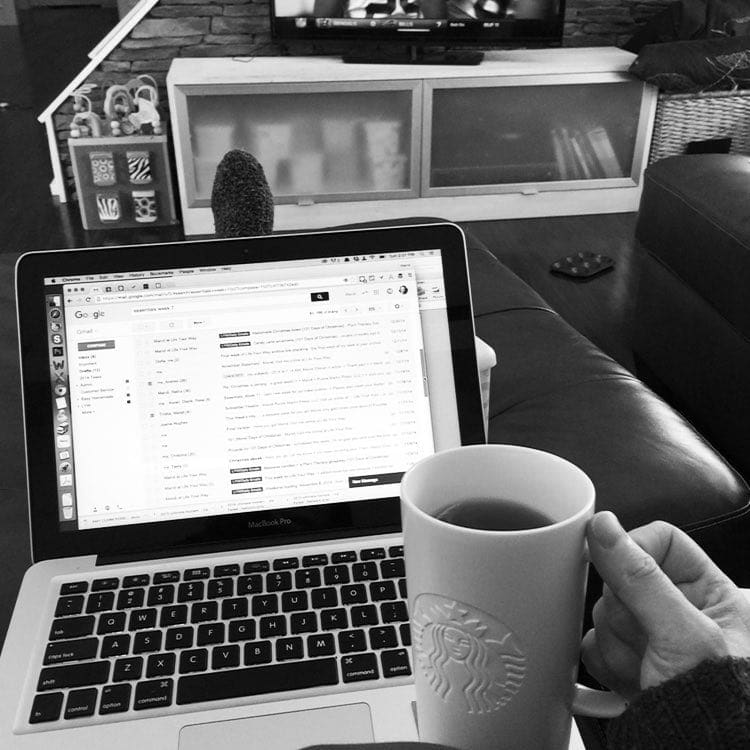 All kinds of things can be said about social media—good, bad and in-between.

It’s true that social media has enabled affairs that might not have otherwise happened, has made cyber bullying a very real concern for children in the new millennium, and has caused people to compare their lives to others and embrace discontent…not to mention that it can easily cross the line from useful to time waster and from healthy to addictive.

But let’s face it—the fault still lies with the people who do those things (myself included for the latter two!), not the social media platform itself.

On the other hand, it’s helped find missing children, reconnected long-lost friends, been used for much good, made the spread of news easier than ever, and given people everywhere a platform and creative outlet when they might not have had one otherwise.

And again, it’s the people who use it for good—not the platforms themselves—who are responsible for that good.

So how do we find a healthy balance for social media in our lives?

I’d wager that it all comes down to one simple rule. Ready?

Use social media authentically and in a way that lifts you and others up, not in the way that other people expect, and that balance will come much more easily.

Now, to be clear, the time waster aspect is still a tough one, and I find myself “zoning” in front of various social media networks when I’m feeling uninspired, tired or bored, which still isn’t healthy! But I have found a way to use social media in a way that benefits my life, rather than detracts from it, most of the time.

Let’s look at a few examples before I share more about my personal approach:

Sharing & Inspiring Others
I have a friend who shares dozens of links on her personal Facebook profile. She’s not building a business, marketing herself or anything else—she just loves to read and learn and challenge, and she shares those things with those of us who are lucky enough to be her friends. I have found so many great things through her links, and when she takes a break to focus on her family or house projects, I miss her posts immensely!

Knowing When to Say No
A group of us recently tried to convince a friend to join Instagram (which really may be the “funnest” social media platform out there, in my opinion), and she felt very strongly that it was not the platform for her. She doesn’t want to focus on taking pictures to share as she goes about her daily life, or have everybody know where she is and what she’s doing, and she’s looking for more privacy than it affords.

Resisting Peer Pressure
A well-known blogger uses Facebook exclusively for her blog page, where she posts regularly and interacts with her fans, but doesn’t have a personal profile at all.

The key in each of these stories is that these women are using social media exactly the way they want to, sometimes in spite of pressures to do it differently.

Personally, I have two Facebook accounts—one “public” account where I accept most friend requests and one I share with my husband where we connect with family, old friends and people I’ve built strong relationships with, even if they’re “imaginary friends” as we like to call online friends.

(Edited to add: This is no longer true! Last year I moved back to a single account, and I’ve enjoyed having a wider circle of people to chat with on Facebook since I made the change. I think I needed to be at a place where I was confident about who I am and what I’m sharing before I was ready to do that!)

I use the personal account most of the time, rarely logging into the other one, to stay connected to friends and family, share what’s going on in our lives — the good, the funny/cute and the ugly — and to hear what’s going on in theirs.

A year or so ago, I actually unfriended more than 100 people and went through and unliked dozens of pages because my News Feed was becoming so crowded that I was missing the things that mattered most to me. Facebook has made great strides since then in making the important stuff accessible, but I discovered a couple things:

1. I interact more with the people/pages that I didn’t unfriend/unlike now that I’m not overwhelmed by it all.

2. I am not as worried about the things I post since the people I’m still friends with are people I truly value and (I hope) value me.

I do accept new friend requests from old friends even if we haven’t talked in a long time, because I’ve reconnected with some great people through Facebook, but I’m not afraid to unfriend them (such a harsh term, really) if that connection just isn’t there after a while

I also have a Facebook page for each of my blogs, and I love connecting with readers in that informal, conversational environment.

Here’s the thing, though — I really am not a fan of Twitter. I’ve tried, and I know other people love it. But it’s just not for me.

I still use Twitter, mostly to share new Life Your Way posts and other posts I’m reading through my Tumblr, but that’s about it. I’ve read all the posts about not using Twitter just to share links and how important interaction is and blah, blah, blah, but that just doesn’t work for me, and I refuse to knuckle my way through and be inauthentic just because it’s “supposed” to be done a certain way.

Pinterest, on the other hand, is another one of my favorites. I love discovering new things through other people’s pins (if Pinterest made following users back easier, I’d follow everybody back who follows me, but it’s not quite that simple when you have lots of followers, unfortunately, so I know I’m missing out on some of your great pins!), sharing cool things through my own pins, and seeing what things from Life Your Way resonate with pinners.

But, even though it’s one of my favorites, there are times when I get pinned-out. Although it’s one of my “daily tasks” (I love when I can list a fun thing as a business task!), if I find myself kind of dreading my time on Pinterest, I simply take a few days off. That’s probably another no-no as far as growing a platform, but I use Pinterest for me, and to inspire my followers, so pinning when my hearts not in it just becomes another drain, and that doesn’t benefit anybody.

Similarly, I use Tumblr as a way to save and share all of the great posts and articles I come across, and there are times I add 10-15 new posts a day. But there are also times when nothing really grabs me, or life gets so busy that I don’t have time to go through my Google Reader, and during those times, I simply take a break.

My newest social media addiction is Instagram. Although it’s fun to share a behind-the-scenes look at our life with my followers, I also use it to capture cute moments and fun memories of my kids.

I don’t have a strategy for using Instagram, and I’m not sure I want it to become a business tool instead of a personal one! In fact, I’ve tried to participate in #photoaday challenges many times — just to connect with more people — but I usually only get a day or two into the month before I give up. For me, it’s a fun tool, but not one that I want to control my life, and I have to be careful to pull out my DSLR for higher quality pictures as well. 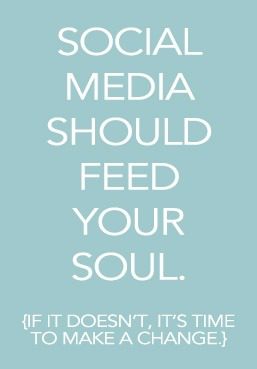 Do you sense a theme here?

Social media should feed your soul.

It should lift you up, encourage you, help you feel connected, etc. If it’s dragging you down, making you doubt yourself or becoming a dreaded task, step away! It will still be there when you’re ready to try again, and you’ll be much happier if you use it in a way that enriches rather than detracts from your life.

How do you use social media? Does it feed your soul?

5-Day Challenge: Define Your Vision for Your Blog