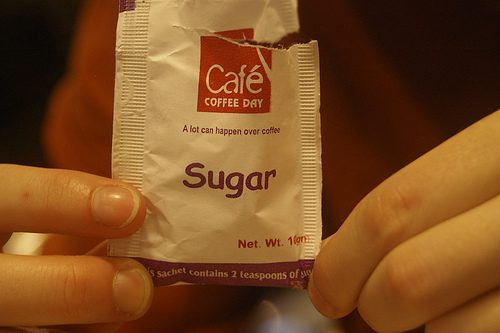 When we set the schedule for the Break the Sugar Habit Challenge, I had hoped that by now — two weeks into the challenge — I would have a long list of benefits to share with you from my own experience. I do have a couple, but they’re maybe not as clearly defined as I hoped they would be. (There’s still two weeks left in the challenge, so I’m not giving up hope yet!)

First, let’s look at what benefits I expected (or at least hoped) to experience:

Now, let’s look at each one in my experience:

About a month before the Break the Sugar Habit Challenge began, I weaned myself off caffeine. I had worked my way up to a triple shot latte every day after lunch, and I was pretty useless without it. I don’t like being controlled by a substance, even one as socially acceptable as caffeine, so I switched to tea and then gave up caffeine altogether. That doesn’t mean I never drink a caffeinated coffee or tea, but my goal is to never have it more than one day in a row or more than twice a week, just because I don’t want to end up back where I was.

Despite eliminating the caffeine, I was still experiencing an afternoon slump, and I was hopeful that eliminating sugar would help me overcome that so that I could regain my after-lunch productivity.

Thankfully, this is one area where I’ve seen results. With the exception of a few random nights of poor sleep, I find that I can continue to work through the afternoon slump without feeling like my head is floating in the clouds. Sometimes I’ll get up and do something that requires me to be on my feet and moving around, but either way, I’m able to push through, something I couldn’t have done a month or two ago.

I don’t actually know how much weight I need to lose, because we don’t have a scale, but I’ve been working to exercise and eat better to eliminate a few extra pounds between my waist and my thighs. I had already lost some weight before the challenge began but was still feeling bloated around my stomach and hoped that the challenge would help me lose the remaining weight and that bloating.

Unfortunately, I haven’t really found that to be true at all…at least not yet. Despite eliminating all sugar (and consequently, most gluten), I still feel fairly bloated by the end of the day. However, it has only been two weeks, so I’m still hoping to see some change by the end of the challenge and the months that follow!

This one is almost laughable because at this point I am still experiencing the opposite of mood stability, which I think stems from both the sugar withdrawal symptoms and the time of the month when I started. Like the weight loss, I’m hopeful that by the time my PMS symptoms next show their ugly head I will be experiencing some of those benefits and have more control over my mood and emotions.

The good news is we have not been sick since the challenge began; the bad news is it’s only been two weeks, and we’re in the middle of summer, so that doesn’t really mean much! Ha! I am looking forward to seeing how our bodies respond to various viruses in the coming months, since we don’t plan to add a lot of refined sugar back into our diet once the challenge is over.

Unfortunately, I’m still experiencing sinus headaches, which I had hoped the challenge would help, but that may be something that takes longer to see results from as well.

Finally, an area of success! I have been surprised by my lack of cravings the past two weeks (although I had a rough day on Saturday, and I looked at Sean and said, “I wish I could find something to break the challenge with!”). I think a large part of that has simply been getting it out of the house so that I’m not tempted to cheat when I’m feeling tired or emotional.

I’ve also had a lot of success in exercising self-control, which has given me confidence that I can resist temptation. In fact, yesterday I made Sean chocolate syrup (he’s not participating in the challenge), and I tasted a tiny drop on my finger just to make sure it tasted okay, but I was able to stop with that one taste. A month ago I would have probably had a whole spoonful!

Similarly, I have found that I sense that I’m full much sooner when eating, and I haven’t once gorged myself on a meal or snack because I “couldn’t” stop eating.

By far the biggest benefit of this challenge has simply been being more intentional about eating. Despite our failure (and I have a doozy to share with you on Friday!), we’re making intentional choices about each meal, planning ahead and learning more about the areas we struggle with the most (hint: being out of the house is one of them!).

I’m excited about the habits we’re forming — in our thought process and in our food choices — and how those will be solidified in the coming weeks. 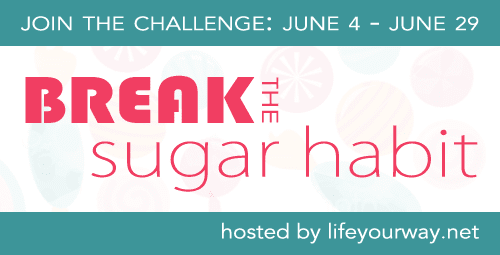 Although we haven’t seen any differences in behavior in our children (unlike with food dye, which has a profound effect on our oldest daughter), Amy has. She’s sharing the insights they’ve gained into the way sugar affects one of their daughters, as well as some other benefits they’ve experienced along the way, over at Kingdom First Mom.

Be sure to check back on Wednesday, when I’ll be sharing links to other people’s stories and the benefits they’ve experienced.

What benefits have you seen from eliminating or reducing refined sugar in your diet?

More Reasons to Give Up Sugar {Break the Sugar Habit Challenge}