I’ve been reading a lot of books about intentional living and parenting over the past couple of months in my quest to reprioritize. I’ll share more about those books soon, but first I wanted to share one of the most impactful changes we’ve made as a family.

While we were in Florida, I read The Abundant Mama’s Guide to Savoring Slow and How to Hug a Porcupine one after another. These books don’t have a whole lot in common, but they did both talk about regular family meetings. Savoring Slow described family meetings as an opportunity to build your family culture and put your values into practice, while How to Hug a Porcupine talks about using them for important conversations with your tweens.

Now, I read good ideas on the Internet and in books all the time and then move on because the timing doesn’t seem right or they’re just not a fit for our family at the moment, but by the time I’d finished both books I knew that this was different and that I really wanted to commit to a weekly family meeting. (It feels a bit like divine intervention that I read these two books when I did, since I can’t say for sure that I would have felt as strongly about it if I’d just read one of them!)

Sean and I talked about it and decided that Sunday evenings would make the most sense and that we’d make them extra special by having dessert afterward each week.

We started Memorial Day weekend, right after we got back from Florida, and when I mentioned it on social media after our second meeting, a few people asked me to share more about what we do. I was a little bit hesitant to do that because 1) I don’t feel like an expert since we’ve only been doing it for four weeks and 2) as silly as it sounds, I don’t want to jinx it by talking about it publicly too much (for some reason it seems like I’m more likely to drop the ball on something after sharing about it!).

Now that we’re a few more weeks into it, I’ll share what we’ve been doing, but keep in mind that we’re just figuring it out as we go and this will likely morph in the coming weeks and months!

Our goal for the family meeting is a mixture of both purposes—to set our family culture and connect as a family, to make time to talk about things like what’s coming up for the week and how everyone can pitch in, and to have important conversations that otherwise get pushed off in the busyness of life.

I. Family compliments
II. Schedule for the week
III. A family challenge
IV. Chore assignments
V. Something else we want to talk to the kids about

I’ll be honest: this takes forever and I spend a lot of time just trying to keep everybody on track. But the idea is that everyone goes around and compliments each member of the family (if you’re keeping track, that’s 42 compliments, since the boys aren’t giving them yet!), and this is the part that everybody most looks forward to. Sometimes these are something funny, sometimes they’re a way to say thank you, and sometimes they’re simply acknowledging something someone has done well during the week. When Lucas cooperates, I keep track of these in a journal, which I hope will be a fun way to look back, even if we’re not quite sure what something like “took nap on the floor” means a few months down the road!

II. Schedule for the Week

This is pretty self-explanatory, but we talk about the schedule for the week as well as anything we need to buy (like a birthday present for someone) or organize (like packing dinner before soccer tryouts). We’re also trying to do a monthly family field trip, so we talk about those during the meeting as well.

We use this time to issue a challenge for the week for something we need to work on as a family. For example, I was tired of constantly reminding everyone to brush their teeth, so we had a tooth brushing challenge one week, and I now draw them a chart each week for them to keep track. Last week we created a checklist for keeping upstairs clean, but we didn’t do a great job of sticking with it, so we’re going to try again this week. And I already know that next week we’re going to focus on table manners because, man, have those slipped recently. That said, I’m not really planning ahead, just seeing what comes up each week that we need to address.

This one is also self-explanatory. We use this time to review and choose daily chores and paid jobs for the week since the girls seem to be more motivated to complete them when they actually have a say in which chores they do.

Life goes by so quickly that I often feel like we’re not being intentional enough about having important conversations with our kids. We’ve used this part of our meeting to talk about things like not just leaving stuff spread throughout the bathrooms after their showers, the words we’d use to describe our family (and if we’re practicing those words—like kindness), and gun safety. I have a list of topics I want to be sure to talk about in the coming weeks—everything from reviewing good touch / bad touch to drugs and addiction as well as Internet safety and how we can serve our community as a family.

The helpful part of having weekly meetings on the calendar is that I no longer lay awake in bed at night going over all the things that I haven’t made time to talk to them about; I add them to the list and choose the one that feels most timely each week. Not only are we having more of those important conversations, but I also feel less pressure to lecture them about all the things at once because I know I can cover those topics in upcoming meetings. 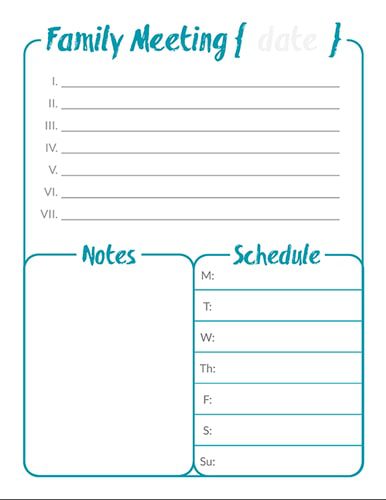 I keep our weekly agenda and notes in my journal, but I created this printable agenda for you to use if that works better for you!

Scheduling Your Day Without Losing Your Mind

The “more” of a big family

The danger of snap judgements