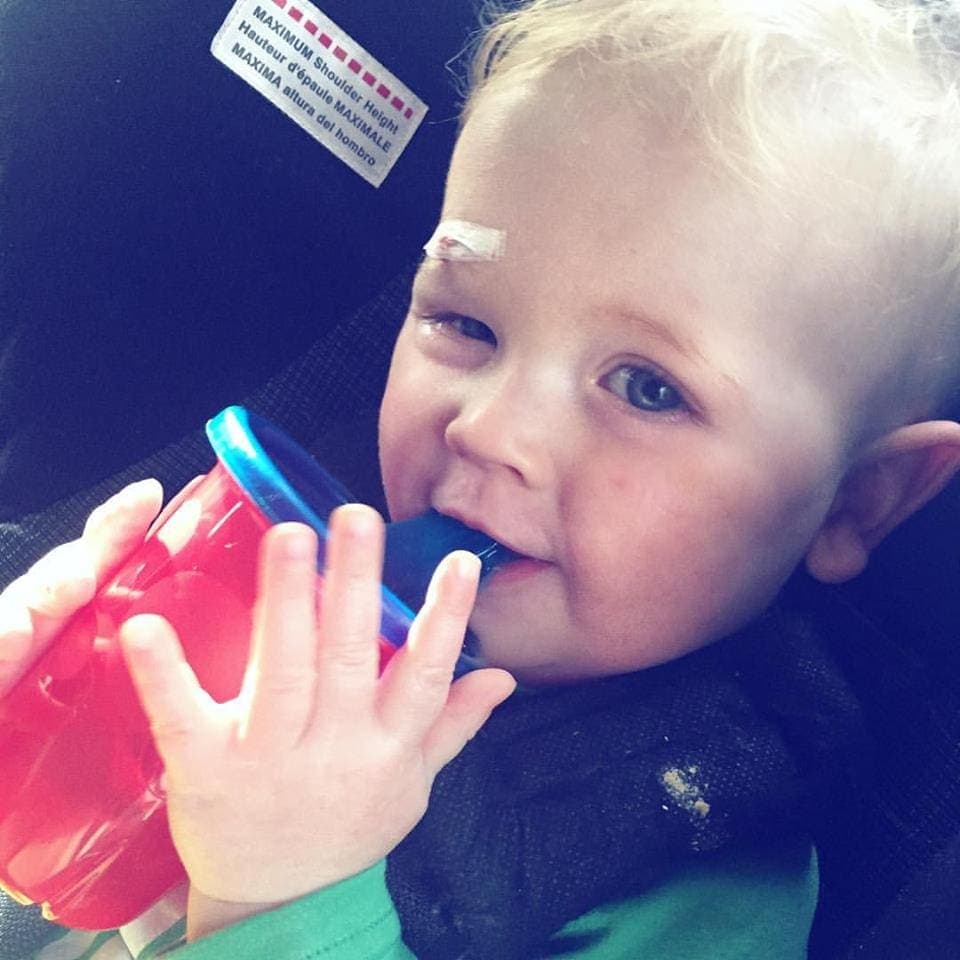 We first noticed the bump on Lucas’ eyebrow when he was 2 weeks old and everyone felt pretty confident that it was a dermoid cyst that would need to be removed by a plastic surgeon in a fairly-simple-but-still-terrifying surgery. I’ve pretty much dreaded that surgery for the past year, but this Wednesday was the big day, and I’m so thankful that everything went even better than expected!

After the surgery, the surgeon told us that he thought it might actually be a sebaceous cyst instead since it was just under the skin rather than under the muscle as a dermoid cyst should be. That means that while his eyelid swelled up significantly and he’s sporting a pretty gnarly black eye, we avoided any of the possibilities of nerve damage, etc.

During pre-op they also told us to expect that he would sleep anywhere from 30-60 minutes following the surgery before we got to see him, and because we’d gotten up at 4:30am to make the drive to UVA and surgery was at nap time, we assumed it would be on the longer end. However, he woke up and reached for a nurse just as soon as they turned off the anesthesia, which meant we were able to go down right away (they were waiting to take us down when we left the consult with the surgeon!) and I got to snuggle him for a good hour and a half before I decided it was probably time to gently wake him up, nurse him, and get on the road home.

He has been exceptionally happy since surgery except when I go longer than 4 hours between his Tylenol doses, which I’m so, so thankful for. In about a week, the steri-strips will fall off (if they last that long with all the rubbing he’s doing!), and we’ll attempt to pull out the single external stitch, which the surgeon said we could do at home rather than making the 2.5 hour drive back down to UVA.

He’ll likely have a red scar for a little bit before it fades and is covered by his eyebrow, and we’re still waiting the official word from the pathology lab, but that should really be it before this all fades into our memory banks!

What I’m reading: Harry Potter & the Goblet of Fire by J.K. Rowling and Full: Food, Jesus, and the Battle for Satisfaction by Asheritah Ciuciu

What I cooked: prosciutto egg cups, whole chicken & chicken stock in my pressure cooker, paleo pumpkin pancakes, crockpot chicken fajitas, and my mom made us ham, cabbage & potato soup while she was here

Kicking off the new year

Encouragement for your homeschool

P.S. Are you registered for our weekly newsletters? I share recipes, tips, printables, deals, and blogging tips {almost} every week!