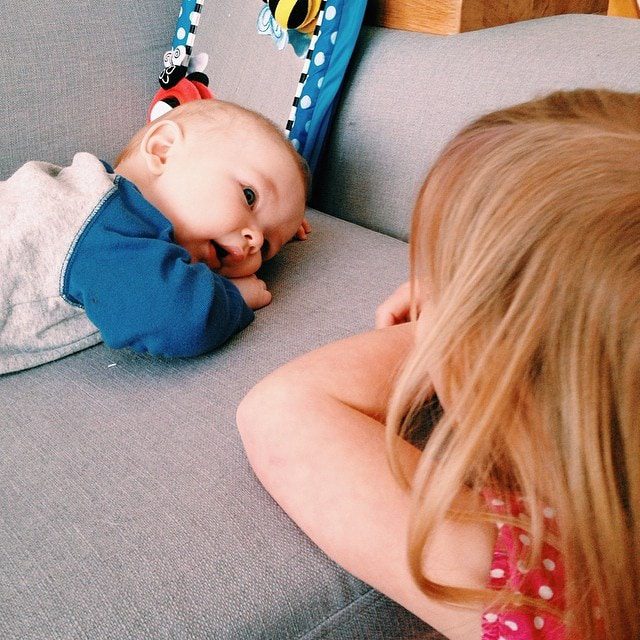 Baby boy is FIVE months old already, and although I am 100% sure that I have savored every moment and cuddle and midnight feeding, I’m still not quite sure where the time has gone!

Although he’s still not rolling over and only wobbly sitting for a few seconds at a time, his personality is really starting to come out. He loves to be happy and only cries when his tummy doesn’t feel good or we’re not paying  attention to his cues that he’s hungry or tired. He wakes up in the morning with a sleepy grin on his face and often goes back to sleep grinning as well!

His sisters continue to ooh and ahh over every move he makes, and his face lights up often at the sight of them.

He’s also started to show his flirty shy side, hiding his face in my neck when someone talks to him, which pretty much slays me every time.

I know this issue has come and gone already for many people this week, but I just need to take a minute to share my thoughts. I don’t think the controversy (with World Vision’s original announcement followed by their reversal) has as much to do with gay marriage as it does with the evangelical community’s willingness to make innocent children pawns of an issue.

I was truly shocked at the number of children who were dropped from sponsorship, and even more so at the church leaders encouraging their congregations to do so. This isn’t about my stance on gay marriage (honestly, I don’t know that I even have a stance other than that people come before an issue every time), but about the children who were suddenly unsponsored by Christians who had not only committed to them but also professed to care about them. My heart breaks not only for those children but also for the message of hate those actions send to gay people about where the Christian community’s priorities lie.

These posts express my thoughts on the whole situation better than I can:

For the Entrepreneurs Among Us