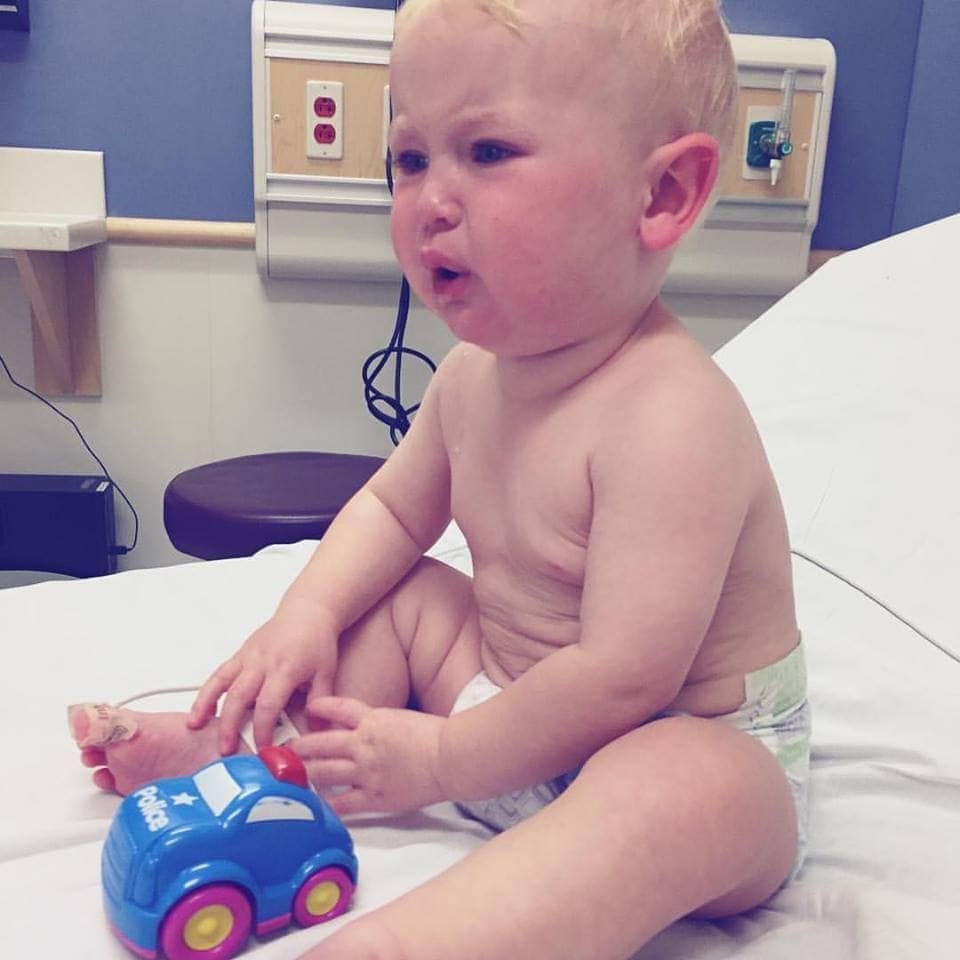 From Instagram: This guy had what we think was a febrile seizure and so our pediatrician’s office sent us to the ER. He is NOT happy about all the poking and prodding, but we’re praying for solid answers!

On Tuesday morning, Lucas woke up in the wee hours of the morning with a mild fever. We snuggled throughout the morning, but he didn’t have any other symptoms and wasn’t particularly fussy, so we never treated the fever. At about 11:30, I set him down for a minute to start lunch and not five minutes later we heard him hit the ground hard and start screaming. At first I thought he’d fallen off the ottoman (turns out he’d just fallen over flat from standing up), but when I picked him up I could feel him seizing in my arms.

Because I tend to do well in emergencies (as opposed to dealing with everyday stresses, lol), I calmly called to Sean, “I think he’s having a febrile seizure. It’s okay, but please come.” Sean said Lucas’ eyes were rolling back in his head, which I’m thankful to not have seen, and he continued crying the whole time.

When he finally stopped (our estimate is that it was just 30-60 seconds), I quickly handed him over to Sean while I called the pediatrician, who directed us to head to the ER. Our 10-year-old said she’d come with us, so we buckled Lucas in his seat and the three of us headed out.

At the ER they took us right back and confirmed that his fever had spiked to 103. They gave him both acetaminophen and ibuprofen to bring the fever down. They also did a rapid flu test and attempted a urine culture (which we never were able to get, even after the trauma of a catheter and a collection bag), and when the flu test came back positive, they sent us home with instructions to see our pediatrician on Thursday.

We were thankful for the confirmation that it was a febrile seizure (brought on not by the height of his temperature but by how quickly it spiked) and headed home. That night I sent my alarm for every 3 hours to continue giving him both fever reducers around the clock. But his fever never even started to come back, and so I skipped the 3am dose and continued to check on him every hour. At 7:30 am when he woke up I gave him ibuprofen and again at 1:30pm, but when he still wasn’t showing any symptoms or any signs of the fever returning, I held off on any additional doses.

Amazingly, his fever never came back, and he has never shown any other symptoms of the flu. I don’t know whether his fever annihilated the virus, the test was a false positive, or it was simply a miracle thanks to all of the people who were praying for him, but I was so thankful when he woke up fever free and happy on Wednesday!

And that was enough excitement for the week!

What I’m reading: Healing the Heart of Democracy by Parker J. Palmer and The Bookshop on the Corner by Jenny Colgan

On the menu plan

Have a great weekend! We’re off to celebrate our little man’s THIRD birthday (how did that happen?!).