I set a Goodreads Reading Challenge goal for myself of 100 books in 2013, and I’m making pretty good progress so far, thanks — in part at least — to the Chronicles of Narnia, which are short, easy reads! I don’t know that I’ll read 4 books every week in 2013 (although that would be nice!), but it’s a good way to kick off the year!

Head here to see Katie’s post for this week, as she shares her current reads as well as her thoughts on reading homework for kids. 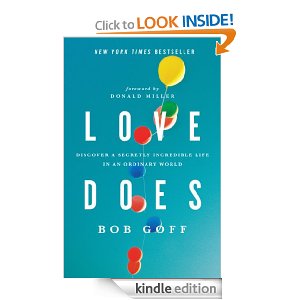 Love Does: Discover a Secretly Incredible Life in an Ordinary World

I’m not sure I can fully express how much I loved this book. Rarely do I read a nonfiction book from start to finish without stopping to read a fiction book in the middle, but part memoir, part motivational handbook, I was actually sad when this one ended. Bob Goff has lived an amazing life — gaining entrance to law school not by his intellect but by persistence, traveling around the world with his children, and rescuing children from slavery in India and prisons in Uganda. Through it all, he lives by one simple principle: love does. It doesn’t just talk or imagine or plan; it does. I’m inspired by Goff’s example, and while I don’t yet know what that will look like in my life (I don’t see a round-the-world trip in our near future!), it is something I’m definitely thinking about more now than ever! 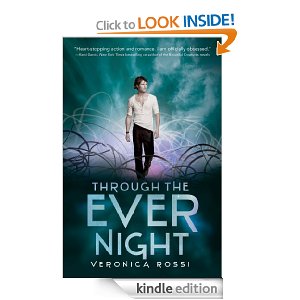 Through the Ever Night by Veronica Rossi

Under the Never Sky was one of my favorite discoveries of 2012. I picked it up on a whim one day when it was on sale for $2.59, and I loved the story so much that I immediately went in search of the next part of the story…only to realize it wouldn’t be released until January of this year. I pre-ordered the Kindle edition and was excited to wake up last Tuesday with it on my Kindle, but I made myself work and do school with the girls before I picked it up!

Part dystopian, part fantasy, this series tells the story of a Aria, a Dweller who grows up inside a carefully control domed world, never stepping foot outside until the day something goes terribly wrong. As she struggles to survive under the Aether — a sky that produces violent electrical storms at random — she meets Perry, an Outsider who is fighting his own battles. At the end of Under the Never Sky, Aria and Perry part ways to fight their own personal battles, but they’re reunited at the beginning of Through the Ever Night and they set out in search of the Still Blue, which — if they can find it — promises them safety for themselves and those they love.

I try to keep my expectations low for the second part of any trilogy because they so often fail to live up to the first book, but this one far surpassed my expectations. It was just as good as the first, if not better, and I’m anxiously anticipating book 3! 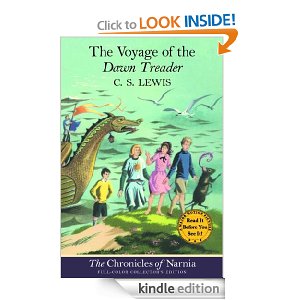 and The Voyage of the Dawn Treader by C.S. Lewis

Prince Caspian — in which Peter, Susan, Edmund and Lucy are called back to Narnia to help the rightful king regain control — was not my favorite Chronicles of Narnia story so far. I found it kind of slow and boring, so it took me a while to get through it.  I did, however, love to see how Edmund had changed since we last saw him in Narnia.

In the Voyage of the Dawn Treader, Edmund and Lucy once again find themselves in Narnia — this time with their disagreeable cousin Eustace Clarence Scrubb. As they sale on the Dawn Treader with Caspian and Reepicheep (the small but valiant talking mouse) toward the east, they encounter adventure after adventure (of course!), and this story definitely ranks up there with The Horse & His Boy as my favorite so far! 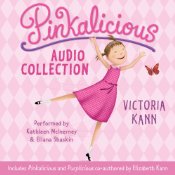 After their request for Boxcar Children last week, I was so excited when our five-year-old asked to listen to Pinkalicious during her afternoon quiet time. I firmly believe that loving stories themselves is a precursor to loving to read, so I’ve been anxiously waiting for our other girls to catch the bug as well!

From Parker (5): “Pinkalicious turned pink from eating too many pink cupcakes, and then she ate green things and turned back to normal. I like Pinkalicious because she likes pink, and I like pink!” 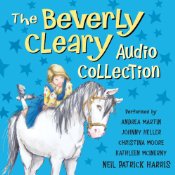 From Dylan (6): “In Beverly Cleary, there’s a girl named Amy, and she has a brother named Mitchell. They’re twins, and they fight a lot. There’s also this guy named Allen Hibler, and he’s a bully. I like that Amy finds a friend after one of her friends moves away from next door.” 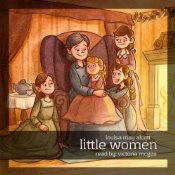 From Peyton (8): “Little Women is about four sisters named Margaret, Josephine, Elizabeth and Amy. Amy is just Amy, but Josephine calls herself Jo, and Elizabeth is called Beth and Margaret is called Meg. Their father helps during the war and their mother works, and Meg is a governess — she’s 16 — and Jo helps her aunt. I like that there are horses in this story, and sometimes the girls tell stories. Once they did a Christmas play because Jo is a bookworm, and they do a play every Christmas. Meg is my favorite character, and Beth has a cat who had three kittens.”

Christian Living eBook Bundle for $7.40 This Week Only {BundleoftheWeek.com}