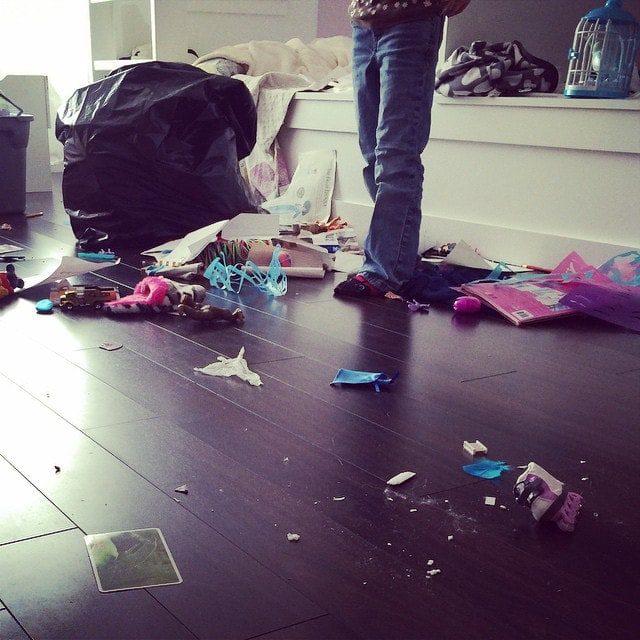 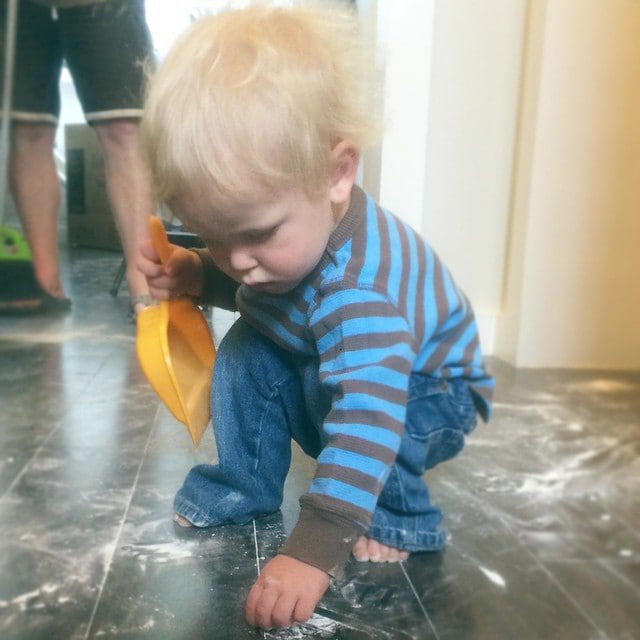 I started blogging about organizing, home management, decluttering and other related topics more than 7 years ago. Back then we had three small children (and then four under five), and I was working full time, but our home ran smoothly, without much clutter.

I don’t know exactly what happened—whether it was the addition of two (soon to be three) more children or their growth as individual people—but our home has felt chaotic lately. Really chaotic. It’s always cluttered, even after a round of ruthless decluttering, and we just haven’t been able to stay on top of things no matter how hard we try.

Getting control of the chaos was already on my “list” for the summer, but with the coming addition of a new little one, it became even more important.

At first, it was hard for me to identify what the problem was, so I spent some time just observing and trying to figure out what our hot spots were so that we could come up with strategies to fix them. Here’s what I’ve figured out: 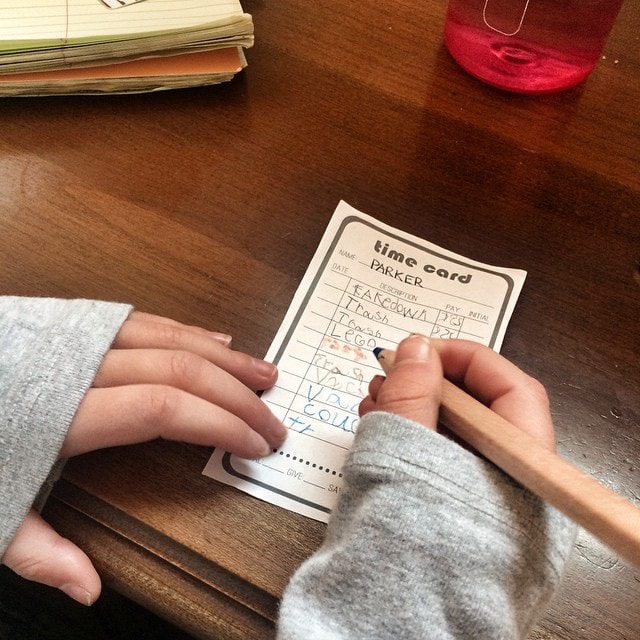 My kids have always had chores and chipped in as part of the family, even from a young age, but somewhere along the way we stopped scaling up with their age and skill level. That left Sean and I doing all of the dishes, all of the laundry, all of the cooking, and all of the deep cleaning.

For the past month, we’ve been ramping up the chores. Some of these are part of their daily “just because you’re part of the family” chores and some are individual paid jobs, but it’s made a huge difference to have everybody pitching in in more concrete ways:

Taking a few of these chores off our plates has freed up Sean to once again work on house projects (he felt like he was spending all day doing dishes) and kept our house cleaner overall.

Ironically, I think the new floor that we put in a couple of years ago actually makes our house feel dirtier. We spent two weeks living at my parent’s house last month (while they were on an Alaskan cruise), and even though we ate the same number of meals and the kids and dogs were in and out just as often, the house stayed cleaner. Here, we clean, sweep and mop, and within 5 minutes the floor feels disgusting again. Sean said it has some kind of static technology that’s supposed to make it easier to clean, which sounds great in theory, but I think it actually attracts dust and dirt. (And it’s dark, so everything shows.) As ridiculous as it sounds, we’re looking forward to replacing the floor again at some point because it makes the house feel so dirty all the time.

Here’s the thing: If you were to look at the possessions of any one member of our family, we’d probably look like extreme minimalists. But multiply that by 8 (because all of the baby stuff I had prepped for consignment is still sitting in the basement waiting for this new little one to arrive!), and it’s a lot of stuff.

I am very, very cautious about how I approach decluttering with my kids. I want to teach them good habits, good strategies, and good limits, but I don’t want to leave them feeling more possessive over their things because they never know if it’s going to be decluttered out from under them. Honestly? I haven’t found a great balance, and that means they each have more stuff than I would like occupying their beds, which is their personal zone.

Because I’m feeling a little lost in this area, I finally picked up Marie Kondo’s The Life-Changing Magic of Tidying Up yesterday and immediately started devouring it. Now, there are some weird principles in this book, for sure, but in the first chapter, she promises over and over that once you follow her system, you’ll never find yourself repeating the cycle again. That’s appealing, y’all! So my goal in the coming weeks is to work through our home one area at a time (I know for sure that our priorities are going to be clothes, books, office/school/art supplies, and then whatever else may follow) to get it under control again and hope that these principles make a lasting difference for us.

Clothing
Clothing is my current nemesis. After feeling like our minimalist approach to clothes was leaving our kids without anything to choose from (and that most of what had been handed down through multiple kids was starting to look ratty), I bought a bunch of new clothes for everybody this spring. But 10 outfits per kid times 5 kids is a lot of clothes! And there are tons of random socks, belts, and clothes that don’t get worn cluttering up those spaces. (To put this in perspective, all four of our girls share one dresser and one small hanging bar; it’s not like we really have a lot of excess here. But the number of kids just makes it much more overwhelming!)

I’m halfway through my pregnancy now and ready to embrace a capsule wardrobe for the remaining 5 months rather than keeping clothes for every stage of pregnancy hanging in my closet (which is just overwhelming). My hope is that if I start experimenting with this now, I’ll be better able to repeat it for those first few postpartum months and beyond!

Other kid stuff
Art and school supplies abound in this house, and they easily turn into a mess. I don’t know what the permanent solution for those are (or even if they’ll be addressed in Kondo’s book), but I’m determined to figure it out.

Our book collection (which is clearly not minimalist) has never been fully organized because our shelves are still under construction (see previous note about Sean finally having time to work on house projects…these are definitely on his list!), and they’ve gotten pretty messy over the last couple of months. That said, I’m pretty sure this is just a matter of taking an hour or two to straighten and reorganize; it’s not really a persistent problem.

Funny enough, I don’t feel like toys are a huge issue. There are a few we’re probably ready to declutter, but for the most part we have a fairly small number of toys that all get played with. I firmly believe that the solution is not more organizing doodads, but we do need some new boxes/baskets to contain a few sets, especially on the baby’s shelf downstairs. 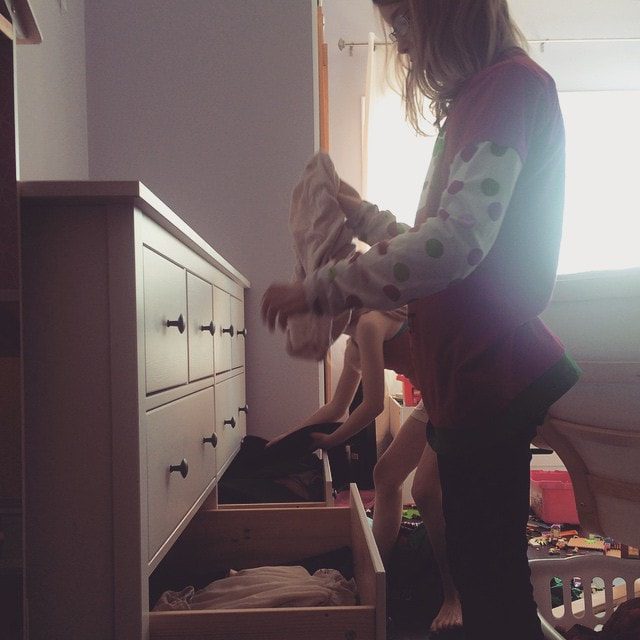 One of our biggest issues is people setting things down wherever they happen to be standing rather than putting them away properly. I’m guilty of this as well, and—again—I don’t think it’s that we’re all slobs who never put anything away. But when 6 different people are setting things on the counter or the foyer table or the steps, it adds up quickly and makes it always feel messy. We can quickly knock these things out at night during our 15-minute clean up, but I’m trying to be a little more proactive about this myself and also reminding the girls to put things away right away or take something upstairs when they go so that we’re not living with the clutter all day every day.

Besides physical clutter, one thing that was making our home feel chaotic was the lack of solid routines for making sure the have-tos get done each day. I’ve used various printed checklists in the past, but I recently reread Sarah Mackenzie’s post about her spiral notebook system, and something clicked. Taking a few minutes to write the girls’ checklists each day—to think about which chores they really need to do that day and who needs a shower, to remind them to get dressed and brush their hair and teeth right at the beginning of the day, and to be able to see what they’ve actually gotten done at the end of the day—is making a big difference. We haven’t perfected the system yet, but I’m looking forward to continuing to practice it this summer before we add in additional school work to their load.

By the way, despite Marie Kondo’s assertion that if you “tidy up” the right way, you’ll never have to do it again, I was relieved yesterday to see that Jen of IHeart Organizing has been feeling this way as well. She’s currently hosting a four-week “wait no more” challenge, with a fun printable to help you get things back in order, so if you’re looking for some accountability, be sure to head over there!

Have you read The Life-Changing Magic of Tidying Up? Anyone else out there feeling like things just aren’t working anymore in your home and it’s time for an adjustment? Please tell me I’m not alone!

Chores for Kids: How We Do It

6 Advantages of NOT Owning Your Dream House 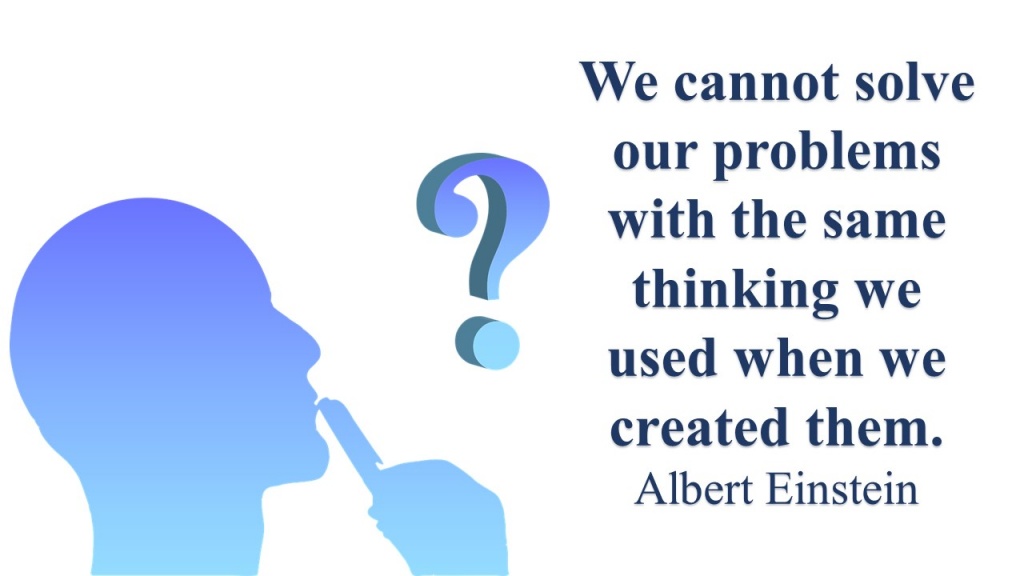