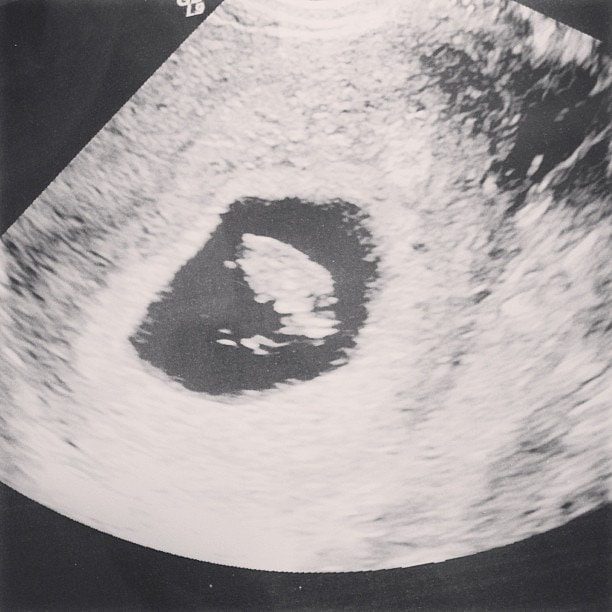 When “we” (meaning society as a whole) talk about pregnancy and miscarriage, we usually approach it from one of two angles—the heart-wrenching pain of a baby lost or the relief of a pregnancy that’s made it through that “danger zone” into the second semester.

Talking about the fear of miscarriage while actually in the first trimester feels a bit taboo as if we’re tempting fate or claiming the inevitable. If we’re really honest, sharing your pregnancy at all during the first trimester is a bit taboo itself (and it seems as if the number of people who wait to share their pregnancies has grown even in the past 12 years since my first pregnancy). I’m not criticizing anyone’s personal decision to wait—and I think it would be fun to keep it a secret that you share only with your husband, even if there is no way I can personally pull that off for more than 24 hours—but I do disagree with the cultural pressure to wait to announce a pregnancy in case you miscarry.

I think that taboo has grown because it’s all a little bit embarrassing: What is wrong with me that my body can’t carry a baby the way it’s supposed to? How will people deal with my grief if I lose this baby when to them the baby is nothing more than a “potential human”? (Even Sean, who very much believes life begins at conception, has trouble attaching to our babies before they really begin to kick and roll and show their personalities.) And because let’s face it, a miscarriage is a lot like a period, except your heart and your tiny baby are bleeding out as well.

When I had my first miscarriage at 21 years old while living thousands of miles from everyone and everything I knew, I was blindsided. Theoretically, I knew that miscarriage was a possibility, but I didn’t have much experience with it and I’d never spoken to anyone about their miscarriage. In fact, I can only think of a couple of people I even knew who had had miscarriages at that point.

But honestly, I think we’re failing young wives and mothers—especially those who are the first in their peer group to get pregnant—by not talking about it more. They’re led to believe that they should keep their pregnancy a secret “just in case,” and they don’t know how to react when a miscarriage happens, especially if no one even knows they were pregnant in the first place.

This is why my girls know about the babies we’ve lost. We’ve named them, we honor their place in our family, and we talk about them regularly—whenever the girls have questions when we unpack or put away their special Christmas ornaments when Father Day’s rolls around each year and I think of the four babies who were each due right around then.

It’s why we tell our girls about our pregnancies right away, reminding them that some of our babies die and go to heaven before we get to hold them but choose to celebrate their lives, however short they may be. If the cause of my miscarriages is genetic and my girls are more likely to experience losses of their own, I want them to have a framework for dealing with that early—not to induce fear and worry but to help them through the grief if it happens.

So today I’m going to talk about it, about the fear of the first trimester when you’ve lost four babies already, about the panic and the tears and the worry.

All of my miscarriages have started the same way: A spot of red blood on the toilet paper or in the toilet, followed by cramping and heavy bleeding within 24 hours.

It seems a cruel irony to me, then, that the early months of pregnancy include an increased amount of vaginal discharge, the feeling of wetness constantly leaving me to wonder if I’m now bleeding.

Despite the surprise of this pregnancy and the fact that we truly felt done and are still trying to work through some of the repercussions of adding another baby at this stage, I am head over heels in love with this little one already. Not just the idea of another baby (and truthfully, if I miscarry, we probably will not try again) but with this baby.

I am trying not to obsess over my symptoms and fears, but I lost my naivety about the guarantees of pregnancy a long time and many miscarriages ago. And while I can’t help but give this baby all of my love, my heart feels like it could shatter into a million pieces at any moment.

I’ve found myself in tears more than once just thinking about the possibility of miscarriage, and I hold my breath every time I go to the bathroom, afraid that this is the moment I’ve been dreading.

In so many areas of life, we have at least some semblance of control. We babyproof our homes, make rules for what our kids can and can’t do, weigh the risks and benefits of various activities to try to keep our little ones safe. We try to make sense of tragedy to reassure ourselves that it won’t happen to us. And deep down, I think we believe that if we try hard enough if we do everything right, we can avoid it.

While I believe that folic acid might play a role in my own miscarriages, and doctors can sometimes prescribe progesterone to support a pregnancy, there’s often nothing we can do to determine whether a baby will live or die in the early weeks of pregnancy. Y’all, that’s hard. Each day, I vacillate between, “If I’m going to miscarry, please let it happen sooner rather than later” and “Please, no blood” every time I go to the bathroom.

I want a list of rules, a list of things I can do to keep this baby safe and healthy and strong, but the rules that do exist—sleep on your left side, no deli meat, soft cheeses or sushi, don’t change the cat litter, don’t smoke or drink, and so on—haven’t played a role in my miscarriages anyway.

In other words, it’s out of my control, and no matter how much I want this baby, how far I’m willing to go, my only option is to wait and see, with prayer and hope and fear and love all coiled together like a knot in my stomach.

Maybe that’s why we don’t talk about it.

My Job as a Hiking Guide