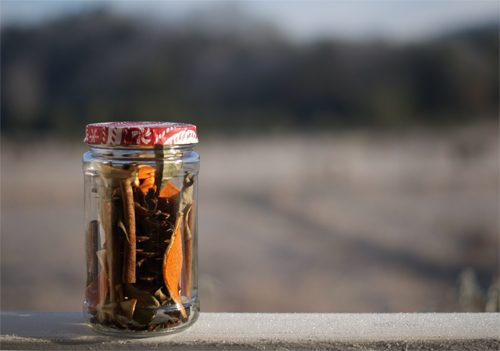 A few months ago, my husband gave me flowers, and I left them in the vase a little too long (oops!). The leaves that began to drop off were so pretty and perfectly preserved, and I just knew I’d be making them into potpourri.

I ended up creating this “cozy winter” potpourri as a gift for a friend, and I keep opening the jar just to smell it because it’s so very yummy!

Be sure to check out the covered lid tutorial as well because it totally makes the jar, don’t you think?

A couple days before you’re ready to assemble the potpourri, peel an orange. I sliced mine into quarters and then peeled each section and sliced it into thinner strips. Set aside to dry for 2-3 days.

When ready, put flowers or leaves in the bottom of your jar. Add a few drops of cinnamon oil to your pinecone. Next, add the pinecone to the jar and surround with more leaves, dried orange peel, cinnamon sticks and cloves.

Note: I also added a couple drops of cinnamon oil to a couple of the orange peels, but it does leave an oil mark, so it’s probably better to stick with the pinecone.

Seal jar with the lid and you’re done!

Variations: Tie a ribbon around the mouth of the jar to add a gift tag or print your gift tag on sticker paper and affix it right to the jar!

Join us as we celebrate 101 Days of Christmas with new DIY projects, gift ideas, traditions and more every day from now through Christmas!