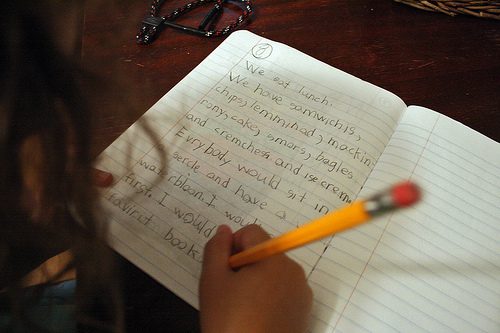 I’ve mentioned before that I had three junior high and high school teachers who each contributed to my success with their negativity rather than encouragement. Instead of building me up, like teachers are supposed to, they really did the opposite, both to my face and behind my back.

Lately, I’ve been thinking a lot about one of the “lessons” that one of those teachers tried to impart.

You see, during the first week of my freshman year of high school, I bombed a quiz. I’d already set my sights on graduating with a 4.0 GPA, and I was crushed. (That didn’t happen in high school because I got  distracted by boys about halfway through!)

After class, I went to the teacher privately and asked if I could make it up with extra credit. I wasn’t looking for an easy assignment; I was willing to work hard to earn that A.

She basically laughed at me and then later used me as an example to tell parents that “some students” would need to accept that they just couldn’t get As all the time.

When I originally wrote about that experience, I wasn’t ready to discuss the pros and cons of extra credit.

But over the past year, it’s become increasingly obvious to me that extra credit IS real life:

I understand that teachers may be unwilling to offer extra credit because it can invite kids to slack off the first time, but no one says extra credit should be easy. I think it’s okay to make the kids work three or four times as hard to make up for the mistake or lack of effort and even to grade the assignments harder than a normal assignment.

But if we want to prepare kids for success,  I think we should be teaching them that they can overcome failure, not that they only have one shot to get it right!

How do you feel about extra credit — in the classroom and in real life?

How to Write a College Essay for Transfer Students?

Why Virtual Classrooms are as Unequal as Physical Ones