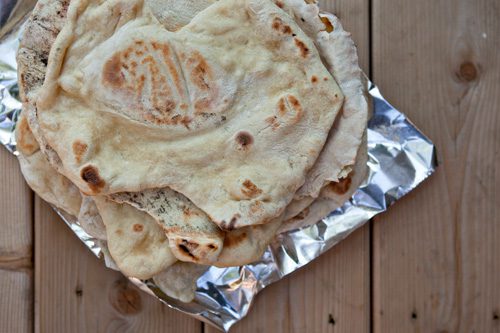 Photos by Shaina Olmanson | Food for My Family

The following post is from Shaina of Food for My Family and Olmanson Photography: Grilled Naan in 5 Minutes a Day

I’ve mentioned before–or at least hinted at–the fact that my husband, Ole, spends a bit of time in the kitchen. The truth is that he is just as integral to dinner preparations as I am most days. However, there is one exception to this rule, and it comes into play when we want to eat bread with our meal. The man would not make bread.

This wouldn’t be such a big deal, really, if it weren’t for his insistence that I make them.

I don’t know what my issues were. Still, I would always run out of time for the rising that needed to happen, so homemade bread was a rarity more than I would have liked, which is why I was pretty excited to discover Zoe’s Artisan Bread in Five Minutes a Day books a year ago, taking the day-off prep away and making it possible to have bread-on-demand for the whole week after one simple stir and rise session on the weekend.

The best part of this method, though, is that it’s so easy Ole has started making the dough himself on the weekends and then baking it on the grill later in the week. The method revolutionized the way we bake bread at home, and it’s made it increasingly easy to add a side of bread any time of day throughout the week.

The naan here has become a family favorite, whether it’s filled with chicken and bean salad, served as snacks with hummus and tabbouleh, or the leftovers serving as the base for homemade naan pizzas.

Grilled Naan in 5 Minutes a Day


Have you tried any of the “Artisan Bread in 5” books?