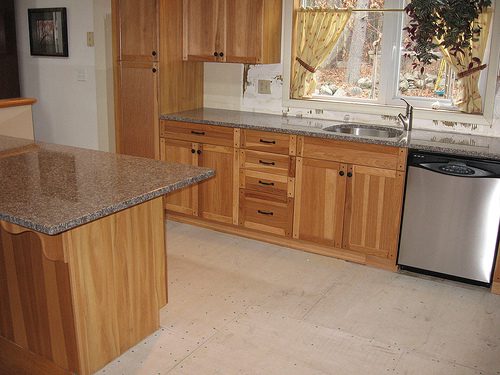 In the comments left on kitchen organizing posts, one of the most frequent problems people share is dealing with counter clutter.

My biggest kitchen challenge is having enough counter space, since the kitchen often serves and the first (and last) rest stop for many odd items (junk mail, missing toy/puzzle pieces/artwork from preschool, etc). I don’t have a lot of counter space to begin with, and need to learn to make better use of the ‘bar’ area. ~RLR, Mom’s Magic

My biggest challenge is balancing how much is out on the counter vs how much gets put away. We try to keep essentials out, but it still seems cluttered and too busy. ~Paula, Welcoming Spirit

My biggest kitchen organization problem is I never seem to have enough counter space and where to put all the stuff I use everyday. Help. ~Kathy

I think this is a common issue for many people and not one that can be eliminated as much as handled. What I mean is that the kitchen is naturally the hub of most homes, and there will always be things that need to be set on the counter for one reason or another. The key is to minimize that clutter and have a plan for what you do with it at the end of the day.

Here are a few methods we use to deal with counter clutter:

For me, a lot of the things that contribute to the clutter on my counters are things I’ve set there because they need to be taken somewhere else to be put away – ponytail holders, crayons, change, etc. Although I don’t follow this rule perfectly, I do try to put as much away the first time I touch it as I can.

3. Clean up the counters at the end of every day.

Chances are you will never be able to completely eliminate the clutter on your counters. However, I’ve found it’s great for my sanity to find a home for everything at the end of each day so that I can wake up to clear, uncluttered counters every morning. Occasionally I’ll leave a project out that I’m working on, but I try not to leave something out just because I don’t know where to put it. Eventually, you’ll have to find a space for it, so decide to do that now rather than putting it off later. Washing the dishes after each meal will help keep the counter from being cluttered.

4. Use a bowl or basket for miscellaneous essentials.

If there are small things you want to keep out, but you’re looking for a way to minimize the clutter, try a basket, bowl, or even a cookie jar on your counter to contain smaller items.

What other tips do you have for minimizing kitchen counter clutter? What things are on your counter right now?

Space-Saving Tips for a Small Home

The Trash Challenge: What’s In Your Trash?

3 Things You Can Skip Buying for a New Baby