The following post is from Shaina of Food for My Family and Olmanson Photography: Quick and Easy Crustless Quiche with Spinach and Sausage 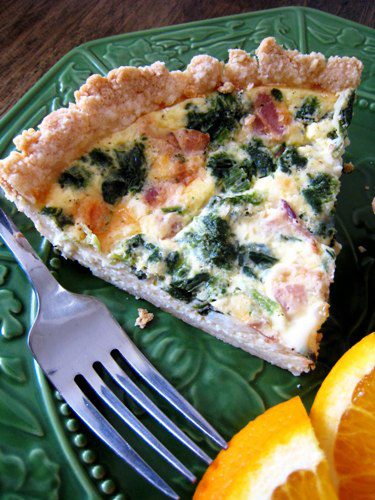 I’ve had quiche on my menu for the last two weeks, continuously putting it off. It’s not that quiche in its traditional sense, with its pastry crust so difficult to make. Still, the thought of mixing and patting out the crust, followed by a good deal of baking and waiting, has simply forced me to turn to more general breakfast-for-dinner options like a pan of scrambled eggs or a few waffles tossed into the iron and monitored by my kids. At the same time, I slice mangoes or set to bacon baking.

My hesitation with crustless quiche is not that I am a purest and believe the quiche needs to be encased in a flaky pastry crust. On the contrary, it’s that I’ve had a wonderful crustless quiche I could never seem to replicate where the eggs were whipped just so and had an almost fluffy bread-like quality to them. Souffle-like without all the whipping of egg whites and worry that it would fall. Little did I know that the answer to my problem was simply upping the ratio of cornstarch to liquid and giving it a whirl when I simply couldn’t put off quiche for dinner any longer.

Crustless Quiche with Spinach and Sausage


What dishes are you afraid of making for they seem impossible to replicate?

Chicken and Noodles: A Bowl of Comfort

The World of Cooking