The following post is from Katie of Kitchen Stewardship: Should We Stock Up on Incandescent Bulbs?

I’m pretty sure we vacuumed when we broke a long, evil-looking fluorescent tube light in our basement about five years ago.

It was a massive shatter, flinging glass and toxins far and wide.

We had a toddler in the house, so naturally, I nearly had a heart attack when I realized what happened.

“[Husband], get out of that room. No, don’t come out here, take your socks off first! We can’t track that stuff through the house. We have to clean it up! No, don’t touch anything, I need to figure out how…”

I Googled how to properly clean up a fluorescent bulb breakage, but apparently, I didn’t do a very good job, because everything I see about the proper clean-up of mercury-containing light bulbs nowadays clearly says, “Don’t vacuum.” Want to know why? It sends toxic mercury dust flying through the air. Lovely.

More importantly, why am I thinking of this scene this month?

I admit I’m worried about the new law going into effect that is phasing out the incandescent bulbs of our childhood and replacing them with compact fluorescent bulbs (CFLs).

Incandescent bulbs basically still operate in the same way as when Thomas Edison designed them – the classic glass light bulb shape, the fragile filament, and the massive inefficiency: for the last 125 years, 90% of the energy sent to those bulbs has been wasted because only 10% is converted to actual light. If I had something in my house that was 90% inefficient, I’d want to get rid of it, too.

Compact fluorescent bulbs, on the other hand, work with the same basic physics (chemistry?) of incandescents, but instead of the filament, it’s mercury and argon gasses that get excited and release light. (More here.)

The energy independence and security act of 2007 (the “energy bill”) intends to “make better use of our resources and help the United States become energy independent. The law provides important benefits to consumers, industry, our country, and our environment,” says the EPA. It was signed by George W. Bush on December 18, 2007 (it’s actually a red flag to see legislation pushed through just before Christmas when no one is paying attention to politics) and went into effect on January first of this year. From this point forward, no new bulbs over 72 watts may be produced.

The law does NOT say that incandescent bulbs must be eliminated, which is how it felt like it was coming across in the media. It DOES require any type of bulb to use at least 27% less energy, which translates into regular incandescent bulbs not measuring up.

CFLs (compact fluorescent bulbs), halogen incandescents, and LED lights will all pass the new standards, but CFLs are the most mainstream available and getting the most press. Specialty globes and 3-way bulbs are exempt from the law.

In the history of lighting, CFLs are fairly new on the scene, and they were immediately touted as an energy-saving miracle. Within a few years of their widespread popularity, their true “green” nature was questioned, but it’s no joke that they have some serious advantages over incandescent bulbs: 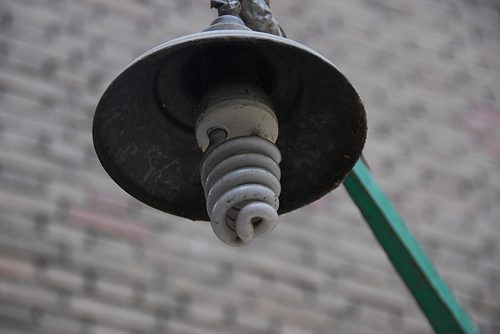 There’s always another side to the story. CFLs have had a tenuous reception among Americans, some of whom take issue with:

And in other news, there are reports of potential health hazards with CFLs, most of which are controversial:

At one point in my research for this article, I was convinced that my trepidation about the new law was hasty, and that CFLs were a good thing for our environment and our nation. I read a number of articles with this information: It turns out that a CFL’s mercury contribution to the ecosystem is actually less than an incandescent bulb when energy use is taken into account.
The EPA estimates the U.S. is responsible for the release of 104 metric tons of mercury emissions each year. Most of these emissions come from coal-fired electrical power. Mercury released into the air is the main way that mercury gets into water and bio-accumulates in fish. (Eating fish contaminated with mercury is the main way for humans to be exposed.)

Most mercury vapor inside fluorescent light bulbs becomes bound to the inside of the light bulb as it is used. EPA estimates that the rest of the mercury within a CFL – about 14 percent – is released into air or water when it is sent to a landfill, assuming the light bulb is broken. Therefore, if all 290 million CFLs sold in 2007 were sent to a landfill (versus recycled, as a worst case) – they would add 0.16 metric tons, or 0.16 percent, to U.S. mercury emissions caused by humans.

How do CFLs result in less mercury in the environment compared to traditional light bulbs?

Electricity use is the main source of mercury emissions in the U.S. CFLs use less electricity than incandescent lights, meaning CFLs reduce the amount of mercury into the environment. As shown in the table below, a 13-watt, 8,000-rated-hour-life CFL (60-watt equivalent; a common light bulb type) will save 376 kWh over its lifetime, thus avoiding 4.5 mg of mercury. If the bulb goes to a landfill, overall emissions savings would drop a little, to 4.0 mg. EPA recommends that CFLs are recycled where possible, to maximize mercury savings.

I found myself wondering whether CFLs take more energy or produce more toxic waste in production than incandescents. It was a tough question to answer, until I found this guy’s analysis of the entire lifetime of a CFL:

Over its full lifetime, a compact fluorescent light bulb will consume 3.9 times less energy than an incandescent bulb. Although CFLs contain mercury themselves, their actual operation will introduce less mercury into the atmosphere than incandescent bulbs due to the fact that coal power plants spew out mercury. If your CFL bulb lasts longer than 50hrs, then it will indeed save energy over its entire lifecycle.

His science is convincing until you read this scientist’s rebuttal, where he posits that just because 90% of the energy put into an incandescent bulb does not turn into light also does not mean it is wasted. It becomes heat, which in turn reduces the heat needed to keep a house warm. In cooler climates, the net energy loss is between 0-50%, not 90%. (Warmer climates are obviously a problem.) He does some fancy math and determines that a CFL is approximately two times better than an incandescent bulb, not the 5-10 times claimed.

Another area of energy use to consider is the shipping of CFLs. Many light bulb factories in the U.S. have closed their doors because making CFLs is much cheaper in China.

And the Chinese factory workers are coming down with – guess what? – mercury poisoning.

There’s also the problem of dead bulb disposal with mercury: although recycling CFLs is becoming easier and is even mandated in some states, it doesn’t mean that the general population will understand the importance of recycling. It’s likely that a great deal of mercury will be traveling in garbage trucks and resting in landfills for the next bazillion years (sorry, I didn’t look up the official figure).

When your CFL bulb burns out, be sure to recycle it – look for receptacles at most major hardware stores, Ikea, and even some mail-in options.

Why Some Folks Are Hoarding Old Light Bulbs

Some Americans are opposed to the new law, whether on the grounds of health uncertainties with CFLs, a rebellion against the perception that the government is telling them what to do, or just because they own Easy-Bake Ovens, which rely on the 100-watt incandescent bulbs for heat. I was tempted to join them but realized I need to know all the information first.

CFLs: Are They for You?

For some folks, the bottom line becomes the difference between what’s best for the earth in general and their personal air quality. Plugging in a CFL is inviting that mercury into your home, where it directly affects the lungs and bodies of your loved ones before it can dissipate into the environment as a whole.

When I consider how often a ball or other flying object has hit lamps in our house – our tattered lampshades are testament to the total – I wonder if a lamp in a living room or little boy’s room is really where I want light bulbs that are toxic when broken. As much as I became convinced that a CFL break might be no big deal and that they really are better for the environment, I’m still disappointed that they will be hard to avoid in the coming years.

What Will the Options Be?

Again, the law does not mandate CFLs only. There are other lighting options that will fit within the new wattage requirements.

I began researching this topic because I felt the legislature had made a knee-jerk reaction with the pre-Christmas passage of the Energy Bill and wondered many things about CFLs: were they safe in all fixtures, would the build-up of mercury be a problem, do they really last as long as they claim, and are they really a greener option? Would this law simply be an official “greenwashing” tactic (and was there corporate money behind it)?

I guess in the end, I’m pleasantly surprised with the results of the research. Not only is mercury and CFLs slightly less of a concern for the environment overall than I thought, but with the other options, all we have to do is be as educated as we can, and we still have a choice for those pesky areas the CFLs don’t seem to compliment.

Hopefully, there will be no reason to hoard the older incandescent bulbs as this law moves through its paces…unless you want a relic from your childhood to fascinate your kids, much like the old 8-track player in my parents’ living room.

What kind of bulb do you prefer? Do you appreciate or question the new law?

A Review of the Brilliant Earth Online Store