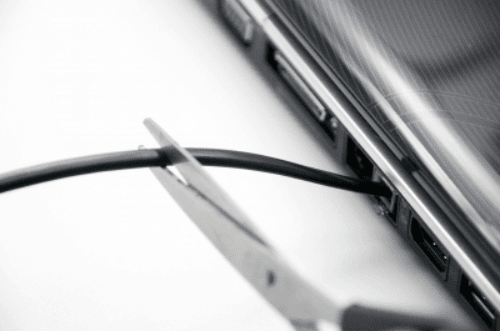 The following post is from Michelle of Mommy Misadventures:

I recently read an article in Sunset Magazine that featured a San Francisco family that chooses to live life almost completely unplugged. The Mission District home of Donovan Corliss and Laura Jo Wegman is almost suspiciously devoid of most of the modern conveniences one would associate with the technology mecca that is San Francisco. Their home contains very little technology: no TV, no laptops, no LED screens, not even a microwave.

Corliss and Wegman are proponents of a movement known as “unplugging”; believing that technology is a distraction, they eschew it in order to make more meaningful connections in life.

It’s well worth the read to learn more about the unplugging movement. Choosing how much technology you allow in your life is a very personal choice, and one that I think everyone should contentiously make. And because I am such a tech proponent, I think consciously chosen “unplugged” periods are essential to developing a good tech/life balance. There’s no rule that mandates that modern life has to be lived with a smartphone.

But as a parent, this statement by Donovan Corliss is what really got my attention: “I think TV and Internet and phones become such a time suck that people feel that they don’t have time for anything else.” […] “They don’t have time to do artwork with their kids or read books or have a conversation with one another.”

As a tech geek who has dreamt of the convenience of the Internet at the palm of your hand since, oh, the mid-1990s, I find statements like Corliss’ to be presumptious and hurtful. Just because I choose to use the Internet doesn’t mean that I don’t make the time to sit down and do an art project with my daughter or have meaningful conversations with my husband. How many times have I found an awesome art project online because of sites like Pinterest which I then did with my daughter? How many times have I read something online that I immediately sparked an animated debate between my husband and I?

While I agree with the importance of “unplugging”, I fundamentally reject its core philosophy that technology hinders meaningful connections in life. I believe that technology is a distraction to daily life only if you let it become one.

Corliss and Wegman both admit to having iPhones and laptops but keep their children’s exposure to it as minimal as possible. In the effort to shield their children from the negative aspects of technology, they also deprive them of the opportunity to learn how to become responsible tech users. Technology is only going to become more accessible and more prevalent in daily life from here on in. Depriving a child from learning how to use technology responsibility now may only backfire in the future.

Rather than shield my daughter, I choose to allow her to embrace it, to understand that technology is a tool that can open countless doors, both virtual and real. I hope to instill good usage habits that will allow her to make informed, contentious usage decisions as technology continues to evolve.   Here are three ways to help instill good computer usage habits in your children:

Set realistic limits for your family AND yourself.

In our family, we have chosen not to strictly follow the AAP’s recommendations. We allow our daughter 1 to 2 hours of non-interactive media watching every day but allow her another 1 – 2 hours of active, supervised interactive screen time for educational video games or web sites. We also limit the times of day she can watch her non-interactive media. It sounds like a lot but she rarely reaches that limit. Despite having liberal access to TV and interactive devices, she most often chooses other activities — mostly art projects or just free play.

If you set tech limits for your children, be sure to set some for yourself as well. These can be as simple as “no smartphone between the hours of 5:00 and 8:00PM” to allow yourself more, meaningful time with your family.

Use technology with your family.

Take an active role in your child’s device use. Evaluate the apps before giving them over to your child so that you know what they are playing.

Leaving children to their own devices – and I do mean that literally, as in a parent will hand over the tablet and let the kids go at it – is a Bad Idea ™. This is how screen zombies are made, how children get sucked into the addictive vortex of animated sight and sound.

Understand how your child is going to use the device. If you have a younger child, use the device with them. My daughter’s active screentime is often spent in my lap as she doodles around on the iPad. Games and interactive story books can be used in much the same way as traditional story books. Do you cuddle with your child when you read to them? If so, there’s no reason that cuddling with your child as they use a tablet or other device should be any different. Encourage your young child to be active and engaged when they are playing. Repeating words or talking about elements of game play while using the device is essential.

If you have an older child, ask yourself: do you know what’s on their tablet? Their phone? Their computer? If the answer is no, it is your responsibility to find out. What does the app do? What does your child use it for? Is the content and purpose appropriate for your family?

What are your thoughts on technology in daily life? Is it really a hindrance or are you allowing it to become one?

7 YouTube Marketing Tips from the Pros (Who Went Viral!)

5 Apps for Back to School