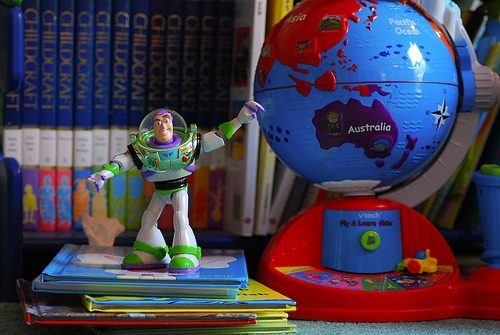 In the wake of Christmas or “birthday month” in September (when three of our girls celebrate their birthdays in three weeks), I wonder if I’m ever going to get around to organizing and decluttering the toys and putting them away. They are showered with gifts from two aunts, three sets of grandparents, and several sets of great grandparents and great aunts & uncles.

We work really hard to limit the number of gifts they receive, but new toys are a fact of life, so organizing and decluttering their toys is also a fact of life.

If you struggle with toy organization, here are my best tips for getting organized and keeping the toy chaos under control:

One Toy In, One Toy Out

What to keep, what to give away? In our house, the rule we follow is “one toy in, one toy out.” I’ve always involved my girls in the process of cleaning out their toys to make room for new ones. Because it’s “normal” for them, they don’t get upset by it but rather help me decide which we should keep and which we should pass on to other kids who might not have as many toys as they do.

Let me start by saying I love toys. I can see the value in many of them, and I have to consciously remind myself that my children don’t need everything just because each has its own benefits or is so cute, or they’d love it.

However, our toy philosophy is actually pretty minimalist. True to what “they” say, my children play better when they have less to play with. They fight less and use their imaginations more, and cleaning up is easier for everyone.

To control the clutter that comes from having too many toys, we have a simple rule: one toy in, one toy out.

Now, we’re not legalistic about this rule, carefully counting each toy they receive to decide how many toys we have to give away. However, we have a wardrobe/cabinet for toys and only keep what will fit in there.

I remember being so upset once when my mom cleaned out my room and gave away some toys that I still wanted to play with (sounds like fodder for several years of therapy, huh?), so we made the decision to include our girls in this process from the beginning.

We explain that there are children who don’t have as many toys as they do – and some who have none – and that when we receive presents and new toys, we share the blessing by passing on some of our other toys. I never add something to the pile that they feel strongly about, although I coach them along the way, reminding them that they haven’t played with X in a while and that they now have Y to take its place.

Often they surprise me by insisting we keep something I thought they’d forgotten about while willingly adding something else to the pile.

How many toys your family has is a decision only you can make. There is nothing wrong with limiting the number of toys you keep, or you may decide that you’d like for them to have a wider variety. However, everything I’ve read suggests that the more toys children have within their reach, the less they play with any one toy in depth.

What is your toy philosophy? It’s important to think about what role you want toys to play in your family. This will in part depend on age, the number of children, if you’re home all day or only in the evenings and on weekends, etc. Whether you want all of the toys available to your children on a given day or want to limit the number within their reach, it’s important to decide ahead of time so that you can design your toy organization around your philosophy.

Knowing your toy philosophy will determine whether you use shelving or cabinets, storage bins, or baskets. If you don’t know what your goal is ahead of time, you may end up with an organizational system that is beautiful and neat but doesn’t quite fit your needs.

I highly recommend cleaning up toy sets at the end of each day (or when they’re done being played with for more involved sets such as a large Lego construction) as an important part of keeping sets nice and together. Cleaning up regularly means you’re more likely to notice missing pieces while you still have an idea of where they might have disappeared to.

The question, then, is how to organize these toy sets. I’ve been known to use a plastic grocery bag in a pinch, but there are lots of other options out there as well:

Several years ago, we purchased 5 plastic Little People bags from Fisher-Price. We use these to store a variety of sets. An added benefit of using a container to store a set of toys is it provides a natural limit to how many you purchase. There’s really no reason that children need the complete set of Littlest Pet Shop, and our storage bag helps us to limit how many we have.

When choosing a storage system, think about whether you want all of your children’s toys to be accessible, or would you prefer a rotating system where only a few are available at a time? Do you keep toys in your kids’ rooms, the family room, a playroom, or a few in each? How do you feel about the toys being spread around the house versus kept in one location? These are all questions you’ll want to keep in mind as we look at different organizing solutions for toys.

Pros: You don’t have to think about which toys to rotate. You simply unpack the bin and repack it with the items that were on the shelves already. It also ensures that toys are getting rotated regularly and that there is a good mix of toys with every rotation.

Cons: There is not as much flexibility in a system like this. If your child suddenly becomes enamored with trains or puzzles, it’s not simply a matter of grabbing those toys off the shelf; you’d have to pull them out of separate boxes, which would defeat the simplicity of this system.

Pros: This system provides a lot of flexibility for choosing the toys that your family seems most interested in at the moment. The toys are easy to get to, and it’s easy to see exactly what you have.

Cons: If your children are younger, it may be harder to limit how many toys they get out at a single time with a system like this. Studies have also shown that children play more intently with toys when they have less options, so that’s something to keep in mind as well.

Cons: If your toys are kept in many locations and you don’t clean up one before moving on to the next, you can end up with a mess that is spread out across your house, making it more overwhelming than a contained mess. Rotating toys is not as simple as with the storage bin method because you aren’t unpacking and repacking a box but just shifting them around, so there are no “new again” toys to pull out.

Of course, these are not rigid systems but rather just guidelines to help you get started. You can mix and match ideas from each system until you have one that works best for your family!

Making It Easier for Kids to Clean Up

Like a lot of moms, I don’t mind the toys themselves as much as I dislike having to clean them up. Our girls do a pretty good job of cleaning up their toys on their own, but there are simple ways to make cleaning up and organizing even easier for them.

For many families, toys are the hardest area to organize and declutter. However, with these simple strategies, it is possible to get control of the chaos!

What is your toy philosophy? How do you organize your toys?

How I Organize My Tea Collection