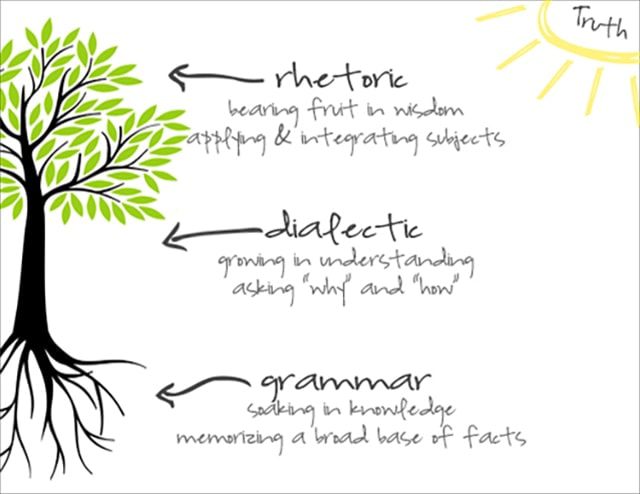 Each summer we attend a Classical Conversations practicum, where my vision for our homeschool is strengthened, our kids get to do a fun academic camp, and I participate in training for my role as an Essentials tutor. This year we’re participating in a practicum close to my mom’s, and I’ve updated this post from a couple of years ago to share what I’ve learned as we head into our 7th year with Classical Conversations!

Let’s talk about what classical Christian education looks like, and then I’ll share why it’s part of our eclectic approach to education.

Classical Education and the Trivium

First, let’s define classical and classical education. When I use this term, I’m referring to a model that focuses on the trivium—a Latin word meaning the three roads—where all learning is broken down into three distinct but overlapping stages that correspond with the natural development of children:

While the stages roughly conform to the elementary (grammar), middle school (dialectic), and high school (rhetoric) levels in the education model, we all actually progress through these three stages naturally whenever we want to master a new subject.

For example, if you’re learning to cook, you must first define the kitchen tools, terms, and measurements used in recipes. Then, you begin to gain an understanding of why recipes are written in certain orders — why we mix the dry ingredients separately from the wet ingredients when making muffins, for example. And finally, you’re able to create your own recipes and teach others to cook. In the future, grammar, dialectic, and rhetoric, as mentioned above, will be quite significant for every student in order to become a good essay writer while studying in higher educational institutions. Professional academic writing is no easy job. There are plenty of resources like https://nocramming.com/ that provide essay services reviews and can leave an unskilled writer without a job very quickly. William Grabe on essayadvisor.com, in turn, helps students to choose the most reliable writing service based on his experience.

The “Lost Tools of Learning” essay from Dorothy Sayers is commonly referenced by classical educators, and she refers to these stages as the poll parrot (grammar), pert (dialectic), and poetic (rhetoric) stages.

And in the Bible, we see the three strains of knowledge (grammar), understanding (dialectic), and wisdom (rhetoric) referenced together, for example, in Proverbs 24:3-4 and Colossians 1:9.

You’ll also see the sun in the corner above, providing that crucial light that is needed to help the tree grow, and that is the thing that sets the traditional classical model apart from the classical Christian model, where the Truth found in God’s Word and our faith provides that much-needed nourishment.

Classical Education and the Integration of Subjects

The other important difference between the classical model and modern education is that subjects are taught as interrelated rather than as separate entities.

While specialization seems to be a buzzword in education and industry right now, I want my kids to see the connections between the subjects as we learn. How do the natural resources in a country affect their politics? What scientific discoveries were being made during the Romantic period of the arts? While this is harder for some subjects than others (like math, for example), I think it’s important to teach these subjects as interrelated rather than as separate entities because they are interrelated, and teaching them in isolation gives us a limited view of the world around us.

Understanding the model itself is great, but it still doesn’t exactly answer the question of why we’ve chosen this model for our children’s education. Although this list is not exhaustive, here are the reasons that this model fits in with our overall philosophy:

NOT to teach them everything.

When I first began thinking about homeschooling, I was determined to teach my kids as much as possible. It didn’t take me long to realize how unrealistic that approach would be and that they’d actually be missing out on a lot if we tried to cram everything there is to know into the 12-13 short years that they’re in school. I love the freedom the classical model has given me to abandon that notion completely.

Instead of trying to teach everything, our goal is to give them deep, strong roots that they can build upon for the rest of their lives. For example, by memorizing the history timeline or learning how to draw and label a map of the world, they instantly have context for the things they hear about as they go through their life. When they hear about an unknown historical figure or something happening in the capital of Mozambique, they will have a way to categorize and place that information within the things they’ve already memorized rather than trying to figure out what was happening around the world in the 1890s and or what continent Mozambique is on before they can really understand the significance of the new information.

To teach them to think, discern, write and speak.

We also want to give them the tools to evaluate ideas and to present their own thoughts, whether through writing or public speaking. The classical model is language-focused, with an emphasis on reading great literature, using copy work to imitate great writers, presenting ideas verbally, and understanding and using the rules of English grammar rather than just writing creatively.

While I don’t spend a lot of time trying to make schoolwork fun (it’s called work for a reason!), I do want my kids to be enchanted by the things they’re learning. I want them to listen to The Lion, The Witch, and the Wardrobe and imagine themselves stepping through the wardrobe into Narnia. Discover that a number is divisible by 9 if the sum of all the digits is 9 and stare at it in wonder. I want them to learn about animals that migrate thousands of miles yearly and stand in awe of their natural instincts. The idea is not to force that enchantment through fun projects and activities but to inspire them to be enchanted by the world around them.

To teach them to learn anything.

Remember I said my goal was not to teach my kids everything anymore? The classical model has given me the freedom to let go of that unrealistic goal because instead of trying to give them an education that covers everything there is to know (which is impossible), our goal is to teach them how to learn so that they will be lifelong learners who can learn anything about anything as they go through life.

I’m not an expert, but if you have questions about the classical model, I’d be happy to try to answer them or find the answer for you!

Advice on Passing the ACCA Exam